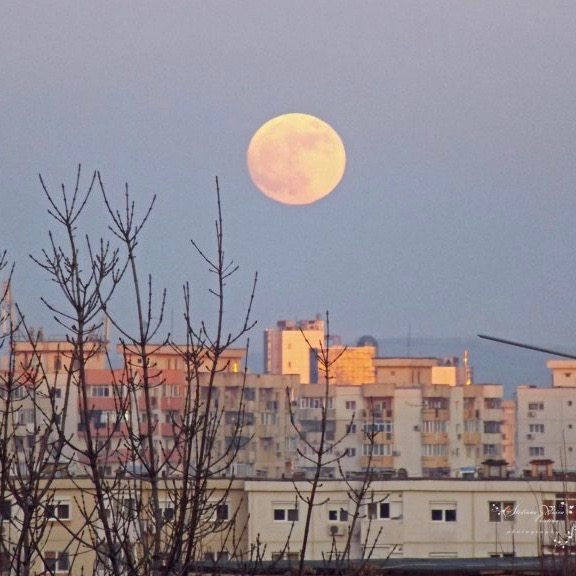 The first of two March 2018 full moons falls on the night of March 1-2, 2018. The second full moon of this calendar month will happen on March 31, 2018. By popular acclaim, the second of two full moons to occur in one calendar month is a Blue Moon.

No matter where you live worldwide, you can always expect to see a full moon lighting up the nightime from dusk until dawn. Because the moon stays more or less opposite the sun throughout the night tonight, look for the moon to rise in the east around sunset, climb highest up for the night around midnight and to set in the west around sunrise.

The moon is said to be precisely full at the exact moment that it’s opposite the sun in ecliptic or celestial longitude. This full moon instant comes on March 2, 2018, at 00:51 Universal Time.

For both the Northern and Southern Hemispheres, the first full moon of March 2018 presents the third of three full moons to occur between the December 2017 solstice and the March 2018 equinox.

In most years, the Christian celebration of Easter happens on the first Sunday after the first full moon of a Northern Hemisphere spring. Sure enough, Easter will come on Sunday, April 1, 2018, the day after the full moon on Saturday, March 31, 2018.

For the Southern Hemisphere, the Blue Moon – the the second full moon of March 2018 – will also be their Harvest Moon, the closest full moon to the autumn equinox.

Bottom line: Wherever you might be on this night – the night of March 1-2, 2018 – enjoy the first of two March 2018 full moons and the final full moon of the season.

Thank you! Your submission has been received!
Oops! Something went wrong while submitting the form.
END_OF_DOCUMENT_TOKEN_TO_BE_REPLACED