Find constellations of the zodiac

Today’s sky chart shows the constellations of the zodiac that are up after nightfall on these October evenings. 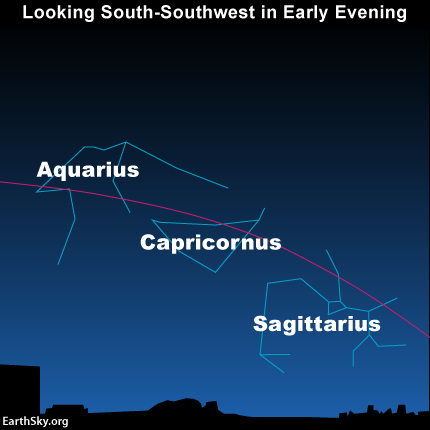 I’m having a difficult time being able to recognize the constellations of the zodiac … do you have any advice?

Yes … we can recommend a few things.

First, the constellations of the zodiac provide the backdrop for the pathway of the sun around our sky each year, and of the moon for every month. Since the sun’s path – or ecliptic – lies within these constellations, you know you can look for them along the approximate path that the sun follows during the day – from east to west across the sky. 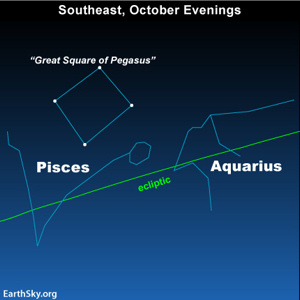 A good star chart will help you find the Great Square of Pegasus on these October evenings. The Great Square can guide you to the zodiacal constellations Aquarius and Pisces. 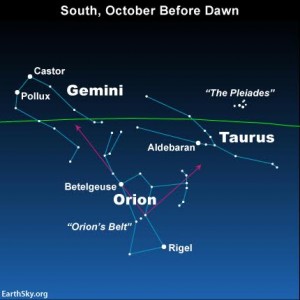 Before dawn, look for the constellation Orion in the southern sky. Star-hop from this signpost constellation to the zodiacal constellations Taurus and Gemini. The green line represents the ecliptic– Earth’s orbital plane projected onto the dome of sky.

Second, be mindful of the moon’s place in the sky, because it passes in front of each constellation of the zodiac for a few days each month. For instance, in the morning sky during the next several days, the waning crescent moon will be passing in front of the constellation Leo. 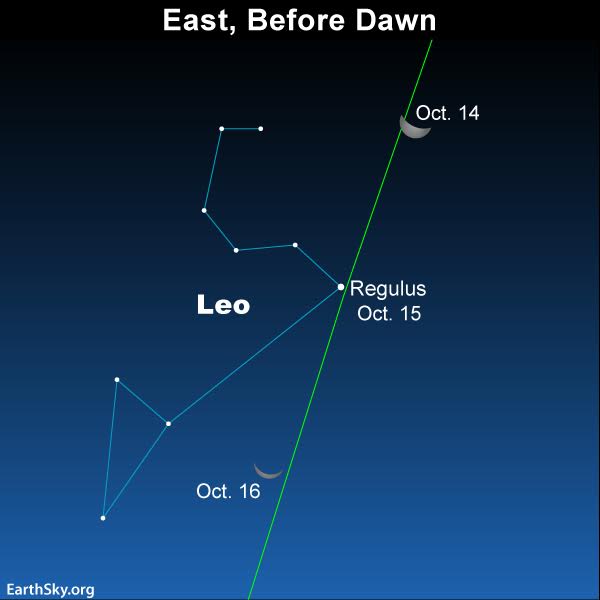 Third, as the years go by, pay special attention to the planet Jupiter, the fourth-brightest heavenly body to light up the sky. It is often called the year star because this planet stays in the same constellation of the zodiac for approximately one year. At present, Jupiter is lost in the sun’s glare, in front of the constellation Virgo, but will return to the morning sky in November 2017. By watching Jupiter from year to year, you can pick out the various zodiacal constellations.

Circle November 13, 2017 on your calendar. Jupiter will be in conjunction with Venus in the morning sky, right at the borderline of the constellations Virgo and Libra.

Fourth, how dark is your night sky? If you’re looking from the city or suburbs, you might not be able to pick out these patterns in the sky. After all, these patterns were identified by people who didn’t have electric lights!

Fifth, get a good star chart. A planisphere is an essential tool for any beginning skywatcher. Just be sure you use a chart that features constellations and not just stars, if that’s what you’re after. Some charts are designed more for people with telescopes, but there are also good books and charts aimed at beginners.

Finally, remember … once you begin to learn the constellations, one will lead to another. For example, you can use the signpost Summer Triangle, which is high in the south to overhead at nightfall on October evenings, to find constellations of the zodiac. As seen from the Northern Hemisphere, the ecliptic swings way below the Summer Triangle. An imaginary line drawn from the bright star Vega through the star Altair points in the general direction of Sagittarius, and a line drawn from Deneb through Altair escorts you to Capricornus.

So have patience! Learning the sky is a lifelong occupation, one that will give you endless pleasure.

For the Southern Hemisphere: You see the same evening constellations of the zodiac that we do in the Northern Hemisphere. But they appear high in your sky instead of close to the horizon. If you want to try using the Summer Triangle asterism, note that it appears “upside down” and low in your north to northwest sky as darkness falls. 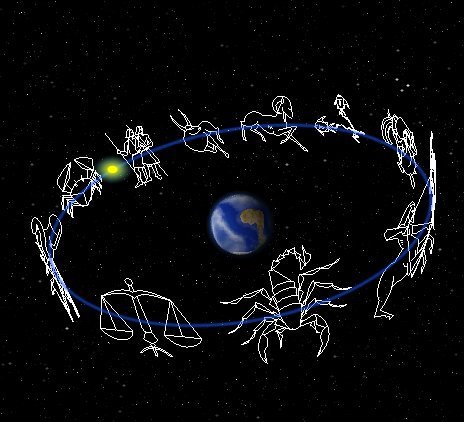 The sun, moon and planets all appear in our sky as if they travel within the boundaries of the constellations of the Zodiac. Image via Discovery News

Bottom line: The constellations of the zodiac follow the sun’s yearly path across the sky. They provide a backdrop to the sun throughout the year and the moon throughout the month. As seen from the Northern Hemisphere on October evenings, the constellations of the zodiac sit rather low in the south, swinging from east to west across the evening sky.