See a star that changes its brightness

Sheliak is a variable star in the constellation Lyra the Harp. You can notice its brightness changes in a cycle lasting 6.5 days. 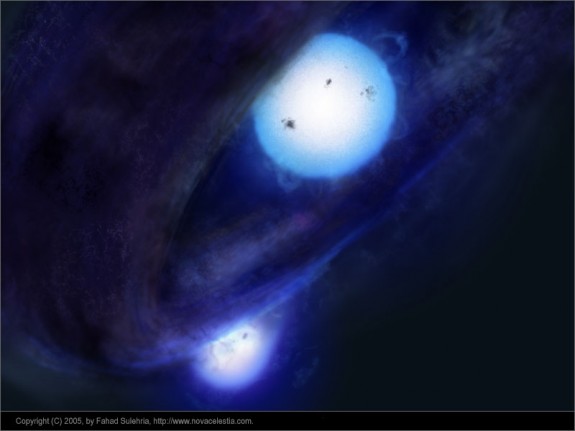 Tonight, we zoom in on a variable star – a star whose brightness changes – near the bright star Vega in the small but distinctive constellation Lyra the Harp.

Here’s how to locate it. A dark sky brings out the four rather faint stars to the left of Vega on December evenings. These stars form a parallelogram – a four-sided figure with its opposite sides equally long and parallel to one another. Three fingers at arm’s length are enough to cover over this small parallelogram of stars.

The two stars shining on the left-hand side of the parallelogram are Sulafat and Sheliak. Sheliak – also known as Beta Lyrae – is the variable star.

This star varies because – although Sheliak looks single to the eye – it’s really a binary star, or two stars that revolve around one another. Sheliak is a special kind of binary star system, known as an eclipsing binary. One star in the Sheliak system blocks out the light of its companion star in regular periods, as seen from our earthly vantage point. This blocking of one star by the other causes Sheliak’s brightness to dim every 6.5 days.

By the way, in our western skylore, the constellation that contains all these stars – Lyra – represents a Harp. In Greek mythology, Lyra was associated with the myth of Orpheus, the musician whose music was so sweet that the king of the gods, Zeus, placed both Orpheus and his harp in the night sky. Lyra was also known as King Arthur’s Harp (Talyn Arthur) and King David’s harp. It was known to the Romans as Tympanum (drum) and Canticum (song).

In our modern times, the star Sheliak keeps a beat of its own – not a musical beat, but a visual one – as this variable star’s brightness waxes and wanes in an observable regularity.

Bottom line: Sheliak is a variable star in the constellation Lyra the Harp. You can notice its brightness changes in a cycle lasting 6.5 days.