Catch Mercury in the morning sky 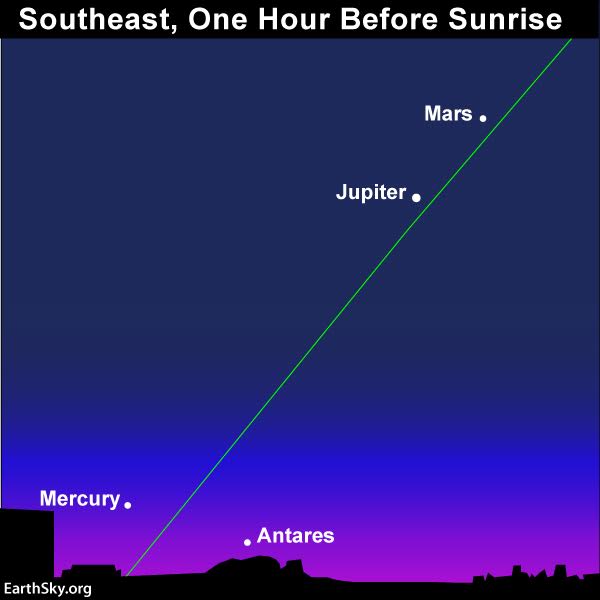 As the year draws to a close, the innermost planet of the solar system, Mercury, is shining in our morning skies. You can easily planet-hop to Mercury by drawing an imaginary line from the red planet Mars through the king planet Jupiter to Mercury’s place near the horizon. No matter where you live worldwide, find a level and unobstructed horizon in the direction of sunrise. That’s because Mercury will sit quite low in the sky, close to the sunrise point on the horizon, as the predawn darkness is giving way to morning dawn.

Although this morning apparition of Mercury favors the Northern Hemisphere, it can be viewed from Southern Hemisphere locations, too. Mercury comes up sooner before sunrise at more northerly latitudes, yet closer to sunrise at more southerly latitudes. At mid-northern latitudes, Mercury rises about one and one-half hours before the sun; but at temperate latitudes in the Southern Hemisphere, Mercury only rises about one hour before the sun. Click here for recommended almanacs that’ll tell you Mercury’s rising time into your sky.

We recommend that you get up some 90 minutes or more before sunrise to see the morning spectacle. Depending on where you reside on the globe, Mercury may (or may not) have climbed above the horizon at this time. But Jupiter and Mars will be up well before dawn’s first light, and they’ll point out where Mercury will be rising into your sky.

Look first for Jupiter, the brightest starlike object to light up the morning sky. And then seek for moderately-bright Mars a short hop above Jupiter. Although Jupiter shines a good 20 times more brilliantly than Mars does, Mars is quite easy to see in the predawn sky.

By the time that Mercury rises into the sky, Mars might (or might not) still be visible. But you’ll be able to remember where on the horizon Mars and Jupiter were pointing.

Do you have binoculars? They can help you to see Mercury when it first rises into the sky and still sits close to the murk of the horizon.

Bottom line: Mercury will be climbing away from the glare of sunrise and brightening in our sky for the rest of December. If you miss seeing the innermost planet before Christmas, try planet-hopping to Mercury via Mars and Jupiter – in the sunrise direction before sunup – over the next several weeks.

Thank you! Your submission has been received!
Oops! Something went wrong while submitting the form.
END_OF_DOCUMENT_TOKEN_TO_BE_REPLACED