“I think it is fair to say that the largest potential sea level rise signal in the next century is going to come from this area.” – Martin Truffer

For the first time, researchers completed an extensive exploration of how quickly ice is melting beneath a rapidly changing Antarctic glacier, possibly the biggest source of uncertainty in global sea level projections. 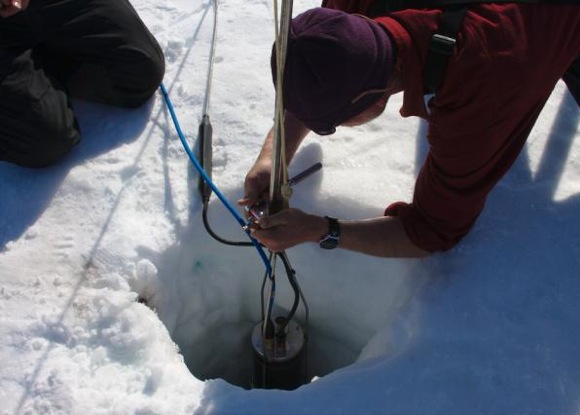 Martin Truffer, a physics professor at the University of Alaska Fairbanks, and Tim Stanton, an oceanographer with the Naval Postgraduate School, were able to look underneath the Pine Island Glacier on the West Antarctic Ice Sheet and take exact measurements of the undersea melting process.

“This particular site is crucial, because the bottom of the ice in that sector of Antarctica is grounded well below sea level and is particularly vulnerable to melt from the ocean and break up,” said Truffer, a researcher with UAF’s Geophysical Institute. “I think it is fair to say that the largest potential sea level rise signal in the next century is going to come from this area.”

Their measurements show that, at some locations, warm ocean water is eating away at the underside of the ice shelf at more than two inches per day. This leads to a thinning of the ice shelf and the eventual production of huge icebergs, one of which just separated from the ice shelf a few months ago.

Their work was highlighted in a recent issue of the journal Science. Both Truffer and Stanton, with other scientists from around the world, have spent years studying the underside of the Antarctic ice shelf and glacier, but the recent research took place in early 2013.

“UAF’s part was to accomplish the drilling,” Truffer said, crediting Dale Pomraning, with the GI’s machine shop. “We have a hot water drill that is modular enough to be deployed by relatively small airplanes and helicopters, and we have the expertise to carry this out.”

The drilling allowed the team to measure an undersea current of warm water, driven by fresh water from the melting glacier. The measurements will be used with both physical and computer models of ocean and glacier systems, said Stanton.

“These improved models are critical to our improved ability to predict future changes in the ice shelf and glacial melt rates of the potentially unstable Western Antarctic Ice Shelf in response to changing ocean forces,” Stanton said.