A first ever study of the range and habits of white-backed vultures across southern Africa shows that they often shun national parks, preferring to forage further afield on private farmland.

A first ever study of the range and habits of white-backed vultures across southern Africa shows that they often shun national parks, preferring to forage further afield on private farmland.

This behaviour and their tendency to scavenge in groups, means that vultures risk encountering dead cattle that have been administered veterinary drugs that are poisonous to them, or even poisoned carcasses intended to control other carnivores such as jackals.

The research, using Global Positioning System (GPS) satellite transmitters to track the movements of adolescent vultures, is published in the journal PLOS ONE.

The white-backed vulture is a widespread but declining species in Africa and it is now listed as endangered. In India, several vulture species are on the verge of extinction due to accidental poisoning from cattle carcasses that contain anti-inflammatory drugs administered by farmers. These drugs are non-lethal to cattle yet fatal to vultures. There is a concern that these drugs could become more widely used in Africa. 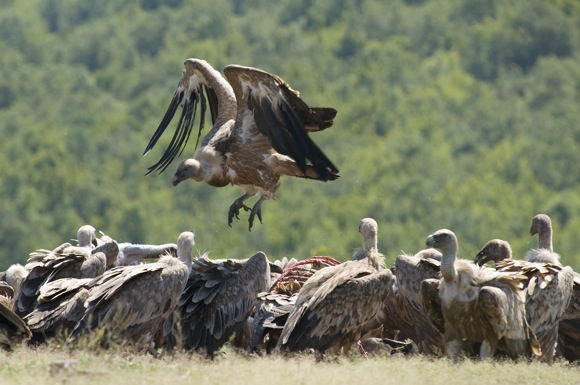 Vultures prefer to feed in savannah grassland habitats and away from other competing carnivores, such as lions, and the new study shows that the birds will go to considerable lengths to find food, crossing multiple state boundaries, with each bird on average ranging across an area twice the size of England.

Co-lead author, Dr Stephen Willis, School of Biological and Biomedical Sciences, said: “We found that young vultures travel much further than we ever imagined to find food, sometimes moving more than 220 kilometres a day. Individuals moved through up to five countries over a period of 200 days, emphasising the need for conservation collaboration among countries to protect this species.”

“In South Africa, the vultures avoided the national parks that have been established to conserve wildlife. As a result, these parks are unlikely to protect such a wide-ranging species against threats in the wider landscape.

“The vultures may actively avoid parks with numerous large mammal predators due to competition for food, and find easier pickings on cattle carcasses in farmland outside these protected areas.

“We found evidence that individual birds were attracted to ‘vulture restaurants’ where carrion is regularly put out as an extra source of food for vultures and where tourists can see the birds up close. As a result, these individuals reduced their ranging behaviour. Such ‘restaurants’ could be used in future to attract vultures to areas away from sites where they are at high risk of poisoning.”

The team tracked six immature African white-backed vultures (Gyps africanus): five for 200 days, and one for 101 days) across southern Africa using GPS tracking units which were carefully strapped to the birds’ backs.

Kerri Wolter, Chief Executive Officer, Vulture Programme (VulPro) said: “Vultures are facing significant threats globally with poisoning being one of the major threats in various forms, such as exposure to veterinary drugs and the irresponsible use of poisons.

“In the past, we believed that protecting nature reserves and conservancies was the way to go but tracking devices show that vultures are spending very little time in protected areas, and this makes conserving these birds much more difficult. Given the distances that vultures forage, we cannot conserve these birds ‘in-country’ but have to work together with conservation organisations, governments and neighbouring countries to safeguard vulture species across the globe.”

Co-lead author, Louis Phipps, who recently graduated from the University of Pretoria, said: “Modern farming practices mean that vultures face an increasing risk of fatal poisoning. The provision of an uncontaminated supply of food, research into veterinary practices, and education for farmers could all be part of a future solution, if vulture numbers continue to plummet.”

Kerri Wolter, Chief Executive Officer, Vulture Programme (VulPro) added: “VulPro approaches vulture conservation in an integrated, multidisciplinary fashion, with the benefits from the programme accruing to both vultures and society at large. VulPro combines education and good science, with networking, capacity building and knowledge generation. The veterinary disciplines of toxicology, pharmacology, clinical pathology and medicine are combined with the science of cell-phone telemetry and the banking of genetic resources, with the goal being to positively influence the well-being of our natural resources to the ultimate benefit of society. In this regard, VulPro engages in a number of interrelated activities, and uses a variety of resources, in endeavouring to meet its objectives.”