The mathematics of leaf decay

The colorful leaves piling up in your backyard can be thought of as natural stores of carbon. Scientists are interested in the mathematics of leaf decay.

The colorful leaves piling up in your backyard this fall can be thought of as natural stores of carbon. In the springtime, leaves soak up carbon dioxide from the atmosphere, converting the gas into organic carbon compounds. Come autumn, trees shed their leaves, leaving them to decompose in the soil as they are eaten by microbes. Over time, decaying leaves release carbon back into the atmosphere as carbon dioxide. 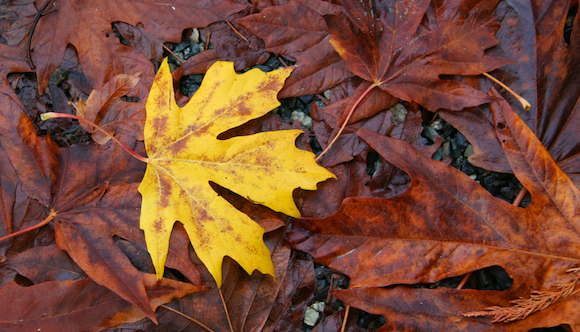 In fact, the natural decay of organic carbon contributes more than 90 percent of the yearly carbon dioxide released into Earth’s atmosphere and oceans. Understanding the rate at which leaves decay can help scientists predict this global flux of carbon dioxide, and develop better models for climate change. But this is a thorny problem: A single leaf may undergo different rates of decay depending on a number of variables: local climate, soil, microbes and a leaf’s composition. Differentiating the decay rates among various species, let alone forests, is a monumental task.

Instead, MIT researchers have analyzed data from a variety of forests and ecosystems across North America, and discovered general trends in decay rates among all leaves. The scientists devised a mathematical procedure to transform observations of decay into distributions of rates. They found that the shape of the resulting curve is independent of climate, location and leaf composition. However, the details of that shape — the range of rates that it spans, and the mean rate — vary with climatic conditions and plant composition. In general, the scientists found that plant composition determines the range of rates, and that as temperatures increase, all plant matter decays faster.

“There is a debate in the literature: If the climate warms, do all rates become faster by the same factor, or will some become much faster while some are not affected?” says Daniel Rothman, a co-founder of MIT’s Lorenz Center, and professor of geophysics in the Department of Earth, Atmospheric and Planetary Sciences. “The conclusion is that all rates scale uniformly as the temperature increases.”

Rothman and co-author David Forney, a PhD graduate in the Department of Mechanical Engineering, have published the results of their study, based largely on Forney’s PhD thesis, in the Journal of the Royal Society Interface.

The LIDET researchers separated and weighed each litter type, and identified litter composition and nutrient content. They then stored the samples in porous bags and buried the bags, each filled with a different litter type, in each of the 27 geographic locations; the samples were then dug up annually and reweighed. The data collected represented the mass of litter, of different composition, remaining over time in different environments.

Forney and Rothman accessed the LIDET study’s publicly available data online, and analyzed each dataset: the litter originating at one location, subsequently divided and distributed at 27 different locations, and weighed over 10 years.

The team developed a mathematical model to convert each dataset’s hundreds of mass measurements into rates of decay — a “numerically delicate” task, Rothman says. They then plotted the converted data points on a graph, yielding a surprising result: The distribution of decay rates for each dataset looked roughly the same, forming a bell curve when plotted as a function of the order of magnitude of the rates — a surprisingly tidy pattern, given the complexity of parameters affecting decay rates.

Going a step further, Forney and Rothman looked for parameters that affect leaf decay rates. While each dataset resembled a bell curve, there were slight variations among them. For example, some curves had higher peaks, while others were flatter; some curves shifted to the left of a graph, while others lay more to the right. The team looked for explanations for these slight variations, and discovered the two parameters that most affected the details of a dataset’s curve: climate and leaf composition.

In general, the researchers observed, warmer climates tended to speed the decay of all plants, whereas colder climates slowed plant decay uniformly. The implication is that as temperatures increase, all plant matter, regardless of composition, will decay more quickly, with the same relative speedup in rate.

The team also found that plant matter such as needles that contain more lignin — a sturdy building block — have a smaller range or decay rates than leafier plants that contain less lignin and more nutrients that attract microbes. “This is an interesting ecological finding,” Forney says. “Lignin tends to shield organic compounds, which may otherwise degrade at a faster rate.”

Rothman adds that in the future, the team may use the model to predict the turnover times of various ecosystems — a finding that may improve climate change models, and help scientists understand the flux of carbon dioxide around the globe.