Solid evidence that Mars had rivers or streams

Mars has vast networks of channels, but hard evidence for flowing water on Mars has been limited, until now.

Despite satellite images that show vast networks of channels, past Mars rover missions have shown limited evidence for flowing water on Mars.

Now, rocks analyzed by NASA’s Mars Curiosity Rover team, including Linda Kah, associate professor of earth and planetary sciences at UT, provide solid evidence that Mars had rivers or streams. This suggests that the environment was drastically different than today’s cold and dry conditions, with the potential to support life.

A paper on the team’s findings is published in this week’s edition of Science magazine.

Since its landing last August, the Curiosity Rover has been looking for clues to whether the Martian surface has ever had environments capable of sustaining, or potentially evolving, life. Critical evidence may include hydrated minerals or water-bearing minerals, organic compounds, or other chemical ingredients related to life. 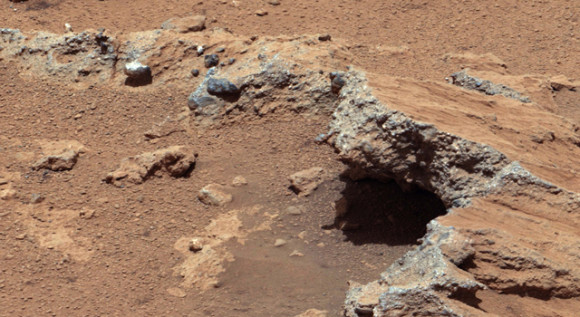 Pebbly rocks testify to an old streambed on Mars. NASA’s Curiosity rover found evidence for an ancient, flowing stream on Mars at a few sites, including the rock outcrop pictured here, which the science team has named “Hottah” after Hottah Lake in Canada’s Northwest Territories. Image via NASA/JPL-Caltech/MSSS 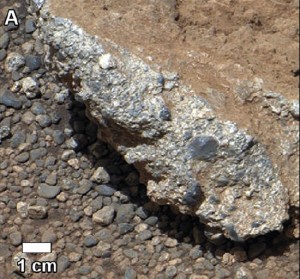 The rocks at these several locations on Mars are the first ever found there that contain streambed gravels. The sizes and shapes of the gravels embedded in these rocks — from the size of sand particles to the size of golf balls — enabled researchers to calculate the depth and speed of the water that once flowed there. Image via NASA

Scientists of the Mars Science Laboratory mission used images collected from the rover’s MastCam, which includes two high-resolution cameras mounted onto its mast. The cameras take full-color images and have filters that can isolate wavelengths of light that provide information about minerals present on the planet’s surface.

As the rover moved from its landing site to its current location in “Yellowknife Bay,” the cameras captured images of large rock formations composed of many rounded pebbles cemented into beds several centimeters thick. While such deposits are very common on Earth, the presence of these types of rocks on Mars has great significance for the Red Planet.

“These (rock formations) point to a past on Mars that was warmer, and wet enough to allow water to flow for many kilometers across the surface of Mars,” said Kah, who helped work the cameras.

The clasts, or pebbles within the rock formation, appear to have been rounded by erosion while carried through water, such as in a stream or river. The size and orientation of the pebbles suggest they may have been carried by one or more shallow, fast-moving streams.

Using published abrasion rates and taking into consideration reduced gravity, the scientists estimate the pebbles were moved at least a few kilometers. Analyzing the grain size distribution and similar rock formations, the scientists believe the river was less than a meter deep and the water’s average velocity was 0.2 to 0.75 meters per second.

“These rocks provide a record of past conditions at the site that contrasts with the modern Martian environment, whose atmospheric conditions make liquid water unstable,” said Kah. “Finding ancient river deposits indicates sustained liquid water flows across the landscape, and raises prospects of once habitable conditions.” 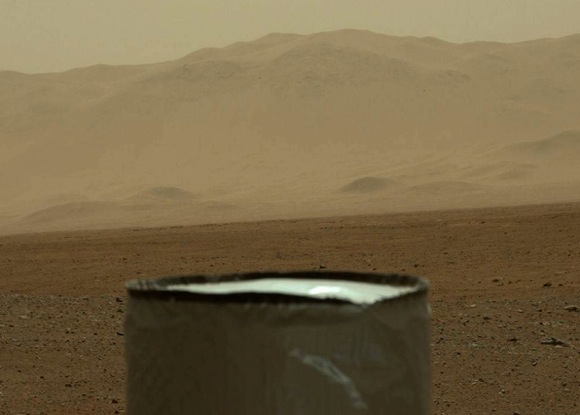 View from Curiosity rover of Gale Crater Mount Sharp, on August 9, 2012, just a few days after the rover set down on Mars.

The Curiosity mission will continue until at least 2014.

Via The University of Tennessee Knoxville