How you can see the star HD219134, announced last week to have the nearest rocky exoplanet. Plus … the star’s proper motion, captured by an amateur astronomer. 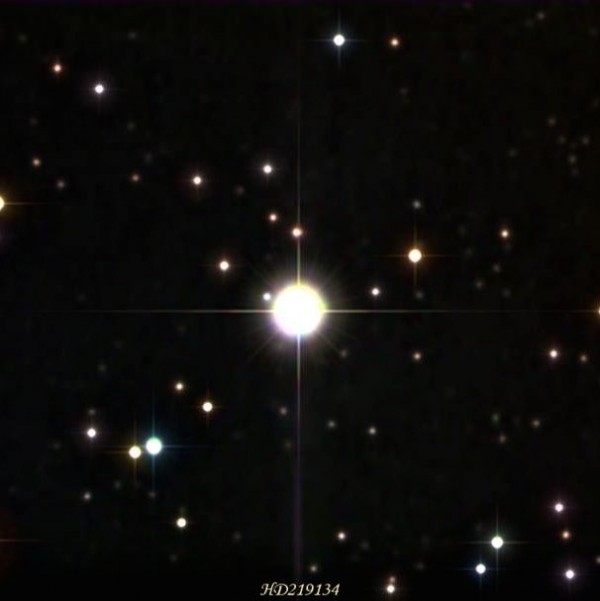 Last week, NASA confirmed that a nearby star being orbited by at least four planets also hosts the nearest rocky planet outside our solar system. The star is HD219134, located 21 light-years (126 trillion miles, 202 trillions km) away. The Italian 3.6-meter Galileo National Telescope in the Canary Islands discovered the planet with its HARPS spectrograph. Further observations with NASA’s Spitzer Space Telescope confirmed the planet’s existence and showed it must be rocky. Astronomer Lars A. Buchhave of the Harvard-Smithsonian Center for Astrophysics in Cambridge, Massachusetts, said:

Most of the known planets are hundreds of light-years away. This one is practically a next-door neighbor.

Astronomers say that the rocky planet – dubbed HD219134b – orbits too close to its star to sustain life. And the planets around this star are too faint to see, even with big telescopes. Special instrumentation was needed to discover them. However, it’s fascinating to realize that its host star – a faint star (5th magnitude) located in the constellation Cassiopeia – can be seen with the unaided eye! 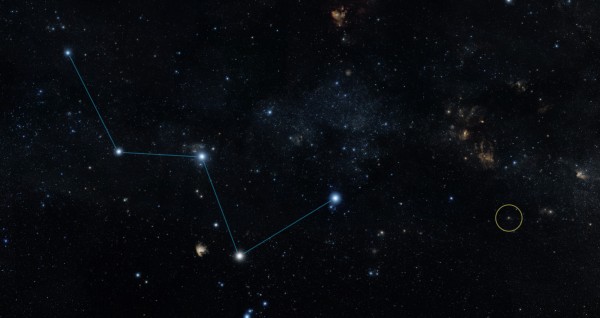 View larger. | You can see the star HD219134 with your own eyes. It’s in the Cassiopeia constellation near the North Star. Image via NASA. 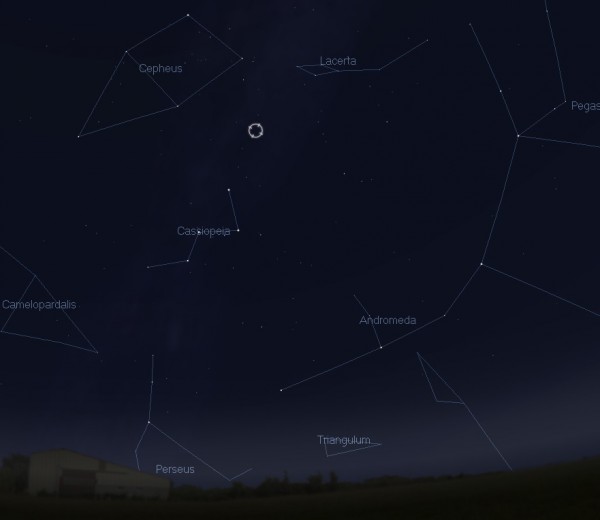 Facing northeast at midnight, as seen from central U.S. and similar latitudes across the world. Location of star HD219134, also known as HIP 114622, is marked by a circle. Illustration by Eddie Irizarry using Stellarium

What’s more, this system is so nearby that even amateur astronomers – who observe carefully and over many years – can capture the star’s proper motion, or sideways motion across the dome of Earth’s sky.

To the unaided eye, the stars appear fixed to the sky, but stars are in constant motion around the center of our Milky Way galaxy. With the eye alone, we can’t see their motion because space is so vast, and the stars’ distances from us are so huge. Their apparent motions across our sky are very small.

But with nearby stars, even advanced amateur astronomers have been able to capture a star’s motion across the sky with respect to more distant stars.

Using a 12-inch diameter telescope, Efraín Morales of the Sociedad de Astronomía del Caribe this week (August 1, 2015) captured a nice picture of star HD219134, host of the nearest rocky planet. To his surprise, when he compared the star photo to a previous picture from the Digitized Sky Survey (DSS), which uses Palomar Observatory and the UK Schmidt Telescope at Anglo-Australian Observatory, he noticed the star had changed its position!

This is the second time I have found another solar system has changed its position when revising my images.

He also captured images of star Gliese 667, which also host exoplanets, and found that two visible stars of the triple star system have drifted, due to their motion through space.

Another interesting star, HIP 87937, known as Barnard’s star is located at only 6 light-years away. After the Alpha Centauri triple star, Barnard’s is the next closest star to our sun. It has the largest known proper motion of any star. This means that if you take a telescopic picture of Barnard’s star and then compare it to a picture taken 3 to 5 years later (or before), you should be able to see the star has changed its position in the sky.

Bottom line: A week ago, astronomers announced that NASA’s Spitzer Space Telescope had confirmed the nearest known rocky exoplanet, orbiting the star HD219134, about 21 light-years away. Finder charts show the star in your night sky. Plus … a gif image showing the star’s proper motion, captured by an amateur astronomer.