NASA satellites capture Super-typhoon Utor before and after landfall

A large number of warnings in remain effect today, Aug. 12, as Typhoon Utor moves through the South China Sea and away from the Philippines.

Four NASA satellites provided data on Super-Typhoon Utor before and after the storm made landfall in the Philippines. Satellite imagery from NASA’s Aqua, Terra, TRMM and CloudSat satellites captured information about the powerful Super-Typhoon on Aug. 11 and 12. That data was used by forecasters at the Joint Typhoon Warning Center before and after Utor hit the Philippines. 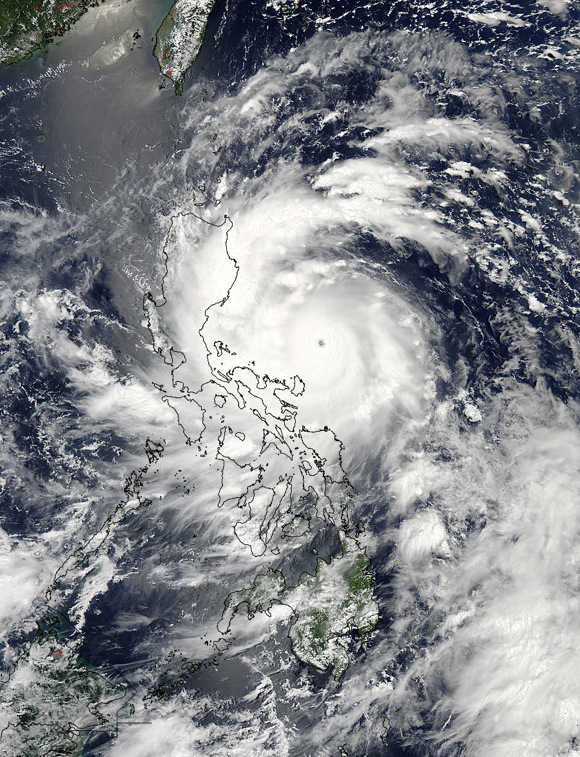 The MODIS instrument on NASA’s Aqua satellite captured this stunning image of Super-typhoon Utor approaching the Philippines on Aug. 11 at 05:15 UTC (1:15 a.m. EDT). The eye of the storm is east of the central Philippines. Image Credit: NASA Goddard MODIS Rapid Response Team

On Sunday, Aug. 11 at 0719 UTC (3:19 a.m. EDT) NASA’s Tropical Rainfall Measuring Mission or TRMM satellite captured rates of heavy rainfall around the storm’s center and western quadrant near 1.4 inches per hour. At that time, Utor’s rainfall had already started spreading over the northern and central Philippines.

NASA’s CloudSat satellite captured a sideways view of Super-Typhoon Utor that sliced through the storm’s center on Aug. 11 just before the system hit the Philippines. Cloudsat revealed large amounts of liquid and ice water were abundant at middle and lower levels of the storm system, which were an indication of the storm’s strength. 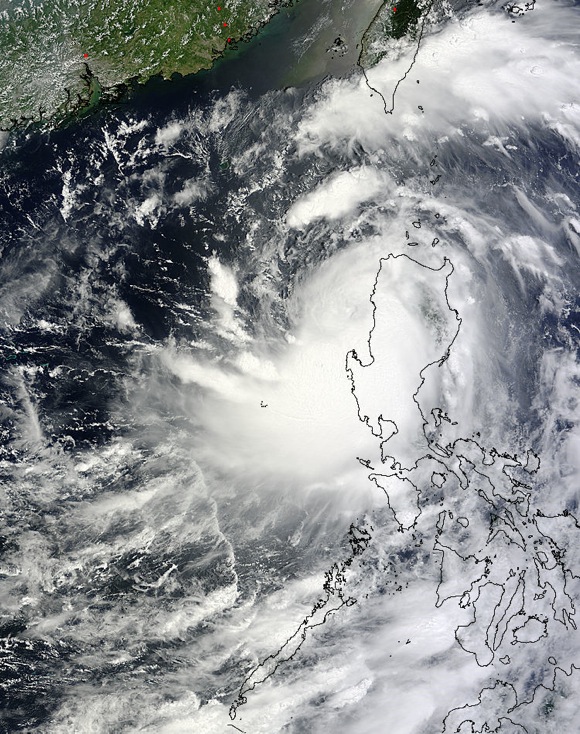 The MODIS instrument on NASA’s Terra satellite captured this image of Typhoon Utor leaving the Philippines on Aug. 12 at 02:55 UTC (10:55 p.m. EDT/Aug. 11) when its center was near the Lingayen Gulf on the country’s western side. Image Credit: NASA Goddard MODIS Rapid Response Team

In less than 13 hours, Super-Typhoon Utor’s center crossed the Philippines and the storm weakened into a typhoon.

NASA’s Terra satellite passed over the then weakened Typhoon Utor on Monday, Aug. 12 at 02:55 UTC (10:55 p.m. EDT/Aug. 11) as it was moving into the South China Sea. Utor had weakened to a typhoon after crossing the land and its center was near the Lingayen Gulf on the country’s western side. Microwave and infrared satellite instrument imagery revealed an eye after Utor emerged over open water.

NASA’s CloudSat satellite captured this sideways slice of clouds and precipitation in Typhoon Utor on Aug. 11 just before the system hit the Philippines. Large amounts of liquid and ice water (deep reds and pink color) are abundant at middle and lower levels of the storm system. Image Credit: NASA/Colorado State

Reuters News Service reported on Aug. 12 that one person died and there were at least 13 people missing. Reuters also noted that the hardest hit town was Casiguran in Aurora province on the Philippines’ east coast. Casiguran is the unofficial capital of the northern part of Aurora and is well-known for its beaches and recreation. Utor caused power outages, agricultural damages and landslides.

After weakening over the Philippines, Utor is expected to re-strengthen in the South China Sea before making a final landfall in southeastern China. Forecasters at the Joint Typhoon Warning Center noted that the current track of the storm takes the center between Hainan Island, China and Hong Kong for a landfall on Aug. 14.