Already strained by water scarcity and political tensions, the arid Middle East along the Tigris and Euphrates rivers is losing critical water reserves at a rapid pace, from Turkey upstream to Syria, Iran and Iraq below.

Unable to conduct measurements on the ground in the politically unstable region, UC Irvine scientists and colleagues used data from space to uncover the extent of the problem. They took measurements from NASA’s Gravity Recovery and Climate Experiment satellites, and found that between 2003 and 2010, the four nations lost 144 cubic kilometers (117 million acre feet) of water – nearly equivalent to all the water in the Dead Sea. The depletion was especially striking after a drought struck the area in 2007. Researchers attribute the bulk of it – about 60 percent – to pumping of water from underground reservoirs. 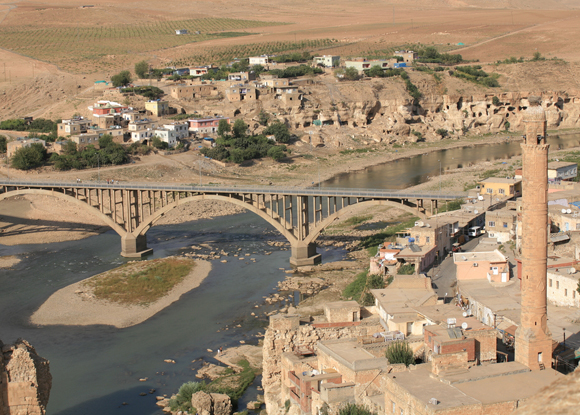 They concluded that the Tigris-Euphrates watershed is drying up at a pace second only to that in India. “This rate is among the largest liquid freshwater losses on the continents,” the scientists report in a paper to be published online Feb. 15 in Water Resources Research, a journal of the American Geophysical Union.

Water management is a complex issue in the Middle East, “a region that is dealing with limited water resources and competing stakeholders,” said Katalyn Voss, lead author and a water policy fellow with the University of California’s Center for Hydrologic Modeling in Irvine.

Turkey has jurisdiction over the Tigris and Euphrates headwaters, as well as the reservoirs and infrastructure of its Southeastern Anatolia Project, which dictates how much water flows downstream into Syria, Iran and Iraq. And due to varied interpretations of international laws, the basin does not have coordinated water management. Turkey’s control of water distribution to adjacent countries has caused tension, such as during the 2007 drought, when it continued to divert water to irrigate its own agricultural land.

“That decline in stream flow put a lot of pressure on downstream neighbors,” Voss said. “Both the United Nations and anecdotal reports from area residents note that once stream flow declined, the northern part of Iraq had to switch to groundwater. In a fragile social, economic and political environment, this did not help.”

The Gravity Recovery and Climate Experiment, which NASA launched in 2002 to measure the Earth’s local gravitation pull from space, is providing a vital picture of global trends in water storage, said hydrologist Jay Famiglietti, the study’s principal investigator and a UC Irvine professor of Earth system science.

GRACE is “like having a giant scale in the sky,” he said. “Whenever you do international work, it’s exceedingly difficult to obtain data from different countries. For political, economic or security reasons, neighbors don’t want each other to know how much water they’re using. In regions like the Middle East, where data are relatively inaccessible, satellite observations are among the few options.”

Rising or falling water reserves alter the Earth’s mass in particular areas, influencing the strength of the local gravitational attraction. By periodically quantifying that gravity, the satellites provide information about how much each region’s water storage changes over time.

The 754,000-square-kilometer (291,000-square-mile) Tigris-Euphrates River Basin jumped out as a hot spot when researchers from UC Irvine, NASA’s Goddard Space Flight Center and the National Center for Atmospheric Research looked at global water trends. Over the seven-year period, they calculated that available water there shrank by an average of 20 cubic kilometers (16 million acre feet) annually.

Meanwhile, the area’s demand for freshwater is rising at the worst possible time. “They just do not have that much water to begin with, and they’re in a part of the world that will be experiencing less rainfall with climate change. Those dry areas are getting drier,” Famiglietti said. “Everyone in the world’s arid regions needs to manage their available water resources as best they can.”