Life-producing phosphorus was carried to Earth by meteorites

New research from a team of scientists now shows that one key element that produced life on Earth was carried here on meteorites.

Scientists may not know for certain whether life exists in outer space, but new research from a team of scientists led by a University of South Florida astrobiologist now shows that one key element that produced life on Earth was carried here on meteorites.

In an article published in the new edition of the Proceedings of the National Academies of Sciences, USF Assistant Professor of Geology Matthew Pasek and researchers from the University of Washington and the Edinburg Centre for Carbon Innovation, revealed new findings that explain how the reactive phosphorus that was an essential component for creating the earliest life forms came to Earth. 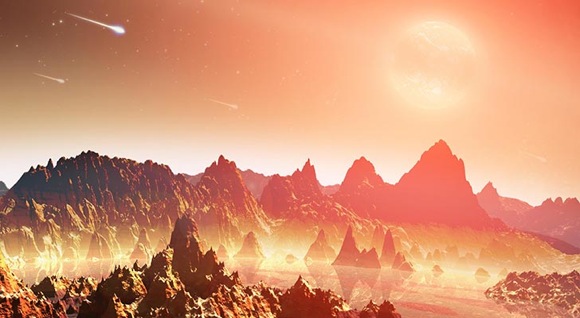 This artist’s conception shows a young, hypothetical planet around a cool star. A soupy mix of potentially life-forming chemicals can be seen pooling around the base of the jagged rocks. Illustration by NASA.

The scientists found that during the Hadean and Archean eons – the first of the four principal eons of the Earth’s earliest history – the heavy bombardment of meteorites provided reactive phosphorus that when released in water could be incorporated into prebiotic molecules. The scientists documented the phosphorus in early Archean limestone, showing it was abundant some 3.5 billion years ago.

The scientists concluded that the meteorites delivered phosphorus in minerals that are not seen on the surface of the Earth, and these minerals corroded in water to release phosphorus in a form seen only on the early Earth.

The discovery answers one of the key questions for scientist trying to unlock the processes that gave rise to early life forms: Why don’t we see new life forms today?

“Meteorite phosphorus may have been a fuel that provided the energy and phosphorus necessary for the onset of life,” said Pasek, who studies the chemical composition of space and how it might have contributed to the origins of life. “If this meteoritic phosphorus is added to simple organic compounds, it can generate phosphorus biomolecules identical to those seen in life today.”

Pasek said the research provides a plausible answer: The conditions under which life arose on the Earth billions of years ago are no longer present today.

“The present research shows that this is indeed the case: Phosphorus chemistry on the early Earth was substantially different billions of years ago than it is today,” he added.

Previous research had showed that before the emergence of modern DNA-RNA-protein life that is known today, the earliest biological forms evolved from RNA alone. What has stumped scientists, however, was understanding how those early RNA–based life forms synthesized environmental phosphorus, which in its current form is relatively insoluble and unreactive.

Meteorites would have provided reactive phosphorus in the form of the iron–nickel phosphide mineral schreibersite, which in water released soluble and reactive phosphite. Phosphite is the salt scientists believe could have been incorporated into prebiotic molecules.

Of all of the samples analyzed, only the oldest, the Coonterunah carbonate samples from the early Archean of Australia, showed the presence of phosphite, Other natural sources of phosphite include lightning strikes, geothermal fluids and possibly microbial activity under extremely anaerobic condition, but no other terrestrial sources of phosphite have been identified and none could have produced the quantities of phosphite needed to be dissolved in early Earth oceans that gave rise to life, the researchers concluded.

The scientists said meteorite phosphite would have been abundant enough to adjust the chemistry of the oceans, with its chemical signature later becoming trapped in marine carbonate where it was preserved.

It is still possible, the researchers noted, that other natural sources of phosphite could be identified, such as in hydrothermal systems. While that might lead to reducing the total meteoric mass necessary to provide enough phosphite, the researchers said more work would need to be done to determine the exact contribution of separate sources to what they are certain was an essential ingredient to early life.

Via University of South Florida