Intelligent civilizations rarer than one in a million

NASA’s Kepler mission has identified 2,740 planets orbiting other stars, but do any of them harbor intelligent life?

Scientists at the University of California, Berkeley, have now used the Green Bank Telescope in West Virginia to look for intelligent radio signals from planets around 86 of these stars. While discovering no telltale signs of life, the researchers calculate that fewer than one in a million stars in the Milky Way Galaxy have planetary civilizations advanced enough to transmit beacons we could detect.

“We didn’t find ET, but we were able to use this statistical sample to, for the first time, put rather explicit limits on the presence of intelligent civilizations transmitting in the radio band where we searched,” said Andrew Siemion, who recently received his Ph.D. in astronomy from UC Berkeley. 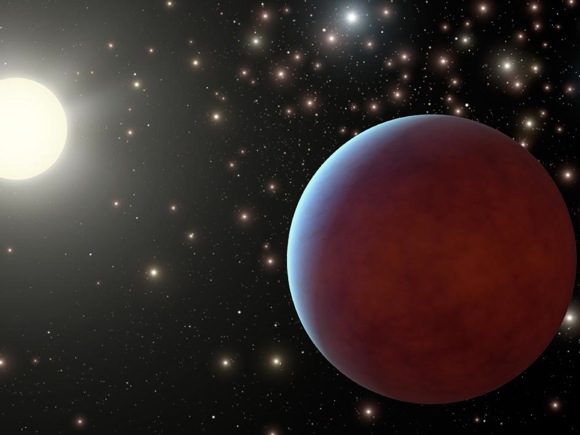 Artist’s concept of gas giant planet in Beehive star cluster. All around, the stars of the Beehive cluster shine brightly in the dark. Make larger. Image Credit: NASA/JPL-Caltech

Even with such odds, there could be millions of advanced civilizations in the galaxy.

“The Kepler mission taught us there are a trillion planets in our Milky Way Galaxy, more planets than there are stars,” said UC Berkeley physicist Dan Werthimer, who heads the world’s longest running SETI (Search for Extraterrestrial Intelligence) project at the Arecibo Telescope in Puerto Rico. “Some day, Earthlings might contact civilizations billions of years ahead of us.”

Siemion, Werthimer and their colleagues published their findings online this week in a paper that has been accepted to The Astrophysical Journal.

The 86 stars were chosen last year based on a list of 1,235 planet candidates known at that time. The scientists chose stars with five or six planet candidates in orbit and those that hosted planets that are thought to have Earth-like conditions, including temperatures that allow liquid water. The telescope spent 12 hours collecting five minutes of radio emissions from each star in a frequency range (1.1 to 1.9 GHz) that on Earth falls between the cellphone and TV bands. They then combed through the data looking for high-intensity signals with a narrow bandwidth (5 Hz) that are only produced artificially — presumably by intelligent life.

Most of the stars were more than 1,000 light-years away, so only signals intentionally aimed in our direction would have been detected. The scientists say that in the future, more sensitive radio telescopes, such as the Square Kilometre Array, should be able to detect much weaker radiation, perhaps even unintentional leakage radiation, from civilizations like our own.

The team plans more observations with the Green Bank Telescope, focusing on multi-planet systems in which two of the planets occasionally align relative to Earth, potentially allowing them to eavesdrop on communications between the planets.

“This work illustrates the power of leveraging our latest understanding of exoplanets in SETI searches,” Werthimer said. “We no longer have to guess about whether we are targeting Earth-like environments, we know it with certainty.”