How to save Europe’s most threatened butterflies

New guidelines on how to save some of Europe’s most threatened butterfly species have been published by a team of scientists co-ordinated by Butterfly Conservation Europe. The report covers 29 threatened species listed on the EU Habitats Directive. Each Member State has a responsibility to conserve these species. The new report will provide crucial information on how to achieve this goal and meet their international biodiversity targets.

The report entitled “Dos and don’ts for butterflies of the Habitats Directive of the European Union” was published in the form of an “Applied Conservation” paper in the newly launched open-access journal Nature Conservation (press release on the journal launch). It includes detailed accounts of each species, their habitat requirements and food-plants, as well as a list of dos and don’ts in the management of their habitats. 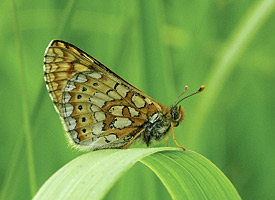 Euphydryas aurinia (Marsh Fritillary ): declining across Europe. The chief threat in lowland grasslands is from overgrazing or cutting. It prefers extensive cattle grazing that creates a tussocky sward in which the main food-plant, Succisa pratensis (Devil’s-bit Scabious) and caterpillars can survive. Image Credit: Chris van Swaay

European butterflies are under huge threat and almost 10% are now threatened with extinction. The European grassland indicator shows that the abundance of 17 characteristic butterflies has declined by over 70% in the last 15 years. The main reasons for the declines are habitat loss and incorrect management. Many habitats are now either abandoned from agriculture, allowing them to become overgrown with scrub, while others are too intensively managed. The new publication is thus a pivotal step to get remaining habitats better managed.

Butterflies are sensitive indicators of the environment and populations respond very quickly to habitat change. Management for butterflies will help ensure the survival of a wide range of other insects, which form the bedrock of European biodiversity. The guidelines will help ensure that European habitats are managed in a sustainable way that helps the survival of humans as well as wildlife. 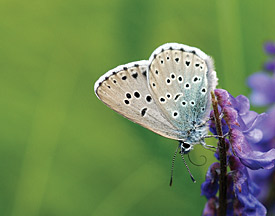 Phengaris arion (Large Blue): a globally endangered species that is declining rapidly in every European country. It needs extensive grazing of its grassland habitat to maintain the correct ant species, which its caterpillars feed on for much of the year. It became extinct in Britain in 1979 but has since been successfully re-introduced following changes habitat restoration and implementation of suitable grazing regimes. Image Credit: Chris van Swaay

The lead author, Chris van Swaay of Dutch Butterfly Conservation said “Managing habitats in the correct way is the single most important issue affecting the survival of European butterflies. This is the first time that practical information has been brought together to address the issue. We hope the advice will be taken up urgently across Europe to help save these beautiful species from extinction.”

Klaus Henle of UFZ (Germany) who established the new journal in collaboration with Lyubomir Penev at Pensoft (Bulgaria) within the European Union’s FP7 project SCALES says “Biodiversity loss is one of the most important topics facing the future of our planet. Our new open access journal Nature Conservation is intended to make scientific information freely available to help conserve nature and create a healthy world for everyone. The journal aims particularly at facilitating better interaction between scientists and practitioners and its major goal is to support synergistic interactions among scientists, policy-makers, and managers.”