If you were standing on Mars, you could see Earth and the moon as two bright evening or morning “stars.” A Mars rover captured this image of Earth in Mars’ sky. 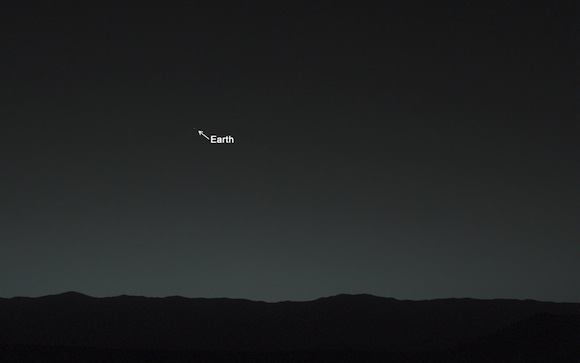 What would Earth look like in Mars’ night sky? It would be somewhat similar to Venus in our sky, not as bright but still a bright morning or evening “star.” As seen from Mars, Earth would be an inner planet. It would always appear near the sun in the sky, either in the west after sunset or in the east before dawn. At those times when Earth passed between the sun and Mars, as it last did in April, 2014, Earth would show phases like a tiny crescent moon.

The Mars Curiosity rover turned its camera toward the horizon – on January 31, 2014 about 80 minutes after sundown – and snapped this photo of Earth shining in the Martian night sky. ‘Shining’ may be strong word for this rover image. Remember, the Mars rovers aren’t designed to capture sky images. .

Curiosity captured this image on the rover’s 529th day, or sol, on the red planet. When Curiosity took this photo, Mars was about 160 million kilometers (99 million miles) from Earth. 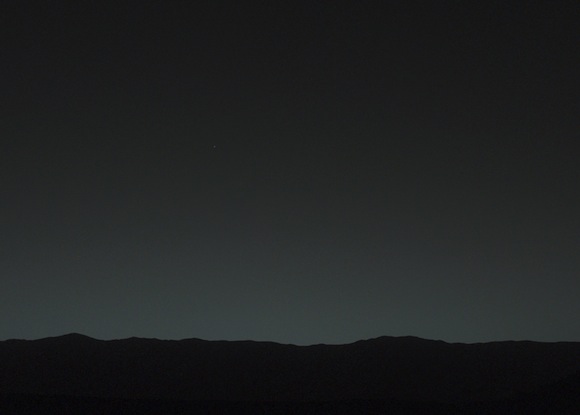 View larger. |In this original image from the Curiosity rover, Earth is a faint white speck, top-center-left, just above the dim glow of twilight near the Martian landscape. Can you see it? We couldn’t. Luckily, NASA supplied an image with a pointer, above. Credit: NASA/JPL-Caltech/MSSS/TAMU

Bottom line: How would Earth look from Mars? Much like Venus in our sky, but not as bright.