Frogs that hear with their mouth

Gardiner’s frogs from the Seychelles islands, one of the smallest frogs in the world, do not possess a middle ear with an eardrum yet can croak themselves, and hear other frogs.

An international team of scientists using X-rays has now solved this mystery and established that these frogs are using their mouth cavity and tissue to transmit sound to their inner ears. The results are published in PNAS on September 2, 2013. 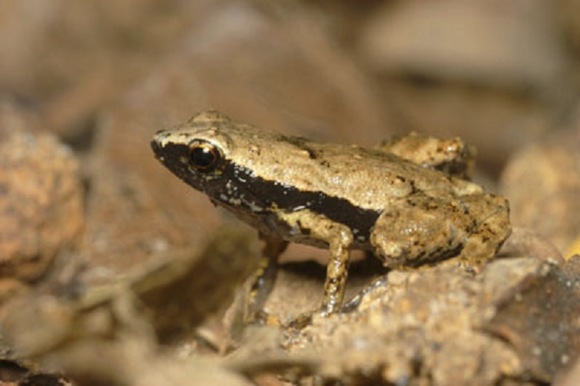 Photo of a male Gardiner’s Frog (S. Gardineri) taken in its natural habitat of the Seychelles Islands. Credit R. Boistel/CNRS

The way sound is heard is common to many lineages of animals and appeared during the Triassic age (200-250 million years ago). Although the auditory systems of the four-legged animals have undergone many changes since, they have in common the middle ear with eardrum and ossicles, which emerged independently in the major lineages. On the other hand, some animals notably most frogs, do not possess an outer ear like humans, but a middle ear with an eardrum located directly on the surface of the head. Incoming sound waves make the eardrum vibrate, and the eardrum delivers these vibrations using the ossicles to the inner ear where hair cells translate them into electric signals sent to the brain. Is it possible to detect sound in the brain without a middle ear? The answer is no because 99.9% of a sound wave reaching an animal is reflected at the surface of its skin.

“However, we know of frog species that croak like other frogs but do not have tympanic middle ears to listen to each other. This seems to be a contradiction,” says Renaud Boistel from the IPHEP of the University of Poitiers and CNRS. “These small animals, known as Gardiner’s frogs, have been living isolated in the rainforest of the Seychelles for 47 to 65 million years, ever since these islands split away from the main continent. If they can hear, their auditory system must be a survivor of life forms on the ancient supercontinent Gondwana.” 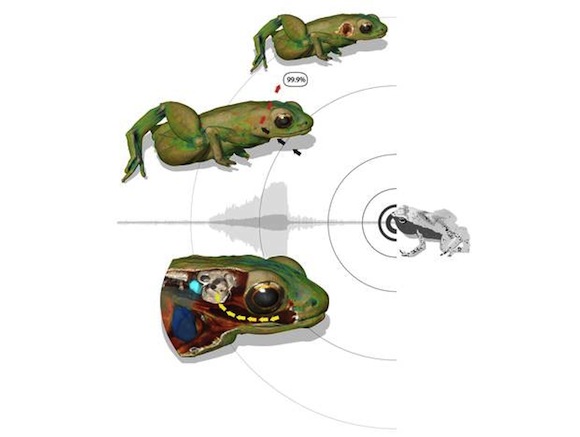 Illustration how a Gardiner’s frog can hear with its mouth: Top left: The skin of the animal reflects 99.9% of an incoming sound wave hitting the body close to the inner ear. Without a middle ear, sound waves cannot be transported to the inner ear. Bottom left: the mouth acts as a resonating cavity for the frequencies of the frogs’ song, amplifying the amplitude of the sound in the mouth. The body tissue between the buccal cavity and the inner ear is adapted to transport these sound waves to the inner ear. Credit R. Boistel/CNRS

To establish whether these frogs actually use sound to communicate with each other, the scientists set up loudspeakers in their natural habitat and broadcast pre-recorded frog songs. This caused males present in the rainforest to answer, proving that they were able to hear the sound from the loudspeakers. Click on the image below to hear the frog croak.

The next step was to identify the mechanism by which these seemingly deaf frogs were able to hear sound. Various mechanisms have been proposed: an extra-tympanic pathway through the lungs, muscles which in frogs connect the pectoral girdle to the region of the inner ear, or bone conduction. “Whether body tissue will transport sound or not depends on its biomechanical properties. With X-ray imaging techniques here at the ESRF, we could establish that neither the pulmonary system nor the muscles of these frogs contribute significantly to the transmission of sound to the inner ears”, says Peter Cloetens, a scientist at the ESRF who took part in the study. “As these animals are tiny, just one centimetre long, we needed X-ray images of the soft tissue and the bony parts with micrometric resolution to determine which body parts contribute to sound propagation.”

Numerical simulations helped to investigate the third hypothesis: that the sound was received through the frog’s head. These simulations confirmed that the mouth acts as a resonator, or amplifier, for the frequencies emitted by this species. Synchrotron X-ray imaging on different species showed that the transmission of the sound from the oral cavity to the inner ear has been optimized by two evolutionary adaptations: a reduced thickness of the tissue between the mouth and the inner ear and a smaller number of tissue layers between the mouth and the inner ear. “The combination of a mouth cavity and bone conduction allows Gardiner’s frogs to perceive sound effectively without use of a tympanic middle ear”, concludes Renaud Boistel.