Tornadoes are notoriously difficult to forecast, with often deadly results: In 2011, tornadoes in the U.S. killed more than 550 people, a higher death toll than in the past 10 years combined.

Now a new study of short-term climate trends offers a new approach to tornado forecasting that may give people in tornado-prone regions as much as a month of forewarning that twisters may soon be descending. 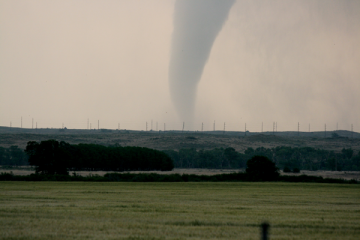 Tornadoes like this one over Kansas are notoriously difficult to forecast due to their volatile nature and short duration. Image Credit: Sean Waugh NOAA/NSSL

Tornadoes are born when warm, moist air collides with cold, dry air, creating a vortex as the two masses move around each other. In the Midwest, where cold air blowing east from the Rockies hits warm air blowing north from the Gulf of Mexico, hundreds of twisters may touch down each year, earning the region the name Tornado Alley.

There are currently no general regional or seasonal tornado trends outlooks, like NOAA issues for Atlantic hurricanes each May, says Michael Tippett, a climate scientist at Columbia University and lead author of the new study in Geophysical Research Letters. “That’s what we’re trying to do for tornadoes.”

By sorting through average atmospheric conditions in tornado-prone regions across the United States over the past 30 years, Tippett and colleagues set out to define a set of parameters that seemed closely associated with increased tornado activity. “The two main ingredients for making tornadoes are wind shear — winds going in different directions at different levels — and rain associated with strong updrafts.”

Plugging in wind shear and updraft data from the past 30 years, the team first tested their model to see if it could back-predict tornado activity for the entire U.S. in individual months. “We found the model was quite good at that,” Tippett says. 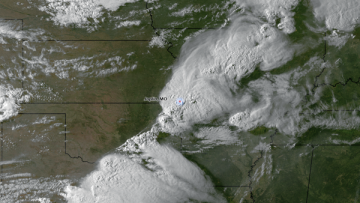 Satellite imagery shows a thunderstorm just minutes before it spawned a large tornado over Joplin, Missouri that killed 161 people and destroyed much of the town in May 2011. Image Credit: NOAA

Then they plugged their parameters into NOAA’s Climate Forecast System to try to see if values from the previous month could be used to predict tornado activity in the following month. The model correlated well with the observed number of tornadoes during the spring and summer, especially in the month of June, but was less reliable in September and October. Historically, May is the busiest tornado month, followed by June.

“This is an interesting approach,” says Ashton Robinson Cook, a meteorologist at NOAA’s Storm Prediction Center based in Norman, Okla., who was not involved in the new study. “As with most models, it’s not perfect, but they’ve done a nice job of balancing the imperfections in the model and taking them into account.”

As to why the models work best in the month of June and worst in September and October, Tippett’s team is unsure. “The character of tornadoes changes depending on the time of year, but we don’t really know how or why.”

The difference may have something to do with the changes in seasons, which brings on different atmospheric conditions, such as varying humidity levels. “In the spring and summer, thunderstorms feed off of moisture and humidity in the low levels of the atmosphere and in the winter, tornado outbreaks tend to be more dependent on larger-scale systems,” Cook says.

Eventually, the team hopes to refine the model so that it might be used to calculate tornado threats for specific areas of the country. “Most of the validation we’ve done so far has been for the entire U.S., so that’s part of the next step: How accurate is the index if we look at specific regions?”

The U.S. Navy helped with cleanup in Joplin, MisSatellite imagery shows a thunderstorm just minutes before it spawned a large tornado over Joplin, Missouri that killed 161 people and destroyed much of the town in May 2011. Iamge Credit: NOAAsouri after a May 2011 tornado. Image Credit: U.S. Navy photo by Lt. j.g. Ryan Sullivan/Released

For now, Tippett’s team is pushing for the model to be used this summer to predict whether this will be an active storm season, like last year’s. “Based on what we’ve done so far, the argument for using the model for at least June is quite good,” he says.

Having a month’s notice that tornado activity might be high in a certain region would help emergency relief agencies as well as individuals and communities prepare.

“After last year’s deadly tornado season,” Tippett says, “we’ll take every glimpse into the future that we can get.”

The trouble with tornado tracking

Tornadoes and hurricanes may have swirling destruction in common, but when it comes to forecasting, the storms could not be more different. Due to their large size and longevity, hurricanes can be tracked for weeks in advance. Tornadoes, on the other hand, are relatively small and short-lived. Even with today’s advanced tracking technology, communities in a twister’s path often only get a few minutes’ warning.

The problem with tracking tornadoes doesn’t necessarily lie in storm detection. Doppler radar and satellites have greatly improved since the days when tornado alerts relied on eyewitness accounts. But challenges arise in creating and running computer programs to model how storms might form and evolve over time.

At NOAA’s National Severe Storms Lab (NSSL) in Norman, Okla., which focuses on tornadoes, hail and high winds, the computation problems break down into issues with size, scale and speed.

Studying the storms that give rise to tornadoes requires extremely high-resolution observational data, which is then plugged into weather models that often can’t quite grasp the strange physics of highly volatile storm systems, says Ashton Robinson Cook, a meteorologist at NOAA’s Storm Prediction Center, also based in Norman, Okla.

At the fine scales needed for accurate weather prediction, these models can only be run on the fastest supercomputers. But that still takes time. While all that computing is going on, a storm may be rapidly evolving into something dangerous; with existing technology, the average time to detect, track and release warnings on a developing storm system or tornado is 14 minutes.

Researchers at the NSSL are hoping to increase that lead time to as much as an hour, Cook says, by looking beyond supercomputers to systems based on graphical processing units, which would greatly increase the efficiency and computing power.

Other goals, Cook says, include increasing the number and resolution of weather radar stations around the country (right now, 70 percent of the U.S. has inadequate radar coverage) and continuing to improve scientists’ knowledge about the physics of how storms form and evolve into deadly and destructive tornadoes.