NASA’s Mars rover Curiosity offers armchair explorers the next best thing to being there. 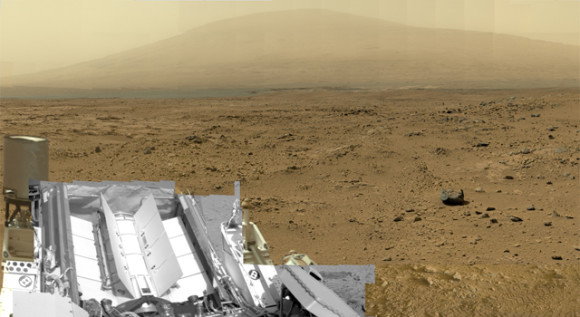 This is a reduced version of panorama from NASA’s Mars rover Curiosity with 1.3 billion pixels in the full-resolution version. It shows Curiosity at the “Rocknest” site where the rover scooped up samples of windblown dust and sand. Curiosity used three cameras to take the component images on several different days between Oct. 5 and Nov. 16, 2012. Click here to explore this image with pan and zoom controls.. Image credit: NASA/JPL-Caltech/MSSS

The first NASA-produced view from the surface of Mars larger than one billion pixels stitches together nearly 900 exposures taken by cameras onboard Curiosity and shows details of the landscape along the rover’s route.

The 1.3-billion-pixel image is available for perusal with pan and zoom tools by clicking here.

The full-circle scene surrounds the site where Curiosity collected its first scoops of dusty sand at a windblown patch called “Rocknest,” and extends to Mount Sharp on the horizon.

“It gives a sense of place and really shows off the cameras’ capabilities,” said Bob Deen of the Multi-Mission Image Processing Laboratory at NASA’s Jet Propulsion Laboratory, Pasadena, Calif. “You can see the context and also zoom in to see very fine details.”

Deen assembled the product using 850 frames from the telephoto camera of Curiosity’s Mast Camera instrument, supplemented with 21 frames from the Mastcam’s wider-angle camera and 25 black-and-white frames — mostly of the rover itself — from the Navigation Camera. The images were taken on several different Mars days between Oct. 5 and Nov. 16, 2012. Raw single-frame images received from Curiosity are promptly posted on a public website. Mars fans worldwide have used those images to assemble mosaic views, including at least one gigapixel scene.

The new mosaic from NASA shows illumination effects from variations in the time of day for pieces of the mosaic. It also shows variations in the clarity of the atmosphere due to variable dustiness during the month while the images were acquired.

NASA’s Mars Science Laboratory project is using Curiosity and the rover’s 10 science instruments to investigate the environmental history within Gale Crater, a location where the project has found that conditions were long ago favorable for microbial life.

Malin Space Science Systems, San Diego, built and operates Curiosity’s Mastcam. JPL, a division of the California Institute of Technology in Pasadena, manages the project for NASA’s Science Mission Directorate in Washington and built the Navigation Camera and the rover.