United Nations demographers declared a day last week (July 11, 2013) as World Population Day, at the same time saying that our global human population has now reached 7.2 billion and counting. The 7.2 billion number appears in the most recent of the biannual reports from the UN Population Division called World Population Prospects, which you can find here. This report also gave current projections for future population:

According to the 2012 Revision of the official United Nations population estimates and projections, the world population of 7.2 billion in mid-2013 is projected to increase by almost one billion people within the next twelve years, reaching 8.1 billion in 2025, and to further increase to 9.6 billion in 2050 … 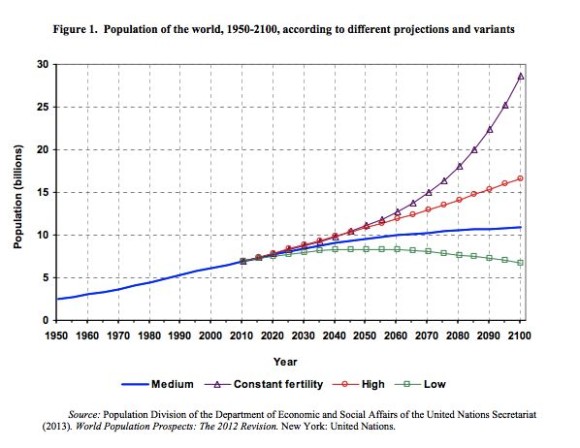 If you’ve been paying attention to such things, you know this new UN projection for population in 2050 is higher than it used to be by some 700 million people. That is, in 2000, the UN was saying 8.9 billion people by 2050. This is the UN’s “medium-variant” or “best guess” scenario, by the way. As you can see on the chart above, the UN also projects a high and low variant for future population. Other organizations have slightly different projections for population by 2050. In a good article on population in National Geographic last week, Jaclyn Skurie wrote:

The United States Census Bureau projects a population of 9.4 billion. The Population Reference Bureau, a nongovernmental group that tracks U.S. demographics, has increased its projection by two million since their last estimates were published in 2010; their number now matches the UN estimate.

According to the Worldwatch Institute, which released an analysis of the UN’s new population projections this week, the reason for the increase is due in part to:

… unexpectedly high fertility in a number of developing countries.

Fertility, in this context, means birthrate. Population experts define fertility as “the ratio of live births in an area to the population of that area; expressed per 1000 population per year.” Fertility is one of three key population drivers (death and migration are the other two). It’s easy to see that the rate of future fertility in various parts of the world cannot be predicted precisely but that future population will rise and fall as the fertility rate rises and falls. The new UN report says:

What has happened over the past decade is that fertility in some developing countries has been higher than the medium-variant projection being used in the year 2000. That’s why the new projection for 2050 is higher.

All of these numbers are based on trends that are evolving and imprecisely known. Overall, though, it’s possible to say that the trend in human population continues to be upward, and those who say that population growth will end “on its own” sometime in the second half of the 21st century now appear less likely to be correct.

Bottom line: July 11, 2013 was declared as World Population Day by the United Nations, which also said last week that our global human population has reached 7.2 billion. The medium-fertility population scenario for 2050 has been revised upward from the year 2000, from 8.9 billion by 2050 to 9.6 billion.

How many people have ever lived on Earth?

Thank you! Your submission has been received!
Oops! Something went wrong while submitting the form.
END_OF_DOCUMENT_TOKEN_TO_BE_REPLACED