Today in science: Discovery of Neptune

Neptune is the planet discovered with mathematics. 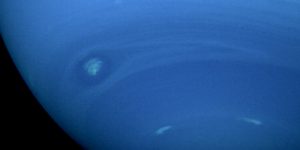 The only spacecraft yet to visit Neptune was Voyager 2 in 1989. Image via NASA.

September 23, 1846. The planet Neptune – now considered by most astronomers to be the outermost major planet in our solar system – was discovered on this date, using mathematics. Johann Gottfried Galle, Urbain Jean Joseph Le Verrier, and John Couch Adams all worked independently to help discover this world in 1846. Their separate work to find Neptune led to an international dispute as to whom attribute the discovery of the farthest planet of our solar system.

Neptune cannot be seen without a telescope. Its discovery didn’t come solely through the use of a telescope, though. It came from astronomers’ analysis of data related to Uranus’ orbit. Astronomer noticed discrepancies in Uranus’ observed position in contrast to its predicted position; the planet was not quite where it was mathematically predicted to be.

Many popular notions of the time attempted to explain Uranus’ deviation from its predicted orbit. One thought was that perhaps Newton’s law of universal gravitation ceased to work or worked differently at such great distances from our sun. Assuming that gravity works the same throughout space (and, today, gravity is considered constant and one of our universe’s four fundamental forces), what could be causing the discrepancies in Uranus’ orbit?

Order and sizes of the 8 major planets of our solar system – Mercury, Venus, Earth, Mars, Jupiter, Saturn, Uranus and Neptune – via theplanets.org 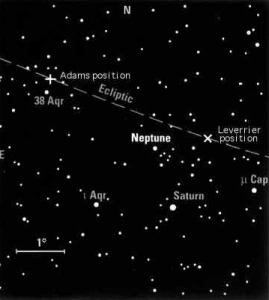 Predicted vs. actual position of Neptune via University of St-Andrews.

The problem with the orbit of Uranus caused astronomers to begin speaking of another possible planet beyond it. The French astronomer Urbain Le Verrier began using mathematics to try to locate mystery planet’s position in June 1845. The British John Couch Adams was also working on this problem. Neither knew of the other’s calculations.

On September 23, 1846, Galle used Le Verrier’s calculations to find Neptune only 1° off Le Verrier’s predicted position. The planet was then located 12° off Adams’ prediction.

After Neptune’s discovery, an international dispute arose concerning who was the ‘real’ discoverer of the new planet, Le Verrier or Adams. This conflict was amplified by existing political tensions between France and Great Britain. Today, both men – and Galle, who was the first to knowingly see the new planet through a telescope – are credited with the discovery.

Ironically, as it turns out, both Le Verrier and Adams had been very lucky. Their predictions indicated Neptune’s distance correctly around 1840-1850. Had they made their calculations at another time, both predicted positions would have been off. Their calculations would have predicted the planet’s position only 165 years later or earlier, since Neptune takes 165 years to orbit once around the sun.

By the way, Neptune might have been discovered without the aid of mathematics. Like all planets in our solar system – because it’s closer to us than the stars – it can be seen from Earth to move apart from the star background. For example, the great astronomer Galileo, using one of the first telescopes, is said to have recorded Neptune as a faint star in 1612. If it had watched it over several weeks, he’d have noticed its unusual motion.

Read about the discoveries of Neptune and Pluto 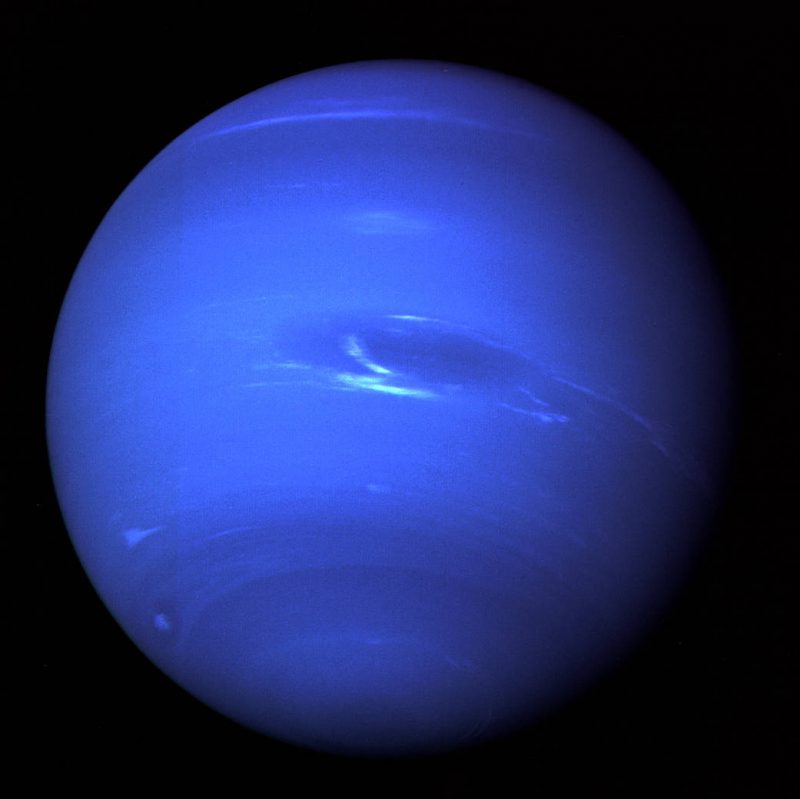 Another Voyager 2 image of Neptune, acquired on August 20, 1989 at a range of 4.4 million miles (7 million km) from the planet, four days before Voyager’s closest point to Neptune. You can see Neptune’s Great Dark Spot and its companion bright smudge. On the west limb, a fast-moving bright feature called Scooter by astronomers is visible, with another little dark spot. These clouds were seen to persist for as long as Voyager’s cameras could resolve them. Image via NASA.