Check out one of the world’s most famous early photos. It shows the Wright brothers and the 1st true airplane on December 17, 1903. 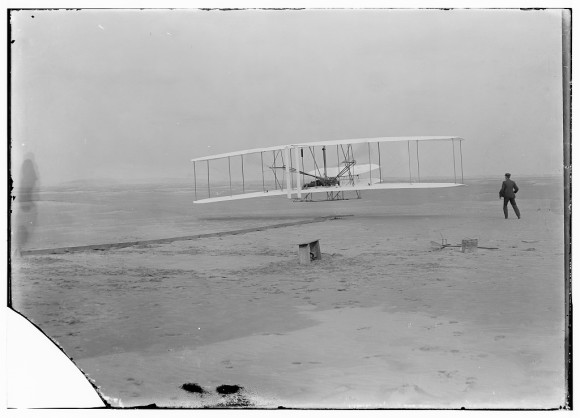 One of the world’s most famous early photographs serves to commemorate the Wright brothers’ airplane on its 1st powered flight on December 17, 1903. Via Library of Congress.

December 17, 1903. On this date, two Ohio brothers – Wilbur and Orville Wright – made the first bonafide, manned, controlled, heavier-than-air flight. It was the first airplane, and it took off at 10:35 a.m. with Orville Wright on board as pilot. He flew their vehicle, called the Flyer, for 12 seconds over 120 feet (about 37 meters) of sandy ground just outside Kitty Hawk, North Carolina.

Two years later, the Wrights wrote in a patent application that their airplane design:

… provide[s] means for guiding the machine both vertically and horizontally … combining lightness, strength, convenience of construction, and certain other advantages. 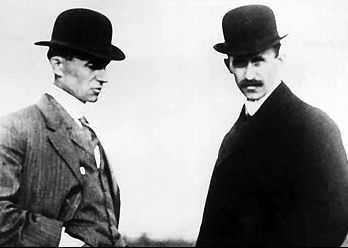 Wilbur and Orville Wright. Wilbur (l) was about four years older, born in 1867.

Were the Wright brothers destined for the skies? It’s known that their father gave them a rubber-band-powered flying toy when they were still children. The toy was made of cork and bamboo, with a paper body.

By 1899 – when Wilbur was 33 years old and Orville was 28 – the brothers were already learning everything they could about the science of aeronautics and the history of attempted human flight. Their first airplane were gliders, which they tested on the long, isolated beaches of Kitty Hawk. By 1902, they had built a glider that could be manned and controlled by a human pilot. It held a world record for gliding over 600 feet (nearly 200 meters).

Their first powered aircraft had a 40-foot (12-meter) wingspan, weighed 750 lbs, and had a 12-horsepower engine.

That first flight in December 1903 marked the beginning of a new era of global travel and relatedness.

By the way, at the time they received their patent for their airplane in 1906, several other aviators of the day claimed to have been the first to use the Wrights’ method of turning the airplane by warping or twisting the wings. But this part of the design, too, was included in the Wrights’ patent. In 2013, a story came to light about another would-be aviator, Gustave Whitehead, whose first flight supposedly beat the Wright brothers by two years. Thus far, that story has not been supported and is not accepted by aviation scholars.

Bottom line: The first airplane soared for 12 seconds over 120 feet (about 37 meters) of sandy ground just outside Kitty Hawk, North Carolina on December 17, 1903.