Roboticists are fundamentally rethinking their craft. Particle robots don’t look like biological creatures, but they’re constructed like biological systems, vast in complexity and abilities, yet composed of simple parts. Are they a step toward the proverbial ‘gray goo’?

When you think of robots, the first things that might come to mind are androids, like the ones in science fiction movies and TV shows such as “Star Wars” or “The Orville“. Or perhaps you envision industrial robots that build cars on assembly lines. Both of these sorts of real and sci-fi robots consist of many complex parts. They’re usually designed for a specific purpose.

Now, researchers at MIT, Columbia University, Cornell University and Harvard University say they’re trying to rethink robotics, in a fundamental way. Toward that end, they’ve developed a new type of robotic system – particle robots – inspired by the behaviors of biological cells. Is the development of particle robots a step towards futuristic gray goo, that is, robots comprised of billions of nanoparticles? Maybe. The researchers say they have in mind robots that could explore new terrains, or clean up polluted areas. They announced their new concept on March 20, 2019. The associated peer-reviewed paper was published in the journal Nature on the same day.

As the name suggests, these robots are composed of “particles” – individual and identical disc-shaped units, loosely connected by magnets around their perimeters. The particles can only expand and contract; that doesn’t sound sound like much, but when their motions are carefully timed, they push and pull on each other in a coordinated, smooth movement.

They can even navigate toward sources of light. As explained by Daniela Rus, director of the Computer Science and Artificial Intelligence Laboratory (CSAIL) and the Andrew and Erna Viterbi Professor of Electrical Engineering and Computer Science at MIT:

We have small robot cells that are not so capable as individuals but can accomplish a lot as a group. The robot by itself is static, but when it connects with other robot particles, all of a sudden the robot collective can explore the world and control more complex actions. With these ‘universal cells,’ the robot particles can achieve different shapes, global transformation, global motion, global behavior, and, as we have shown in our experiments, follow gradients of light. This is very powerful.

Although the particles act as one unit, they do not communicate directly with each other, so particles can be removed or added as needed. Even if multiple particles malfunction, they can still complete tasks. They are also very flexible, being able to navigate around obstacles and squeeze through tight gaps. According to the researchers, these types of robots could enable more scalable, flexible and robust systems.

So just how do these particles work and interact with each other?

Since the particles are discs, they can rotate around each other – kind of like gears – as well as connect and disconnect, forming many different configurations. They are programmed to contract and expand in an exact sequence – this pushes and pulls the entire assembly of particles toward a light source. The particles have algorithms that analyze broadcasted information about the light intensity from every other particle, without the need for direct particle-to-particle communication. 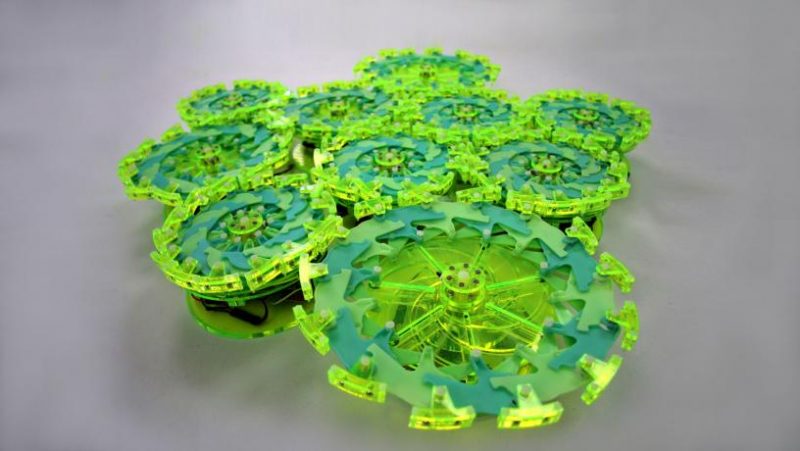 Another view of discs in a particle robot. Image via Columbia Engineering. 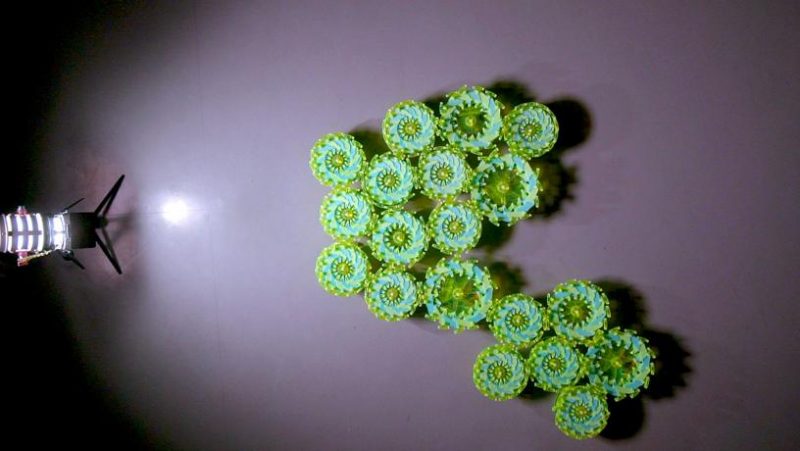 Particle robots can use the combined motions of the particles to move toward a light source as one unit. Image via Columbia Engineering.

Every particle detects the intensity of light from a light source and the signal it broadcasts shares that calculated intensity with every other particle. As might be expected, the closer a particle is to the light source, the stronger the intensity. Particle that detect the highest light intensity will expand first. Then, in order, the next particles will expand as the first particles start to contract again. Precise timing from a shared synchronized clock among the particles is essential. Shuguang Li, a CSAIL postdoc at MIT, explained it this way:

This creates a mechanical expansion-contraction wave, a coordinated pushing and dragging motion, that moves a big cluster toward or away from environmental stimuli. If you mess up the synchronized clock, the system will work less efficiently.

The results can be extraordinary – even simulated clusters of up to 10,000 particles maintained their movement, at half their speed, when up to 20 percent of the particles failed. According to Hod Lipson at Columbia Engineering:

It’s a bit like the proverbial ‘gray goo.’ The key novelty here is that you have a new kind of robot that has no centralized control, no single point of failure, no fixed shape, and its components have no unique identity. 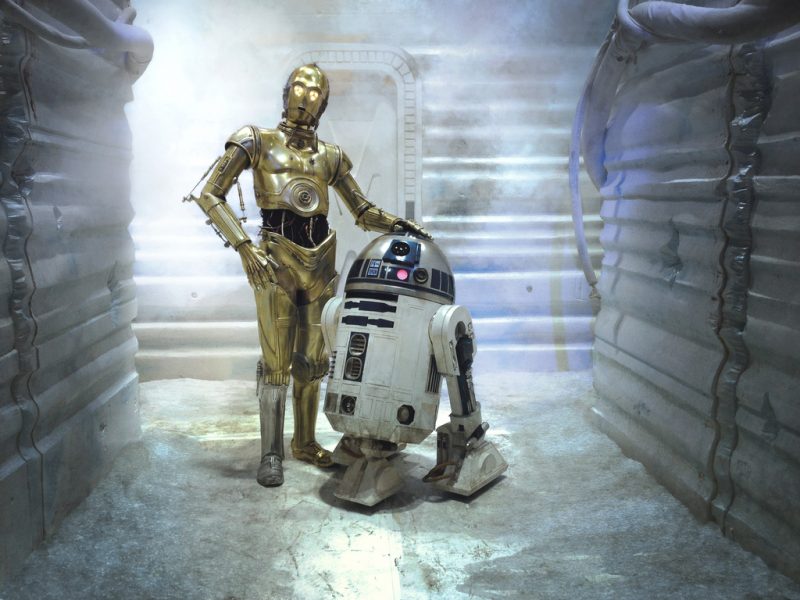 When most people think of robots, ones like C-3PO and R2-D2 from Star Wars might come to mind. Image via Gordon Tarpley, CC BY-SA.

The future of this new robotic technology is even more amazing – robots composed of millions of such particles, all working together in unison. As noted by Lipson:

We think it will be possible one day to make these kinds of robots from millions of tiny particles, like microbeads that respond to sound or light or chemical gradient. Such robots could be used to do things like clean up areas or explore unknown terrains/structures.

We’ve been trying to fundamentally rethink our approach to robotics, to discover if there is a way to make robots differently. Not just make a robot look like a biological creature but actually construct it like a biological system, to create something that is vast in complexity and abilities yet composed of fundamentally simple parts. 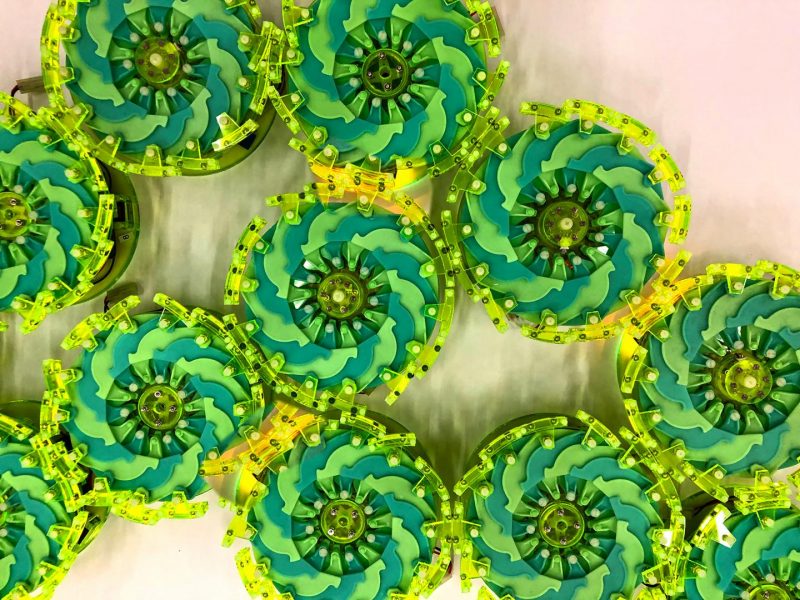 These disc-shaped particles cluster together to form a “particle robot” that can move toward light and carry other objects. Image via Felice Frankel/MIT.

Bottom line: Roboticists have been rethinking the way they build robots. Particle robots don’t look like biological creatures, but they’re constructed like biological systems, vast in complexity and abilities, yet composed of fundamentally simple parts. Are particle robots a step toward the proverbial ‘gray goo’?