The newly found bones were close to the site of the famous ‘flower burial’ in Shanidar Cave, which overturned notions of Neanderthals as brutish subhumans and suggested they buried their dead. 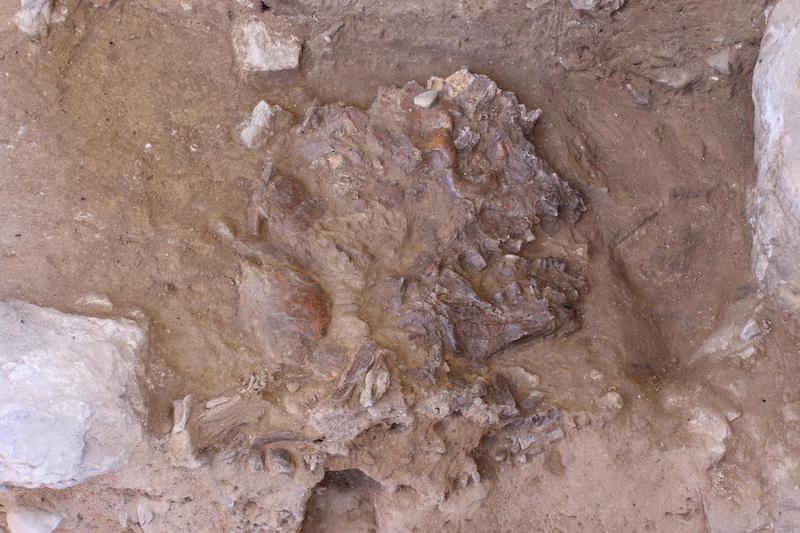 Can you see the flattened skull and neck bones in this rock? They are part of an incomplete Neanderthal skeleton – called Shanidar Z by scientists – newly discovered in famous Shanidar Cave. Shanidar Z’s skull is thought to have been flattened by the weight of overlying sediment. Image via Graeme Barker/ Eurekalert.

One of the most significant archaeological sites of the 20th century is Shanidar Cave in Iraqi Kurdistan. At this site, over 60 years ago, scientists unearthed the bones of 10 Neanderthal individuals. It was a discovery that changed the way we look at this extinct hominid species. The Neanderthal individuals found at Shanidar Cave are thought to have died about 70,000 years ago and to have been deliberately buried there. Now archaeologists have discovered new, partial skeletal remains of an additional Neanderthal individual at Shanidar Cave. The first new bone, a rib, was unearthed in 2016, followed by a lumbar vertebrate and a right hand that was still clenched after thousands of years. In 2018 and 2019, more bones were extracted from the ground. A skull, flattened by the weight of sediment above it, was carefully removed. Beneath the head was a left hand. They also found upper body bones, down to the waist.

These findings were reported in the February 2020 issue of the journal Antiquity.

Emma Pomeroy of Cambridge University is the paper’s lead author. In a statement published at EurekAlert.org, she said:

So much research on how Neanderthals treated their dead has to involve returning to finds from 60 or even 100 years ago, when archaeological techniques were more limited. And that only ever gets you so far.

To have primary evidence of such quality from this famous Neanderthal site will allow us to use modern technologies to explore everything from ancient DNA to long-held questions about Neanderthal ways of death, and whether they were similar to our own. 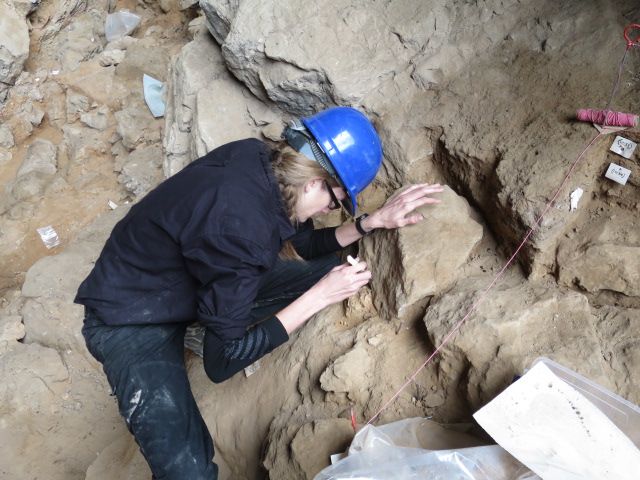 The original Shanidar Cave Neanderthals – recovered between 1951 and 1960 by a team led by Ralph Solecki – challenged conventional ideas of Neanderthals as primitive brutish subhumans. One of the Neanderthals showed signs of disabling injuries, indicating that others had cared for him. Another showed a rib puncture wound, suggesting he met a violent end. And in the sediment around one individual, researchers found clumps of pollen, leading to speculation of a burial adorned with flowers.

In 2011, Graeme Barker, also of Cambridge University, was invited by the Kurdistan Regional Government to conduct further excavations at Shanidar Cave. The original plan was to collect soil samples at the spot where the original bones were found and use the latest analysis techniques, not available 60 years ago, to figure out the age of the remains, as well as the climate and ecology of the Shanidar Neanderthals’ world. 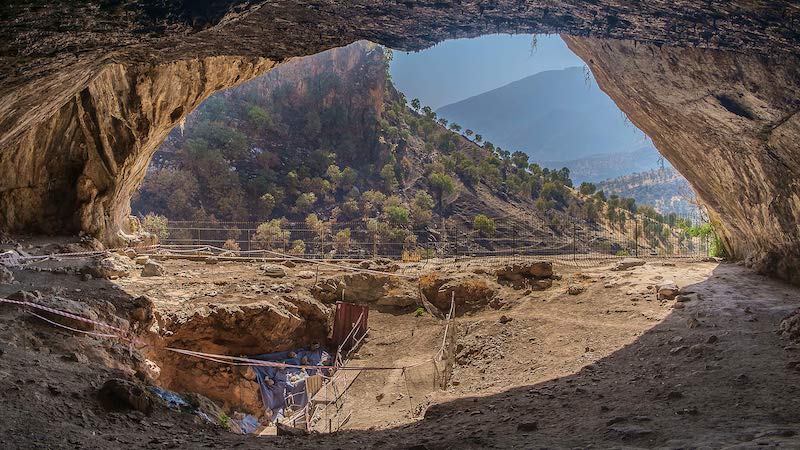 Work that began in 2014 had to be suspended because of nearby ISIS activity, but the archaeologists were able to safely resume excavations in 2015. Barker said:

We thought with luck we’d be able to find the locations where they had found Neanderthals in the 1950s, to see if we could date the surrounding sediments. We didn’t expect to find any Neanderthal bones. 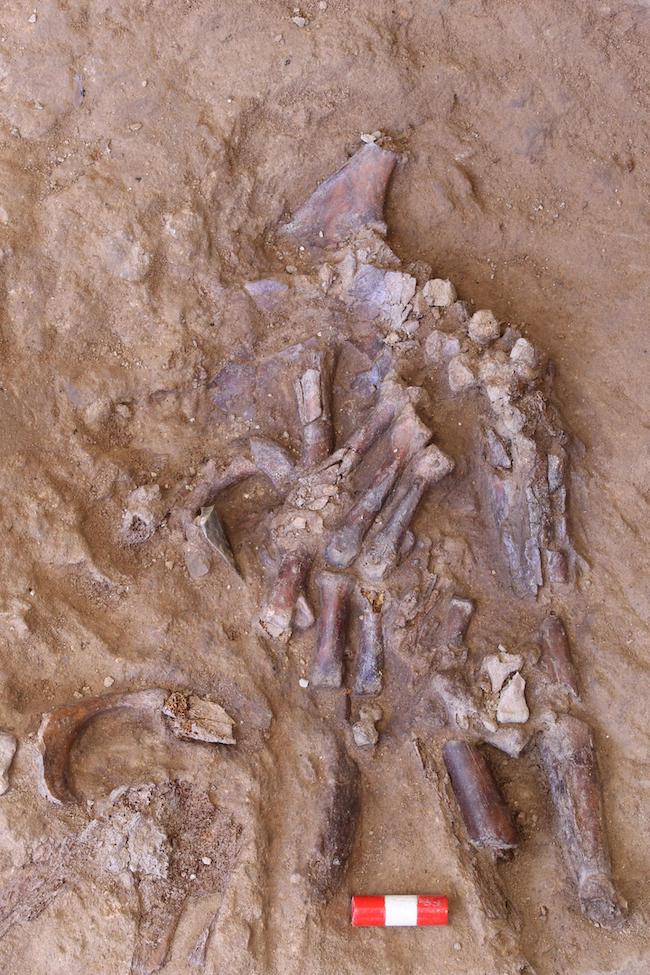 Pomeroy described the newly found bones as “heartbreakingly soft,” while Baker said they had the consistency of a wet biscuit. The archaeologists worked painstakingly to scrape away sediment around the bone, sometimes using bamboo kebab sticks. Before sections containing bone were removed and wrapped in foil, the bone was brushed with a glue-like consolidant to harden it. In an article by the University of Cambridge, Baker said:

Emma’s got an eye for where the various protuberances of bone are likely to be. It took her weeks of intense concentration working in what is pretty much a sauna in terms of heat and humidity. 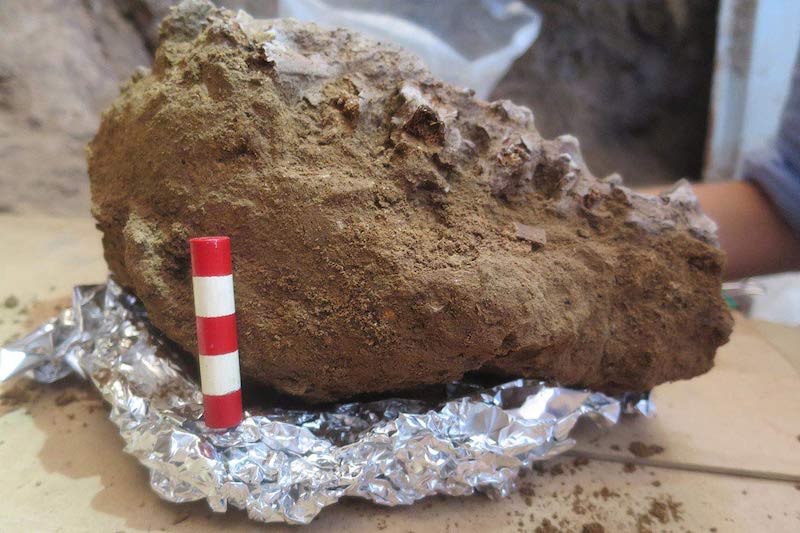 Shanidar Z’s spinal column in a block of sediment, right after it was removed from the ground. Image via Cambridge University.

Researchers have not yet been able to determine the sex of this individual. The condition of its teeth suggest a middle- or older-aged adult. And since the scientists are not yet sure if this is a completely new individual, or the missing parts of an incomplete skeleton collected by Solecki’s team over 60 years ago, they called these remains Shanidar Z.

An intriguing question, posed when the Shanidar Cave Neanderthals were first discovered: was the cave a burial site? Speculation about Neanderthals laying flowers on graves, based on the presence of pollen clumps in the sediment, is still controversial. But the researchers now think there is compelling evidence that Shanidar Cave was used to inter the dead. That some bones were found articulated – still attached – suggests bodies were not left in the open where scavengers could get to them. Baker also commented on supporting evidence seen in the site’s geological features:

The new excavation suggests that some of these bodies were laid in a channel in the cave floor created by water, which had then been intentionally dug to make it deeper. There is strong early evidence that Shanidar Z was deliberately buried. 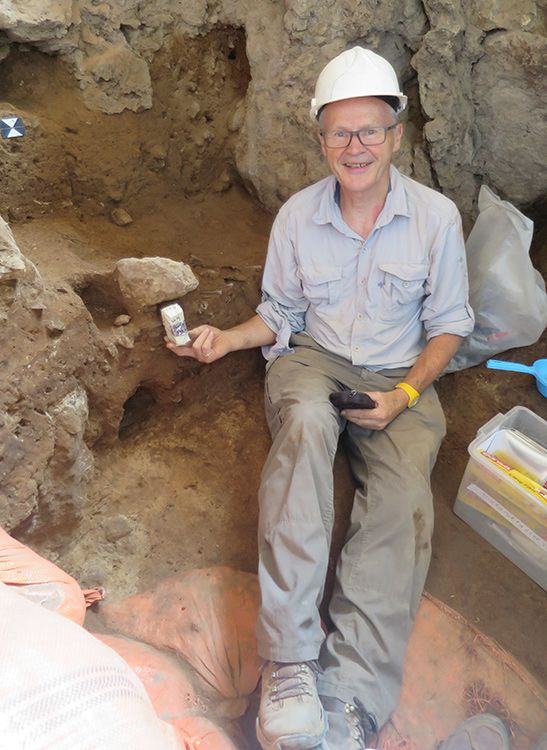 Bones uncovered by Solecki in the 1950s were found in different layers. And during the new excavation, the archaeologists found a rock that may have served as a marker for the burial site. Pomeroy said:

We have Neanderthals at different levels, as well as this cluster of bodies next to a very large rock, perhaps some kind of marker. Not only are they returning to the same cave, but they appear to be putting bodies in the same spot.

While it’s common across human cultures to have places in the landscape earmarked for the dead, maybe we are seeing traces of this behavior in a different species. 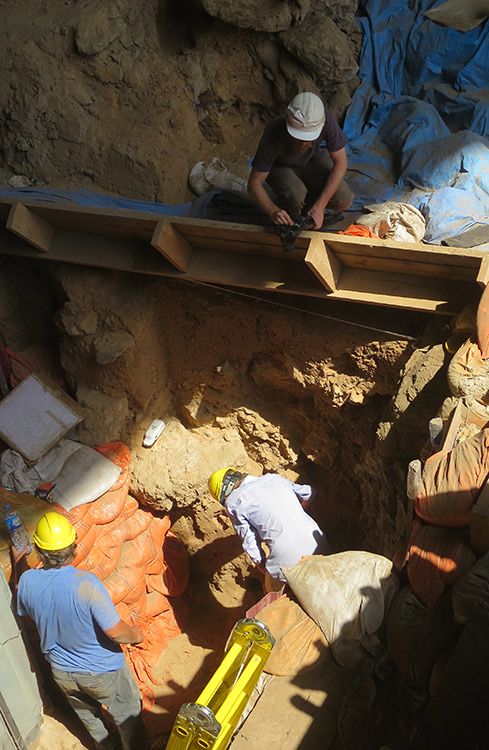 Archaeologists working at the site in Shanidar Cave where Neanderthals were found in the mid-20th century by Ralph Solecki. Image via Cambridge University.

In recent decades, scientists have learned that Neanderthals and humans once interbred. Much of this evidence comes from DNA found in Neanderthal remains from northern sites, where colder climates helped preserve DNA. Little is known about Neanderthal-human interbreeding in southwest Asia, where Iraq is located, as modern humans radiated out of Africa. Shanidar Z may provide some answers. CT scans of the fossils show there’s a petrous bone, a pyramid-shaped bone at the base of the skull. It’s one of the densest bones in the body, and if there’s any hope of DNA being preserved in the hot dry conditions of Iraqi Kurdistan, that bone is their bet bet.

We still don’t understand why Neanderthals went extinct. Some scientists think they were outcompeted for resources by modern humans. Others have suggested that they could not adapt to a changing climate. Shell fragments from snails and bone shards from mice in the sediment around the bones could provide some clues. Barker explained:

Small animals are particularly sensitive to climate change. Greenland ice cores give us a general global picture, but these tiny bones can tell us about changing climates in Kurdistan at the time when Neanderthals were roaming its mountains.

The new Neanderthal bones are currently on loan to Cambridge University for conservation and further study. Pomeroy reflected on our current knowledge of Neanderthals:

In recent years we have seen increasing evidence that Neanderthals were more sophisticated than previously thought, from cave markings to use of decorative shells and raptor talons.

If Neanderthals were using Shanidar Cave as a site of memory for the repeated ritual interment of their dead, it would suggest cultural complexity of a high order. 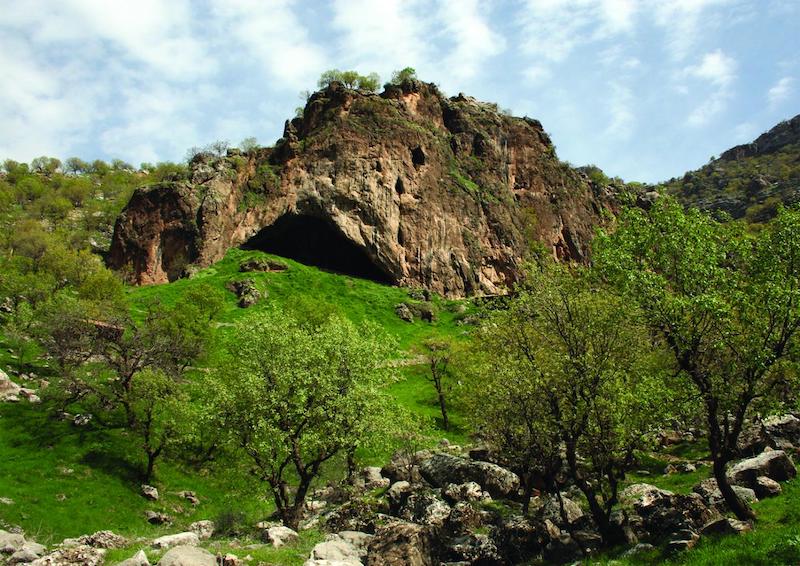 The entrance to Shanidar Cave, at the foothills of the Baradost Mountains in Iraqi Kurdistan. Image via Graeme Barker/ EurekAlert.

Bottom line: Archaeologists have found new Neanderthal remains at a famous possible burial site in what’s now Iraqi Kurdistan. The site – Shanidar Cave – became famous in the mid-20th century for the discovery of bones belonging to 10 individual Neanderthals. Preliminary findings indicate that the Shanidar Cave Neanderthals died about 70,000 years ago and that they were deliberately buried there.