There’s no sound in space. But – working with NASA – musicians and scientists turned a Hubble Space Telescope image of a galaxy cluster into music.

We stumbled on this video via a May 3, 2020, re-post at ScienceAlert. Matt Russo and Andrew Santaguida of System Sounds in Toronto – which calls itself “a sci-art outreach project” – created the video. It’s part of NASA’s Astrophysics Visualizations series. NASA explained the video this way:

Space becomes sonified in this visualization of a cluster of galaxies imaged by NASA’s Hubble Space Telescope. Time flows left to right, and the frequency of sound changes from bottom to top, ranging from 30 to 1,000 hertz. Objects near the bottom of the image produce lower notes, while those near the top produce higher ones. Most of the visible specks are galaxies housing countless stars. A few individual stars shine brightly in the foreground. Stars and compact galaxies create short, clear tones, while sprawling spiral galaxies emit longer notes that change pitch. The higher density of galaxies near the center of the image – the heart of this galaxy cluster, known as RXC J0142.9+4438 – results in a swell of mid-range tones halfway through the video. Hubble’s Advanced Camera for Surveys and Wide Field Camera 3 acquired this image on August 13, 2018. 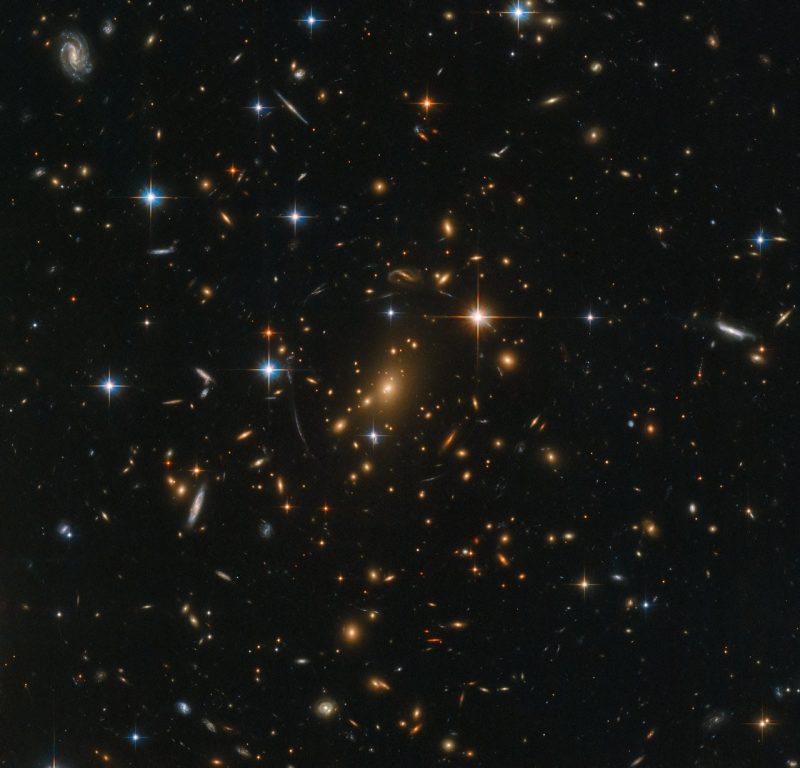 Here’s the original Hubble image of galaxy cluster RXC J0142.9+4438, later “sonified” by Russo and Santaguida. NASA wrote: “Galaxies abound in this spectacular Hubble image; spiral arms swirl in all colors and orientations, and fuzzy ellipticals can be seen speckled across the frame as softly glowing smudges on the sky. Each visible speck of a galaxy is home to countless stars. A few stars closer to home shine brightly in the foreground, while a massive galaxy cluster nestles at the very center of the image; an immense collection of maybe thousands of galaxies, all held together by the relentless force of gravity.” Read more about this image, which is via ESA/ Hubble & NASA, RELICS.