When I went to the Austin Alt Car Expo last week, I expected to see all kinds of futuristic-looking vehicles. Unimaginably small cars, electric hovercrafts, cars that drive themselves, cars that move in packs, tiny vans fueled by waste, scooters with sci-fi capabilities, and so on.

Alas, there were no flying scooters.

But my eyes were drawn to a fantastical motorcycle, positioned in front of a wall of solar panels. Next to the motorcycle stood Jim Corning. Corning owns Prometheus Systems, a solar installation business in Flagstaff, Arizona. He told me his electric motorcycle began as a hobby. 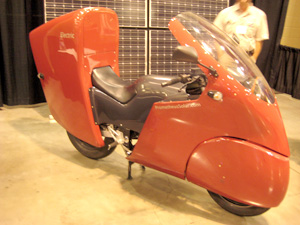 “I converted a small Kawasaki in order to test different kinds of batteries, and it got to be so much fun that I got focused on building a small motorcycle out of it,” he said.

The motorcycle was originally his wife’s, but somehow he convinced her to let him retrofit it with an aerodynamic design that not only looks spiffy, but allows speeds up to 70 mph.

Four solar panels can charge the lithium iron phosphate batteries for up to 50 miles a day. Corning has them as part of his solar system at home. The energy they harvest from the sun gets him to work every day.

“The point I’m trying to make is that here’s a machine that will give you 40 or 50 miles a day of transportation completely on renewable energy,” Corning said. “If we used electrics for our local travel going to work and going to the store, and used fossil fuel for cross-country trips, we could get back where we were self sufficient for energy in this country. And wouldn’t that be fun?”

Yes, that would be fun, I said.

It’s easy to see how this idea could catch on. Corning fielded a constant stream of questions at the Expo. He said he had to buy an open face helmet so he can answer questions at traffic lights, while he’s on the bike.

I like Corning’s idea of two different types of vehicular travel – local and nationwide. Americans rack up most of their miles with short trips – to work, to school, to the grocery store. If all those trips were carbon-neutral, we would be putting a sizable dent in reducing emissions nationwide. Now, does anyone want to convert my station wagon for me?

Thank you! Your submission has been received!
Oops! Something went wrong while submitting the form.
END_OF_DOCUMENT_TOKEN_TO_BE_REPLACED