Cost of food in U.S. to rise due to drought

A USDA forecast, issued yesterday, suggests a 3 percent to 4 percent rise in the cost of groceries in 2013, due to drought now affecting two-thirds of the U.S.

The U.S. Department of Agriculture said yesterday (July 25, 2012) that the severe drought now affecting major portions of the U.S. means that consumers can expect to pay 3 percent to 4 percent more for groceries in 2013. Products that might increase in price include milk, beef, chicken and pork. That’s because the U.S. drought is now affecting 88 percent of the corn crop, a staple of processed foods and animal feed as well as the leading U.S. farm export. The prices for fruits and vegetables, as well as processed foods, aren’t affected as much by the drought.

The U.S. Drought Monitor currently reports that two-thirds of the continental United States is now in a moderate to exceptional drought. 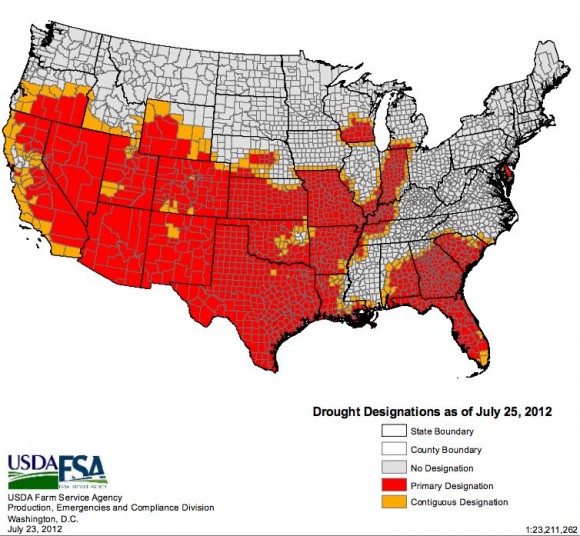 The drought was affecting 60% of the U.S. by July 2012 according to the U.S. Drought Monitor. Image Credit: USDA

Also on July 25, Agriculture Secretary Tom Vilsack designated 76 additional U.S. counties in in the states of Indiana, Illinois, Kansas, Michigan, Nebraska and Wisconsin as primary natural disaster areas due to damage and losses caused by drought and excessive heat. During the 2012 crop year, the U.S. Department of Agriculture (USDA) has designated 1,234 counties as disaster areas due to drought. This designation lets qualified farm operators in those counties eligible for low-interest emergency loans.

So far, 2012 is the hottest year ever recorded in the United States, according to the National Oceanic and Atmospheric Administration, whose records date to 1895. That has sapped the production of corn, soybeans and other crops, afflicting poultry and livestock in turn, according to the New York Times in a story today, which also reported:

[The 2012 U.S. drought] is also harming parts of the infrastructure. Highways in Texas, nuclear power plants in Illinois, runways and subway rails in Washington and the concrete, steel and sophisticated engineering that undergird the nation’s infrastructure are being taxed to worrisome degrees by heat, drought and vicious storms.

Bottom line: The U.S. Department of Agriculture has issued a forecast for food prices in 2013, suggesting a 3 percent to 4 percent rise in the cost of groceries in 2013. Two-thirds of the continental United States is now in a moderate to exceptional drought. So far, 2012 is the hottest year recorded in the United States since 1895.