Can antibiotics cure your cold?

If you answered “yes” to that question, you desperately need the CDC’s antibiotic awareness campaign.

With the profusion of holidays in late fall, it’s easy to miss an under-promoted event like “Get Smart About Antibiotics Week”, the Centers for Disease Control’s good-hearted though inelegantly titled campaign to improve our troubled relationship with these essential medications. While I do wish the CDC could have come up with a snappier name for its effort (perhaps we’ll try improving on that a little later) a better understanding of how antibiotics should be used is urgently needed if we want to retain their benefits (trust me, we do). And look, we’re in the middle of the event right now (Nov 12-18)! Let the smartening begin! 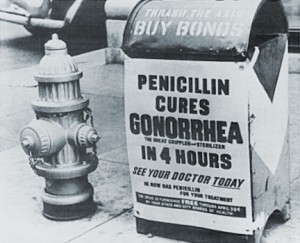 Not including time spent in the waiting room. Image: NIH.

First, the basics. Antibiotics are drugs that kill or restrict the growth of pathogenic microorganisms. Beginning with penicillin in the mid 20th century, the use of antibiotics has turned once untreatable and potential fatal infections into minor inconveniences and embarrassments. But as our species has become increasingly dependent on antibiotics, the many species of bacteria we use them on have in turn become more resistant. And emerging strains of multidrug-resistant bacteria are threatening to send us back to the dark days before germs could be zapped with shots and pills.

Bacteria have come up with some impressive tricks for thwarting antibiotics. They can modify an antibiotic so that it no longer functions (sort of like snipping the right wires to defuse a bomb). They can alter their own structure, so an antibiotic can’t act on its expected target. Some bacteria even have pumps in their membranes that shoot antibiotics right back out before they can do any damage. And bacteria have more options for dispersing these skills than do clunky macroorganisms like ourselves. While some sharing of antibiotic resistance genes happens when favorable mutations are passed on to offspring, much of the DNA exchange is done “horizontally”. That is, bacteria can pick up resistance genes from other bacteria as easily as humans can share cat GIFs on the internet.

It’s no surprise that bacteria are evolving resistance to our clinical antibiotic use. Penicillin resistant strains of bacteria turned up just a few years after the drug’s introduction into medicine. Bacterial resistance to antibiotics is an inevitability, and the best we can do is stay a few steps ahead of it so that we don’t completely run out of effective treatments. Limiting antibiotic use to when it’s absolutely necessary would certainly help. Unfortunately, we often do pretty much the opposite.

There’s no cure for the common cold 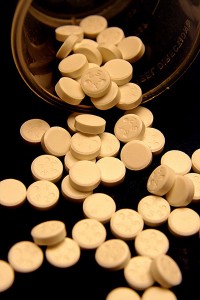 Antibiotics can be used to treat a number of maladies that result from bacterial infection.* Examples include STDs such a chlamydia and gonorrhea, respiratory ailments like bacterial pneumonia and tuberculosis, certain skin infections, and the playground plague of strep throat. But what’s more important is the long list of problems antibiotics won’t fix, namely anything caused by a virus. Viruses are responsible the common cold, flu, mononucleosis, many cases of bronchitis and most sore throats. Yes, even the godawful swollen-lymph-nodes, hurts-to-swallow variety of sore throats are frequently NOT strep, which is why it’s best to confirm the diagnosis with laboratory testing before starting antibiotics. What all this means is that, more often than not, when you get sick it’s due to a viral, not bacterial, infection and that when you drag yourself to the doctor’s office in the hopes of easing your suffering, the best thing he or she can advise is that you go right back home and get some rest.

Antibiotics will do NOTHING for viral ailments, and yet they often get prescribed anyway to placate grumpy frustrated patients – and even more so, grumpy frustrated parents of sick children – who want something in return for their efforts beyond a recommendation to drink plenty of fluids and take it easy. The trouble is that taking an antibiotic for a viral infection isn’t equivalent to taking a placebo. Every time you take antibiotics, even when you follow the directions exactly, you risk creating resistant bacteria. That’s because antibiotics don’t just attack one pathogen, they can go after numerous species living in your body, including potential future pathogens**

In terms of more immediate concerns, antibiotics can also destroy helpful species, like the normal intestinal or vaginal bacteria whose abundant numbers keep troublemakers like Clostridium difficile and Candida albicans (bringers of diarrhea and yeast infections, respectively) in check. So yeah, you don’t want to take antibiotics if you don’t need to. Think of it this way, you’re not going to the doctor for a prescription, you’re going for a diagnosis. And if that diagnosis indicates that antibiotics won’t help, then at least you’re spared an additional trip to the pharmacy. Now go drink some tea and watch a few episodes of Mad Men (currently my preferred supportive therapy for colds).

Over-prescription isn’t the only factor contributing to antibiotic resistance. Patient compliance is also an issue. For instance, when your doctor prescribes a medication to be taken for ten days, but you stop after five because you’re feeling better and the pills are giving you stomach aches or some other annoying side effect. Or how about this one: you and your boyfriend or girlfriend both have symptoms of strep throat but only one of you has access to a doctor, so that one goes to get the pills and then you go sharesies, because half a dose is better than none? (True for cookies, but not antibiotics. DO NOT split your medication with others.)

Doctors might be able to improve patient compliance by adjusting their bedside manner. As someone with a long history of being a “difficult” patient, I can tell you that certain people need more information than others. A tip for healthcare professionals: when dealing with distrustful, authority-adverse personality types, you should assume that your orders will not be followed unless you convincingly explain the reasons behind them. Such patients are more likely to take the pills as prescribed if they understand that failure to do so can kill off the weaker bacteria while leaving the stronger, more resistant ones to proliferate, thus causing another round of infection that will require even more antibiotics to treat. So consider mentioning that.

Or there’s the paternalistic solution of standing over patients’ shoulders and making sure they take every single dose, politely called “directly observed therapy” (DOT). Not the most practical approach, DOT is reserved for high stakes ailments such as tuberculosis (TB), where bacterial mutation rates are high and effective drugs are running low.***

The CDC’s awareness raising campaign focuses primarily on medical antibiotic use and misuse. However, in the United States well over half of antibiotics are given not to sick humans but to healthy animals. Antibiotics can treat bacterial infections in both plants and animals, but in industrial farming they are also added to animal feed in sub-therapeutic doses (i.e., not enough to treat active infections). This is done partly to prevent ailments that flourish in crowded farm conditions but also to speed the fattening of animals for meat production. Possibly due to changes to gut microbe populations, livestock animals fed antibiotic supplements put on weight faster.

(You’re perhaps wondering if the same is true for humans. That is, can antibiotics cause weight gain? There’s no consensus yet, but scientists are looking into it.) 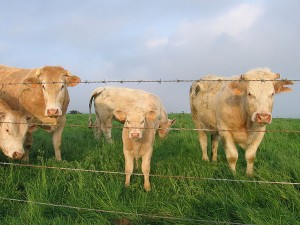 The antibiotic-free, but rather surly, cows of Europe. Image: JelleS.

The antibiotics fed to animals are the same ones used to treat human illnesses, and their low doses encourage the emergence of bacterial resistance. The extent to which resistant strains of bacteria in animals threaten human health is somewhat disputed (particularly by those involved in industrial livestock farming), but research suggests that resistant strains can and do jump between humans and animals. Earlier this year, genome sequencing showed how a strain of methicillin-resistant Staphylococcus aureus (MRSA) – a major problem in hospitals and other healthcare settings – had moved from humans to pigs and then back again, picking up its antibiotic resistant in the swiney portion of the journey. Given that many human microbial infections originate in animals, it seems unrealistic to expect livestock-borne drug-resistant bacteria to politely stay on the farm.

As of 2006, use of antibiotics as growth promoters in livestock is prohibited in the European Union. The FDA has been slower to act, having managed only a “voluntary initiative” thus far. Basically, they’re asking nicely that the industry pretty please stop using antibiotics to fatten livestock. We’ll see how that works out for them. In the meantime, it’s up to U.S. consumers to sift through the sea of confusing and inconsistent labels if they want an antibiotic-free pork chop. Here’s a helpful guide for the omnivores among you.

Of course antibiotics aren’t the only drugs battling it out with constantly evolving resistant pathogens. But Nov 12-18 is “Get Smart About Antibiotics Week” not “Wise Up About Antivirals Week”. Speaking of which, let’s see what we can do about pizazzing up that lackluster name. Here are a few alternatives:

That’s all I have for now. Other suggestions are welcome, especially from those who work in advertising.

* Use of the term “antibiotic” is a bit varied. From here on out, I’ll stick to the CDC standard, in which “antibiotics” denotes only those medications that act on bacteria. If it’s used against a fungal infection (ringworm, athlete’s foot, etc.) it’s an “antifungal”.

** An example: Staphylococcus aureus can live on human skin and in nasal passages without causing any disturbance. However, if it enters the body through an injury or surgical incision, infection can occur. Taking antibiotics can create resistant strains of Staph, which are then much harder to treat should these microbes leave their normal places of residence.

*** TB is also treated with several drugs taken at the same time. This strategy helps reduce the emergence of resistant strains, as the probability of bacteria simultaneously acquiring mutations to outwit several drugs is much lower than for a single drug.