Bridget Scanlon and other scientists say we need to know where our water resources are, and what options society can leverage to use these resources most effectively.

Will we have enough water for 9 billion people, projected by the year 2050?

I think we’ll have enough water for that population.

But you say there’s a hidden cost of water in everything we use and consume. Tell us about that.

That’s right. When you ask them how much water they use, a lot of people think of the household usage for laundry and showering and things like that. But our food choices involve a lot more water.

What do you mean?

People may have heard of the carbon footprint. Similarly there’s a water footprint. The water footprint represents how much water is required to produce whatever product we’re talking about. It could be a car, or a steak or whatever. It represents the amount of virtual water that’s embodied in that product.

The highest water footprint is for beef, followed by other types of meats. The lowest is for vegetables and some fruits. A kilogram of steak would represent about 15,000 liters of water, a cup of tea, maybe 35 liters.

The problem with our increasing human population is that dietary preferences are also changing around the globe. When I visit China and India, I see a lot more ice cream and dairy products. They’re moving toward a more western type diet, which is a more water-intensive diet. 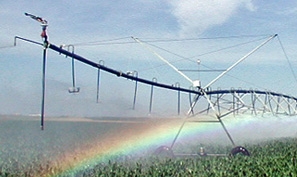 Tell us about water used for food production. We understand irrigation is a special concern of yours. Is the way we irrigate our fields sustainable?

I would say it is sustainable in some regions but not in most. Currently, about 90 percent of global freshwater resources is consumed by irrigated agriculture. Water shortages are most likely to occur where irrigation is most widespread.

Why do food producers continue to irrigate then?

For example, in the North China Plain, they grow winter wheat despite the fact that their rain occurs in the summer. The Central Valley in California is a Mediterranean climate with winter rainfall, but they grow crops in the summer. So irrigation is used to circumvent that kind of temporal or seasonal disconnect.

Also, there are spatial disconnects. We grow a lot of our food in semi-deserts, because of high solar radiation and good soils, and because we can move water around. Those areas have a lot of positive aspects for crop production, but they may be lacking enough water to grow food. So groundwater or imported surface water or water from other sources has to be provided.

But water is a renewable resource, isn’t it?

Yes, to some extent. You can use the analogy of a bank balance, and think of the groundwater system as how much water you have in the bank. The health of your bank account depends on how much you put into the bank account versus how much you withdraw. 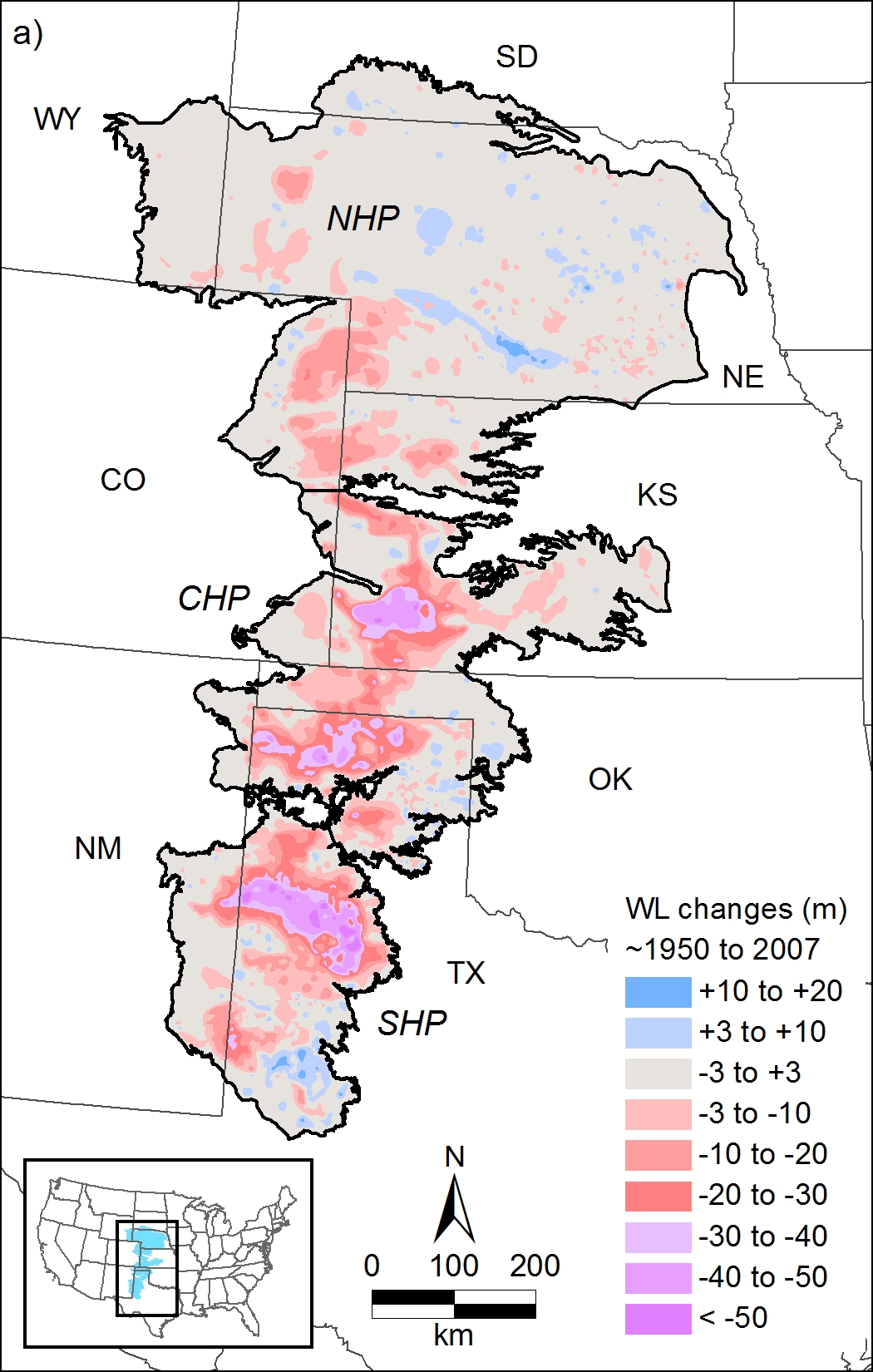 The extent of the High Plains Aquifer. Some of the water in this system was deposited 10,000 years ago. Figure courtesy Bridget Scanlon. See larger image.

We use the term fossil groundwater to describe some aquifer systems because they were recharged about 10,000 years ago during Pleistocene times when the climate was cooler and wetter. For example, in the High Plains Aquifer in Texas and Kansas and other U.S. states, much of the recharge of that system occurred during Pleistocene times. The rate of depletion of that aquifer is up to 10 times the rate of recharge currently. It’s clearly not sustainable then to extract a lot of water from fossil groundwater.

What sorts of things can be done to solve the problem of accelerating depletion of groundwater?

An example of a way to use groundwater more sustainably is in the Central Valley in California. They have a large pipe system that pipes water from the humid region in the north where they have about 650 millimeters of rainfall a year, down to the desert-like region in the south, where they get 150 millimeters of rainfall. By piping this water into this system then and irrigating with surface water they can replenish the groundwater and recharge it. By mixing surface water irrigation with groundwater irrigation, they can make it more sustainable.

What are some other solutions?

Conserving water and in urban areas by, for example, reducing lawn watering and outside irrigation.

A lot of areas are looking at desalinating brackish water or desalinating seawater as another approach. In response to a 13-year drought, Australia constructed desalination plants in the cities around the coast. In those situations, we are borrowing from the energy side to provide more water. So there’s always a trade off.

There are projections that we will have more droughts and floods in the future with intensification of the water cycle. So it would be important that we can scalp water excesses and store them for times when we have limited water availability. For example, in California’s Central Valley, they take excess water from the State Water Project or the Federal Water Project, store a few cubic kilometers of groundwater in the aquifer – in what they term Groundwater Bank – and then remove it during droughts.

Let’s talk about water and energy for a moment. How are they linked?

For example, here in Texas, energy production accounts for about three percent of the state’s water consumption, but it withdraws a lot more water.

The issue with energy and water is the need for reliable water sources to ensure the constant production of electricity. The problem is that, oftentimes, water needs for electricity are out of phase with water availability. That is, when we need energy the most, for example during heat waves or droughts, is when we have the least amount of water available.

Here in Texas, most of the power plants depend on surface water which is the most vulnerable to drought. So we have our highest energy demands when we have the least amount of water available in surface water sources.

Consider the city of San Antonio. It takes groundwater from the Edwards Aquifer and pipes it and stores it in a porous medi-aquifer, and then takes it out during times of drought. That avoids the problems of large-scale evaporation from surface water reservoirs also. The drought in 2011 in Texas was the most extreme drought on record. And evaporation rates in reservoirs were up by about 10 percent according to Texas Water Development Board staff. So storing water in aquifers also avoids the problem of large-scale evaporation and losses.

In closing, what would you like people to understand about our groundwater resources?

I think it’s important that people understand how much water they use and where it’s coming from, and how scarce it is in that region.

And it would be nice if ultimately food products were labeled as to whether they were grown with irrigation or not. If that happened, we could make better choices as consumers about what we do that would maybe reduce impacts on water.

Overall, I’d say we all need to understand our water system better. And then we need to do our part to try to reduce water consumption.