A record deadly week for US avalanches in early February

2021 has brought a deadly avalanche season. “We’re only halfway through the season and we’re 3/4 of the way to the number of fatalities we’d see in a typical year. The dangerous, record-breaking year keeps avalanche forecasters up at night,” one expert said. 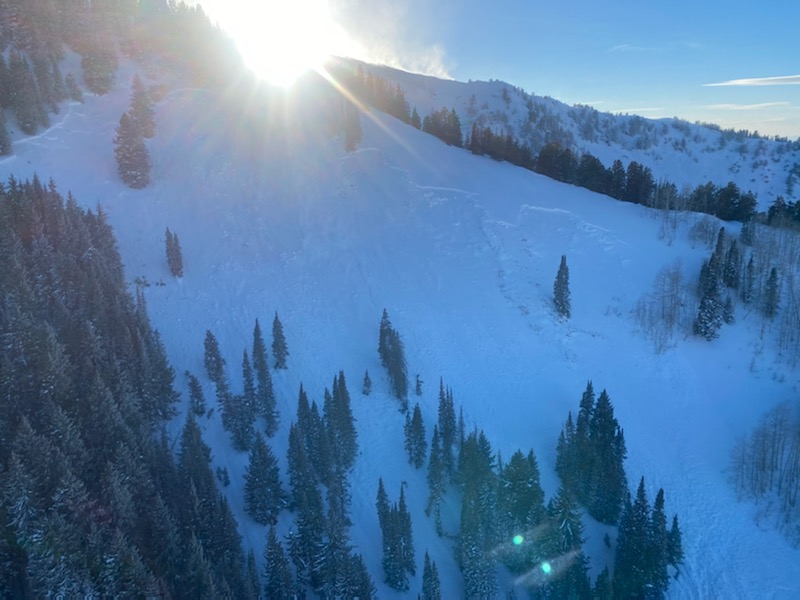 The Wasatch Backcountry Rescue in Utah took this photo of the area where 4 people were killed in an avalanche on February 6, 2021. Note the area near the top where the snow has broken away and slid down the slope. Image via Utah Avalanche Center.

The United States had its deadliest week for avalanches in more than a century between January 30 and February 6, 2021. With 15 deaths during that period, the week is now on record as the worst week for avalanche deaths in the U.S. since March 1, 1910, when 96 people died in the Stevens Pass avalanche in the state of Washington after two trains were swept off their tracks. At this writing, a total of 22 people have died in U.S. avalanches so far during the winter of 2020-2021, and there are still two months of avalanche season left. Why has this year’s avalanche season been so deadly? And what should you do if you’re caught in an avalanche?

Why is this year’s avalanche season so dangerous? Avalanche season is generally considered to run from December to April, but avalanches can occur during any month of the year. For an avalanche to occur, the only ingredients needed are a mass of snow and a slope for the snow to slide down.

Brian Lazar, deputy director of the Colorado Avalanche Information Center, which tracks national avalanche fatalities, spoke about this year’s deadly avalanche season with radio station WBUR in Boston. He told Tonya Mosley and Serena McMahon that 2021’s avalanche season is deadly due to a “pronounced and reactive weak layer” within the snowpack structure in many locations across the U.S. That dangerous snow layer is due to a light early snowfall in the U.S. autumn of 2020, followed by storms that dropped lots of snow. The weak base of snow allows the newer snowpack to collapse and slide easily. Lazar also told Mosley and McMahon:

We’re only halfway through the season and we’re three-quarters of the way to the number of fatalities we’d see in a typical year.

The dangerous, record-breaking year keeps avalanche forecasters up at night.

The coronavirus may be playing a role in the increase in deaths, too. More people have been venturing outdoors, where the risk of transmitting the virus is lower. In addition, avalanches are more of a danger in the backcountry, areas that people are heading to in order to avoid crowds.

15 avalanche deaths in one week. In the early February incident, two groups of four skiers each in Millcreek Canyon, Utah, were buried by an avalanche in which four survived and four did not. On February 6, the skiers were buried in an avalanche that took the lives of two men and two women in their 20s. The experienced skiers were at an elevation of 10,000 feet (about 3,000 meters) when the avalanche struck.

Also on February 6, in Montana, a man died on his snowmobile in an avalanche in the Swan mountain range. It was the ninth straight day that snowmobilers had triggered large avalanches in Montana.

Three hikers were buried in an avalanche in Alaska on February 2. The men had gone hiking in the Bear Mountain area outside Anchorage. Searchers began looking the next morning after they were overdue and discovered their bodies buried in shallow snow. 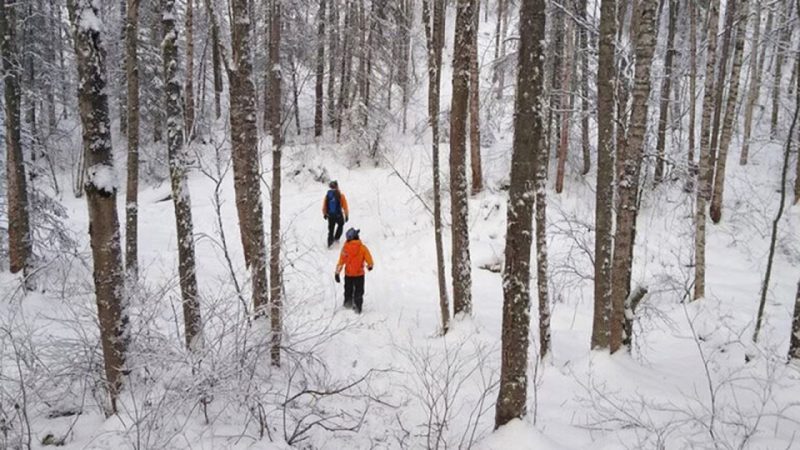 On February 1, three men skiing in Colorado were killed in an avalanche. All of the men worked in government in the small town of Eagle and were skiing outside of Silverton. The search party found the men with the aid of the victims’ transmitting beacons under 20 feet of snow. They were the fifth, sixth and seventh avalanche victims in Colorado so far this season. 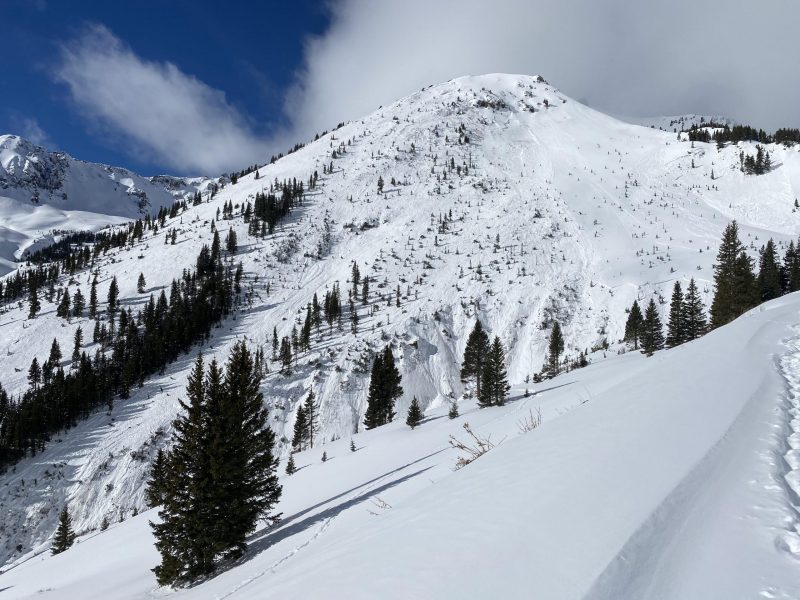 The area of Colorado where three skiers died is called The Nose. The remnants of the avalanche are visible on the far slope, where the snow looks jumbled, not smooth, within the expanse of trees. Image via Colorado Avalanche Information Center.

In addition to these 11 victims, the other four avalanche fatalities include a snowmobiler in Washington, a skier in Utah, a skier in New Hampshire, and a skier in Colorado.

Close calls with avalanches. Other outdoor adventurers have had close calls with avalanches this season. Miles Penrose posted to his Instagram account on February 7, sharing video of an avalanche that buried him and his friends while snowmobiling in the backcountry. The video was tweeted by ABC News. Miles tried to deploy his chute on his airbag backpack, but it didn’t work. One of his friends was able to deploy his airbag, which Miles believed saved his friend’s life.

BURIED: Terrifying footage shows an avalanche roaring towards a group of sledgers in Utah, and audio captures the aftermath after the group manage to escape after being buried. Other avalanches in the state in recent days left multiple people dead. https://t.co/hNv1LNBtNh pic.twitter.com/Ig5ypdLT4N

How to increase your odds of surviving an avalanche. While proper protective gear is essential while in the backcountry in winter, it’s important to know that all four of the skiers who died in the February 6 avalanche in Utah were carrying the necessities. Gear is no guarantee of survival. The three key pieces of equipment are an avalanche beacon, which transmits a signal to help others in your group locate you; a probe, which is a long folding rod used to stick into the snowpack to feel for a body below; and a shovel to help dig victims out.

Another device used to protect against avalanches is a backpack airbag, as seen in the video from Inside Edition. When the avalanche approaches, skiers can pull the cord to inflate the airbag and lift them above the snow, so they are riding it down instead of getting buried under it. Even with the right gear, avalanches can hit people with the force of being struck by a car and push them into objects such as trees. As seen above, snowmobiler Miles Penrose’s airbag did not open, while his friend’s did. Protective gear is only your last resort.

The best thing you can do is to avoid areas at high risk for avalanches. Stay off slopes greater than 30 degrees. Just hours before the avalanche that killed the four hikers in Utah on February 6, the Utah Avalanche Center tweeted a message that said: “High Danger. Large natural avalanches overnight. Dangerous avalanche conditions. Keep it low angle.” Low angle is a reference to staying on ground that is sloped less than 30 degrees.

To stay safe, pay attention to warnings and be willing to change your plans if conditions are dangerous. There are avalanche awareness classes that anyone can take to learn how to spot dangerous areas and what to do in case you are caught in one.

Some signs to look for when in the backcountry:

Recent avalanches. If you see signs that an avalanche has already occurred in the area, that doesn’t mean you’re safe from another one. It means you are in a location that is prone to avalanches and you should move out of the area.

Appearance of cracks. If you are out on the slopes and see cracks shooting through the snow, an avalanche may be starting.

A whumpfing sound. When the snowpack collapses, the air will rush out and create a “whumpfing” sound. It can coincide with the appearance of cracks.

Bottom line: The avalanche season is particularly deadly already this year, due to a weak base of snow and late start to snowstorms. Follow these tips to know if an avalanche is imminent, take protective gear, or stay off the slopes altogether.