Researchers to spend a year trapped in Arctic ice

In October 2019, the research icebreaker Polarstern will drop anchor at an ice floe in the northern Laptev Sea, to spend a year investigating Earth’s Arctic. 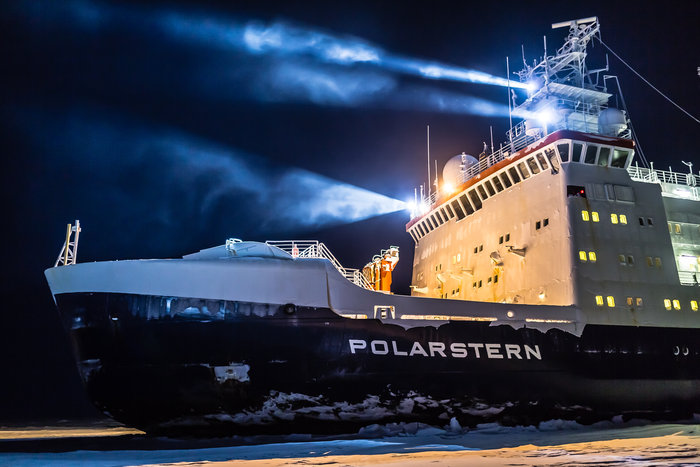 This German research icebreaker, Polarstern, will spend a year trapped in Arctic sea ice in what researchers are calling “the biggest polar expedition of all time.” Image via ESA.

In October 2019, the research icebreaker Polarstern (“Polar Star”) will drop anchor at an ice floe in the northern Laptev Sea, marking the beginning of a year-long international investigation into Earth’s Arctic. The expedition is called MOSAiC – Multidisciplinary drifting Observatory for the Study of Arctic Climate – and it’ll spend the coming year trapped and drifting in the sea ice. In a statement about the expedition, released by the European Space Agency (ESA) on September 24, 2019, scientists said it is:

… the biggest shipborne polar expedition of all time.

And – although there’ve been many expeditions to the Arctic over time – this one is sure to be among the harshest. Roughly 100 people will be researching, working and living on board the icebreaker and on the sea ice itself. They’ll brave the upcoming polar winter, which will feature 24-hour darkness, storms and temperatures that can drop to -40 degrees Fahrenheit (also -40 degrees Celsius). The expedition will include scientists from many nations. It’s being spearheaded by the Alfred Wegener Institute (AWI) of the Helmholtz Centre for Polar and Marine Research, based in Bremerhaven, Germany. Christian Haas – a sea ice expert at AWI – commented:

We want to better understand the processes and energy flows between the ocean, ice and atmosphere – and how they change over the course of the seasons.

We will also compare the data with satellite data, in particular with ESA’s CryoSat, which was specifically launched to measure ice thickness. This will allow us to observe how the ice grows and becomes thinner.

The European Space Agency (ESA) also has a hand in this expedition, with a range of experiments. Tânia Casal, science campaign coordinator for ESA, commented:

The MOSAiC expedition offers a unique opportunity to considerably improve our understanding of ocean–ice-snow–atmosphere processes and this will contribute to a more accurate modelling of future Arctic climate scenarios.

We want to make sure that data associated with these processes delivered by ESA satellites and by the Copernicus Sentinels as well as from missions under development have the best possible impact. So we are contributing to the expedition with a range of calibration and validation activities.

For example, as Dr. Haas mentions that arrangements have been made for measurements to be taken that will be used to validate CryoSat, but also that validate the Copernicus Sentinel-1 radar mission. 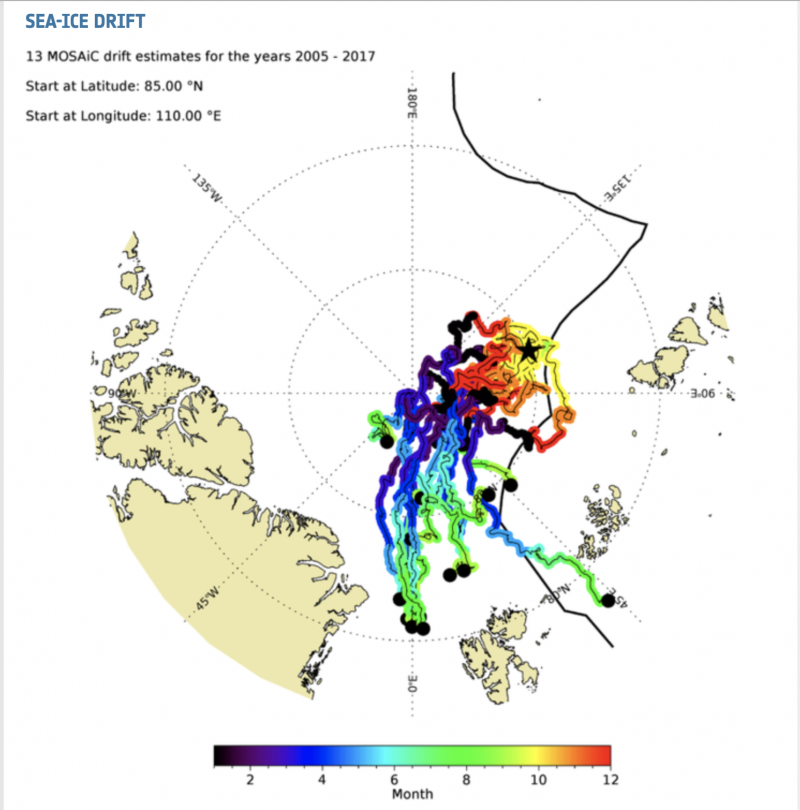 View larger. | The potential drift route of the research vessel Polarstern can be roughly estimated in advance by reconstructing the course that the ice followed from the vessel’s starting point in past years. This involves the use of satellite data, which depicts the ice drift in the Arctic on a daily basis. The image shows sample drift trajectories for the years 2005 to 2017 and a potential starting point near 85°N/130°E. The start date for the drift analysis is always October 1. Image via ESA.

The state of Earth’s climate was recently outlined in a detailed new report produced for the U.N. Climate Action Summit, held in New York City on September 23, 2019. ESA said:

[The report] says that the five-year period from 2014 to 2019 is the warmest on record and that sea-level rise has accelerated significantly over the same period as carbon dioxide emissions have hit new highs.

However, the Arctic is warming twice as fast as the global average. Since Earth’s climate works as a system, the consequences of this rapid warming are not only being felt in this remote polar region, but also across the planet.

Needless to say, a better scientific understanding of the complexities of the fragile Arctic environment is critical for policy decisions on climate-change mitigation and adaptation, and for setting up a framework for managing Arctic development sustainably. 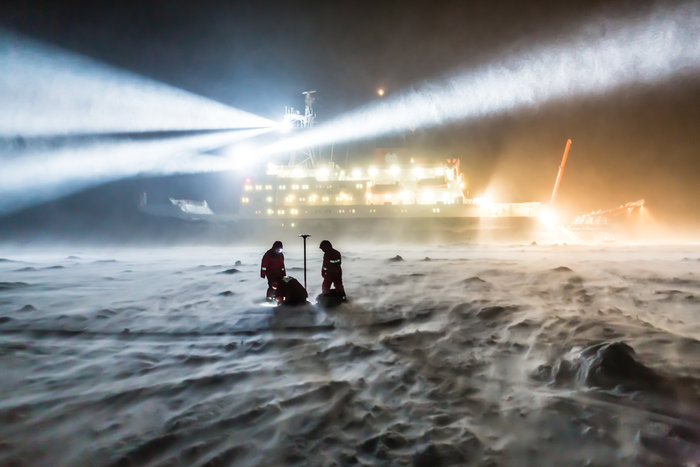 Scientists working in the long polar night. This image – from 2013, in Antarctica – shows scientists studying the properties of snow for later validation of ESA’s CryoSat satellite data. The icebreaker vessel Polarstern is in the background. Image via ESA.

Bottom line: The largest-ever shipborne expedition to the Arctic will drop anchor at an ice floe in the northern Laptev Sea in October 2019, then spend a year trapped in Arctic ice.

Read more: What climate change in the Arctic means for the rest of us