The American Astronomical Society – chief organization for US astronomers – said it is in conversations with SpaceX about the impending launch of 12,000 Starlink satellites. The astronomers worry the satellites will interfere with their work of understanding the universe. 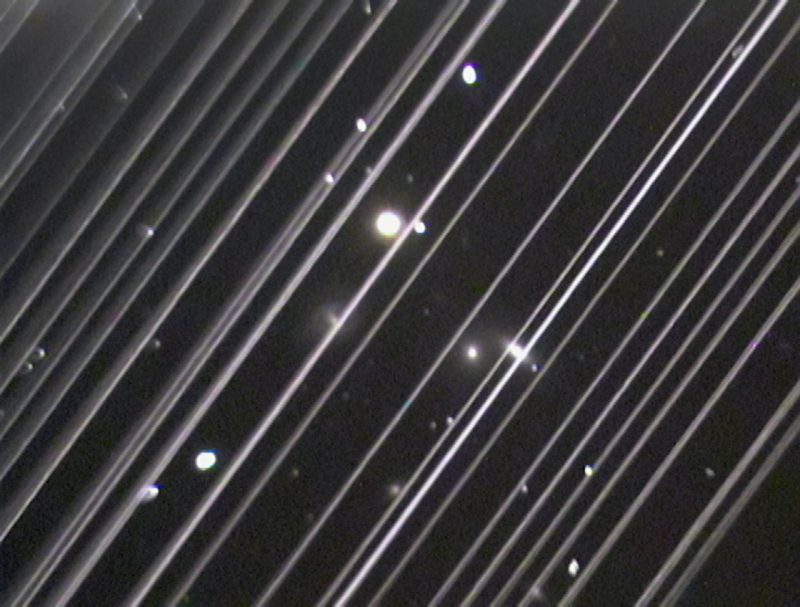 Galaxy group NGC 5353/4 seen with a telescope at Lowell Observatory in Flagstaff, Arizona, on May 25, 2019. The diagonal lines are trails of reflected light left by more than 25 of the 60 recently launched Starlink satellites, as they passed through the telescope’s field of view. Following their initial orbits, the satellites will diminish in brightness as they are boosted to a final orbital altitude. How bright will they ultimately be? That’s as yet unclear. Image via IAU/ Victoria Girgis/ Lowell Observatory.

On May 23, 2019, entrepreneur Elon Musk’s company SpaceX launched 60 Starlink communication satellites aboard a single rocket. Within days, skywatchers worldwide spotted them flying in formation as they orbited Earth and reflected sunlight from their shiny metal surfaces. Some people, unaware that artificial satellites can be seen moving against the starry background every clear night, reported UFO sightings. Astronomers, on the other hand, knew exactly what they were seeing … and immediately began to worry.

SpaceX had suggested that the satellites would be visible just barely, if at all. But – in the days after launch – the Starlink constellation shone as brightly as many astronomical constellations, and SpaceX intends to launch approximately 12,000 of these spacecraft as part of an effort to provide internet service to everyone in the world. Megan Donahue, of Michigan State University, is president of the American Astronomical Society (AAS). She said in a statement:

I think it’s commendable and very impressive engineering to spread the information and opportunities made possible by internet access, but I, like many astronomers, am very worried about the future of these new bright satellites.

The Starlink satellites and similar swarms being developed by other companies could eventually outnumber the visible stars in our night sky. 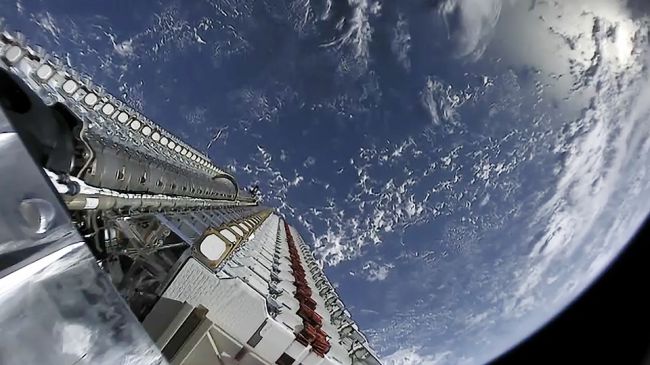 A view of SpaceX’s first 60 Starlink satellites in orbit, still in stacked configuration, with the Earth as a brilliant blue backdrop on May 23, 2019. Image via SpaceX/ Space.com.

The primary professional organization for U.S. astronomers is the American Astronomical Society (AAS). Among other activities, this group hosts twice-yearly meetings of astronomers across the nation. On June 8, 2019, at the 234th AAS meeting in St. Louis, Missouri, the AAS Board of Trustees adopted the following position statement on satellite constellations:

The American Astronomical Society notes with concern the impending deployment of very large constellations of satellites into Earth orbit. The number of such satellites is projected to grow into the tens of thousands over the next several years, creating the potential for substantial adverse impacts to ground- and space-based astronomy. These impacts could include significant disruption of optical and near-infrared observations by direct detection of satellites in reflected and emitted light; contamination of radio astronomical observations by electromagnetic radiation in satellite communication bands; and collision with space-based observatories.

The AAS recognizes that outer space is an increasingly available resource with many possible uses. However, the potential for multiple large satellite constellations to adversely affect both each other and the study of the cosmos is becoming increasingly apparent, both in low Earth orbit and beyond.

The AAS is actively working to assess the impacts on astronomy of large satellite constellations before their numbers rise further. Only with thorough and quantitative understanding can we properly assess the risks and identify appropriate mitigating actions. The AAS desires that this be a collaborative effort among its members, other scientific societies, and other space stakeholders including private companies. The AAS will support and facilitate the work by relevant parties to understand fully and minimize the impact of large satellite constellations on ground- and space-based astronomy.

The natural night sky is a resource not just for astronomers but for all who look upward to understand and enjoy the splendor of the universe, and its degradation has many negative impacts beyond the astronomical.

I appreciate the initial conversation we have already had with SpaceX, and I look forward to working with my AAS colleagues and with all stakeholders to understand and mitigate the effects of the rapidly increasing numbers of satellites in near-Earth orbit.

I’m looking forward to productive conversations between astronomers and SpaceX. I fully expect that we will come up with creative solutions that can serve as models for other companies to follow.

Bottom line: At its June 2019 meeting, the American Astronomical Society – chief professional organization for astronomers in the U.S. – issued a position statement about the SpaceX starlink satellites. It said, in part: “The AAS is actively working to assess the impacts on astronomy of large satellite constellations before their numbers rise further.”