How bright will the Starlink satellites be? 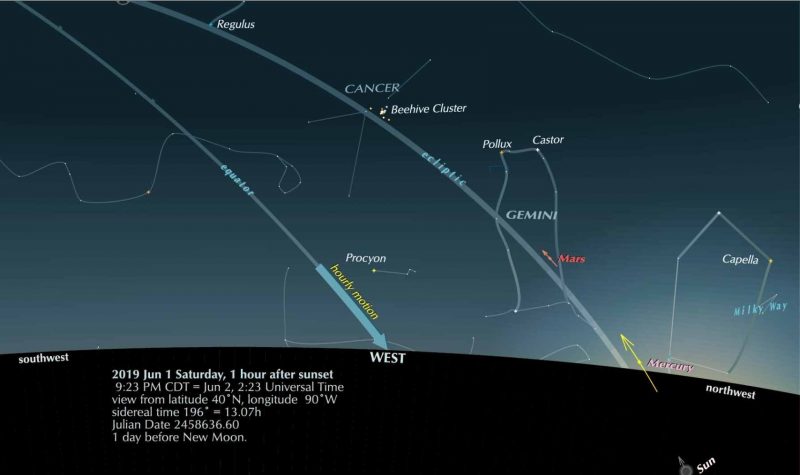 View larger. | West after sunset on an ordinary Saturday in early June. In 2019, Mars can be seen in this part of the sky. Some skywatchers fear the Starlink satellites – by virtue of their numbers – will interfere with astronomy. See the chart below. Chart via Guy Ottewell’s blog.

Editor’s Note: Skywatchers were awed last weekend to see a “train” of SpaceX Starlink satellites crossing the night sky. Many wanted to see them. Quickly, though, we began hearing rumbles from veteran observers about what will happen to our skies if and when SpaceX carries out its plan of deploying some 12,000 of these satellites. SpaceX expects to put roughly 720 satellites into orbit in 2019. No one is sure yet how bright the satellites will be when fully deployed and in their final orbits. This post from astronomer Guy Ottewell is one of many we’ve seen this week, expressing worry from lovers of Earth’s night skies.

The chart above shows the evening sky for Saturday, June 1, 2019.

Mars, traveling north of the northernmost part of the ecliptic, was at its greatest declination north (more than 24°) on May 16. But it is still falling lower in the evening sky, to pass behind the sun on September 2. Mercury, moving in the opposite direction, came from behind the sun on May 21 and will be farthest out on June 23.

The moon is well below the horizon at this time – it will be new, passing the sun, on June 3. So the sky will be dark, if clear of clouds and of light-pollution.

But the chart below represents what this sky might look like after Elon Musk’s SpaceX company and nine others have launched their “constellations” of commercial satellites. [Editor’s note: We hear the satellites will be moved to a higher orbit, making them too dim for the eye to see, except perhaps for the occasional flare when sunlight strikes them just so. Still … will they all be at the same high orbit? Will any of them be visible to the eye? Even if they can’t be seen with the eye alone, will they ruin astrophotos? Will they interfere with observations of professional astronomers? Many questions remain.] 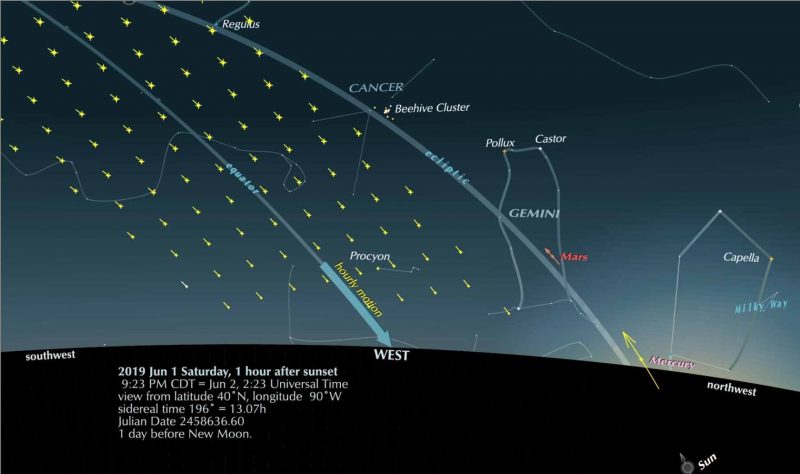 View larger. | This view is purely imaginary. It’s Saturday night’s sky (same chart as above), with multiple “trains” of Starlink satellites. We don’t know yet how bright the Starlink satellites will be, when all 12,000 of them are deployed and settled into their final orbits. Even if they’re not visible to the eye, will they interfere with astronomy, via their sheer numbers? Chart via Guy Ottewell’s blog.

Musk’s first 60 Starlink satellites were blasted into space on May 30.

They were 280 miles up and crossing from horizon to horizon in about five minutes. Their eventual height will be 240 miles (450 km), so that they will be less bright but above the horizon for longer and in sunlight for longer. They will be visible for three or four hours after sunset and before sunrise, which means that in the summer they will be visible all night.

There will be a first set of 1,584 of these satellites, and eventually 12,000. They are to be used for internet communication. Besides SpaceX, nine other companies are working on this “global space internet.”

Astronomers, as quoted by an article in The Guardian, were “surprised.” One said:

Everyone’s quite surprised by how bright they are.

… dismay as they began to calculate the potentially drastic impact on people’s views of the cosmos.

One might expect them to have rather easily, and early, calculated the extra light added to the sky and the area of sky blocked for telescopes.

Here’s how the first “train” of Starlinks appeared as it went over Holland.

SpaceX Starlink objects train May 24, 2019, from Marco Langbroek on Vimeo.

Is our children’s view of the universe to be roofed off by these “constellations” of artificial satellites?

There is something of an analogy with the constellation, or procession, or ant-trail of people now to be seen on Mount Everest. This photograph from a few days ago gave me a sharp shock:

Where is Sirius? Where is the long outdoors apprenticeship of getting to know the starry sky? Where is the epic of the gradual winning to the world’s summit?

Bottom line: Thoughts on possible damage to the night skies from the SpaceX Starlink satellites. SpaceX would have done the astronomy world a favor if it had calculated the satellites’ effect on the night skies in advance, and clearly communicated that effect.

There are some great details about the Starlink mission in this article from NASASpaceflight.com