On October 18, 2018, NOAA issued its annual Winter Weather Outlook for the United States for the months of December through February. According to NOAA’s Climate Prediction Center, a mild 2018-19 winter could be in store for much of the U.S., with above-average temperatures most likely across the northern and western U.S., Alaska and Hawaii.

Additionally, El Niño has a 70 to 75 percent chance of developing this year. Mike Halpert is deputy director of NOAA’s Climate Prediction Center. He said in a statement:

We expect El Niño to be in place in late fall to early winter. Although a weak El Nino is expected, it may still influence the winter season by bringing wetter conditions across the southern United States, and warmer, drier conditions to parts of the North.

El Niño is an ocean-atmosphere climate interaction that is linked to periodic warming in sea surface temperatures in the central and eastern equatorial Pacific. During the winter, typical El Niño conditions in the U.S. can include wetter-than-average precipitation in the South and drier conditions in parts of the North.

– Warmer-than-normal conditions are anticipated across much of the northern and western U.S., with the greatest likelihood in Alaska and from the Pacific Northwest to the Northern Plains.

– The Southeast, Tennessee Valley, Ohio Valley and Mid-Atlantic all have equal chances for below-, near- or above-average temperatures.

– No part of the U.S. is favored to have below-average temperatures. 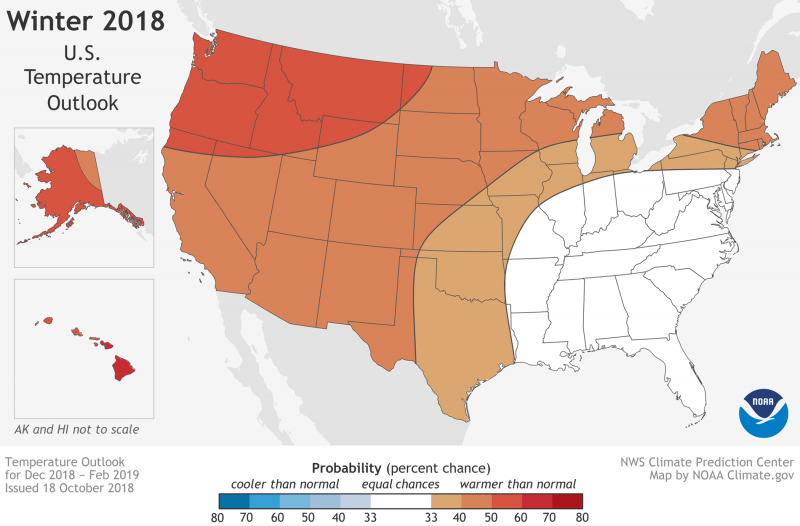 – Wetter-than-average conditions are favored across the southern tier of the U.S., and up into the Mid-Atlantic. Northern Florida and southern Georgia have the greatest odds for above-average precipitation this winter.

– Drier-than-average conditions are most likely in parts of the northern Rockies and Northern Plains, as well as in the Great Lakes and northern Ohio Valley. 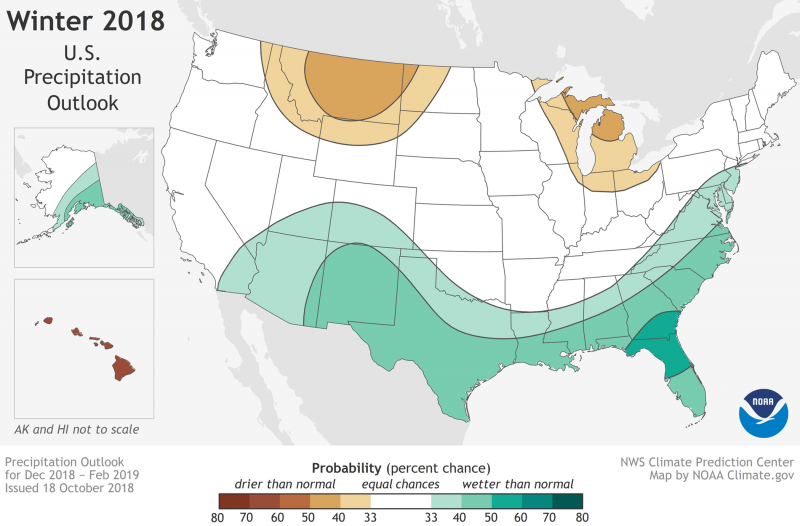 Drought conditions are likely to persist across portions of the Southwest, Southern California, the central Great Basin, central Rockies, Northern Plains and portions of the interior Pacific Northwest.

Drought conditions are anticipated to improve in areas throughout Arizona and New Mexico, southern sections of Utah and Colorado, the coastal Pacific Northwest and the Central Plains.

The outlook does not project seasonal snowfall accumulations. Snow forecasts are generally not predictable more than a week in advance. Even during a warmer-than-average winter, periods of cold temperatures and snowfall are still likely to occur.

NOAA’s Climate Prediction Center updates the three-month outlook each month. The next update will be available on November 15.

Bottom line: NOAA issued its annual Winter Weather Outlook for The U.S. for the 2018-19 season.