Why Arctic sea ice has stalled, and what it means for the rest of the world

In the next few decades, scientists expect we’ll see an ice-free Arctic Ocean throughout the summer. That prospect got much closer in 2020, due in part to the exceptional summer heatwave that roiled the Russian Arctic. 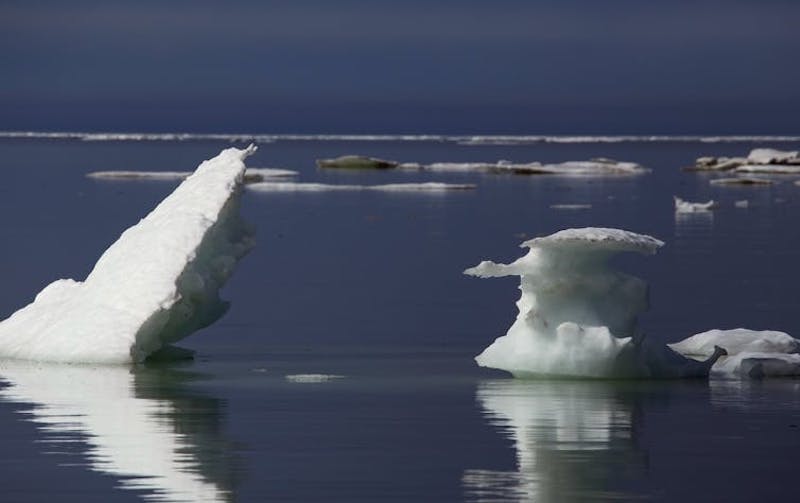 Ice floes in the Laptev Sea, which lies north of the Siberian coast. This part of the Arctic Ocean is usually a factory for new sea ice. But sea ice in the Laptev Sea reached a record low in 2020. Image via Olenyok/ Shutterstock.

By Jonathan Bamber, University of Bristol

Arctic sea ice plays a crucial role in the Earth’s energy balance. It is covered for most of the year by snow, which is the brightest natural surface on the planet, reflecting about 80% of the solar radiation that hits it back out to space.

Meanwhile, the ocean it floats on is the darkest natural surface on the planet, absorbing 90% of incident solar radiation. For that reason, changes in sea ice cover have a big impact on how much sunlight the planet absorbs, and how fast it warms up.

Each year a thin layer of the Arctic Ocean freezes over, forming sea ice. In spring and summer this melts back again, but some of the sea ice survives through the summer and is known as multi-year ice. It’s thicker and more resilient than the sea ice that forms and melts each year, but as the Arctic climate warms – at a rate more than twice that of the rest of the world – this multi-year ice is under threat.

In the last 40 years, multi-year ice has shrunk by about half. At some time in the next few decades, scientists expect the world will see an ice-free Arctic Ocean throughout the summer, with worrying consequences for the rest of the climate system. That prospect got much closer in 2020, due in part to the exceptional summer heatwave that roiled the Russian Arctic.

Shutting down the sea ice factory

The oceans have a large thermal capacity, which means they can store huge amounts of heat. In fact, the top meter of the oceans has about the same thermal capacity as the whole of the atmosphere. Many of us have experienced a balmy afternoon in autumn by the coast even though the air temperature inland is only a few degrees above freezing. That’s because the oceans accumulate heat slowly over the summer, releasing it equally slowly during winter.

So it is with the Laptev Sea, lying north of the Siberian coast. This part of the Arctic Ocean is usually a factory for new sea ice in autumn and winter as air temperatures dip below zero and surface water starts to freeze. That new ice is carried westward by persistent offshore winds in a kind of conveyor belt. 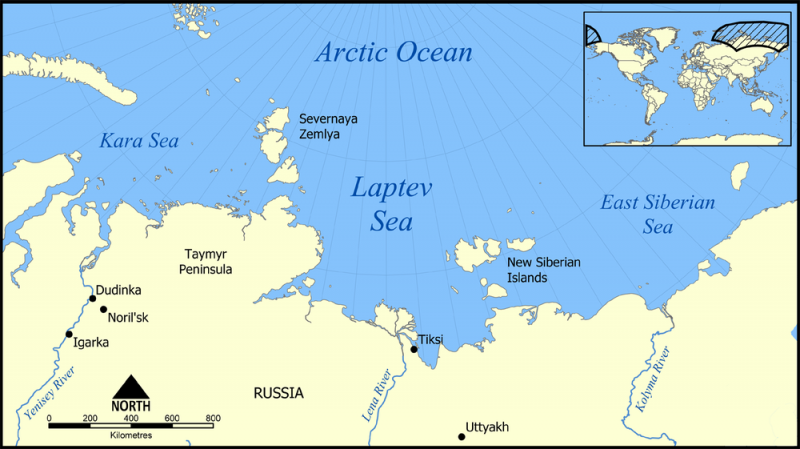 The Laptev Sea lies off the coast of northern Siberia. Image via NormanEinstein/ Wikipedia.

This process is powered by the formation of polynyas: areas of open water surrounded by sea ice. Polynas act as engines of new sea ice production by exchanging heat with the colder atmosphere, causing the water to freeze. But if there is no sea ice to start with, the polynya cannot form and the whole process shuts down.

Sea ice in the Laptev Sea reached a record low in 2020, with no new ice through October, later than any previous year in the satellite record. The exceptional summer heatwave across Siberia will have resulted in heat accumulating in the adjacent ocean, which is now delaying the regrowth of sea ice.

In the 1980s, there was as much as 230,000 square miles (600,000 square km) of multi-year ice covering around 2/3 of the Laptev Sea. In 2020, it has been ice-free for months with no multi-year ice left at all. The whole Arctic Ocean is heading for ice-free conditions in the future, defined as less than one million square km (390,000 sq miles) of ice cover. That’s down from about 3 million square miles (8 million square km) just 40 years ago. This year’s new record delay in ice formation in the Laptev Sea takes it a step closer.

A rapidly changing Arctic is a global cause for concern. Thawing permafrost releases methane, a greenhouse gas that is about 84 times more potent than CO2 when measured over 20 years.

Meanwhile, the Greenland Ice Sheet, the largest ice mass in the Northern Hemisphere, is currently contributing more to sea levels rising than any other source, and has enough ice in it to raise global sea level by 24.2 feet (7.4 meters). And if the machinations of a warming Arctic still seem remote, evidence suggests that even the weather across much of the Northern Hemisphere is heavily influenced by what happens in the rapidly changing roof of the world.

Botton line: Why the freezing of Arctic winter sea ice has stalled in 2020.