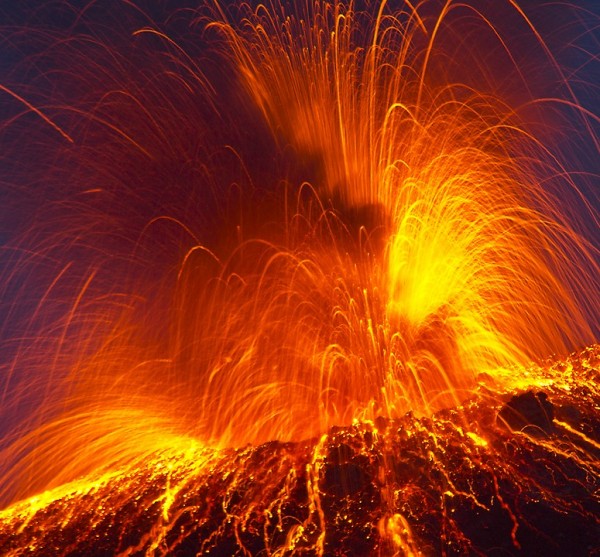 A supervolcano is classed as more than 500 cubic kilometers of erupted magma volume.

A new study suggests that supervolcanoes – massive eruptions with potential global consequences – don’t to follow the conventional volcano mechanics of internal pressure building until the volcano blows. Instead, the study finds, such massive magma chambers might erupt when the roof above them cracks or collapses.

Study leader Patricia Gregg, a professor of geology at the University of Illinois, presented the findings at the annual meeting of the Geological Society of America (November 1-4, 2015) in Baltimore, Maryland. Gregg said:

It’s very likely that supereruptions must be triggered by an external mechanism and not an internal mechanism, which makes them very different from the typical, smaller volcanoes that we monitor.

If we want to monitor supervolcanoes to determine if one is progressing toward eruption, we need better understanding of what triggers a supereruption.

A typical volcano, when it erupts, can have lasting impacts across the globe. We’ve seen that in Iceland when we’ve had large ash eruptions that have completely disrupted air traffic across Europe. A supereruption takes that to the nth degree.

Knowledge of triggering mechanisms is crucial for monitoring supervolcano systems, including the one that lies beneath Yellowstone National Park. The last known eruption of a supervolcano on Earth occurred at Lake Taupo in New Zealand 26,500 years ago.

The new study’s findings are contrary to papers published last year that link eruption likelihood and magma buoyancy. The ‘magma byouancy’ hypothesis suggested that magma – liquid rock – may be less dense than the rock surrounding it and therefore could push up against the roof, like an ice cube bobbing in water, increasing the pressure within the chamber and triggering an eruption. Gregg said:

Typically, when we think about how a volcanic eruption is triggered, we are taught that the pressure in the magma chamber increases until it causes an explosion and the volcano erupts. This is the prevailing hypothesis for how eruptions are triggered. At supervolcanic sites, however, we don’t see a lot of evidence for pressurization. When I incorporated buoyancy into my numerical models, I couldn’t reproduce the 2014 studies.

The new study found that the size of the magma chamber – the an underground cavity below the volcano that contains liquid rock – is a much greater factor in generating supervolcanic eruptions. The buoyancy studies suggested that this correlation was due to having more material pushing up, but this study found that the size of the chamber affects the stability of the rock containing the chamber. Gregg said:

Previous studies have found that as a magma chamber expands, it pushes the roof up and forms faults. As these very large magma chambers grow, the roof above may become unstable and it becomes easier to trigger an eruption through faulting or failure within the rock.

According to the model, if a crack or fault in the roof penetrates the magma chamber, the magma uses the crack as a vent to shoot to the surface. This could trigger a chain reaction that “unzips” the whole supervolcano.

The study was published in the Journal of Volcanology and Geothermal Research in October 2015.

Bottom line: A study published in the Journal of Volcanology and Geothermal Research in October 2015A suggests that supervolcanoes are likely triggered externally when the rock around them cracks or collapses.