Cloud streets are a manifestation of Earth’s atmosphere in motion. They’re normally seen by satellites looking down on Earth, but sometimes they can be seen from the ground as well. See cool images here! 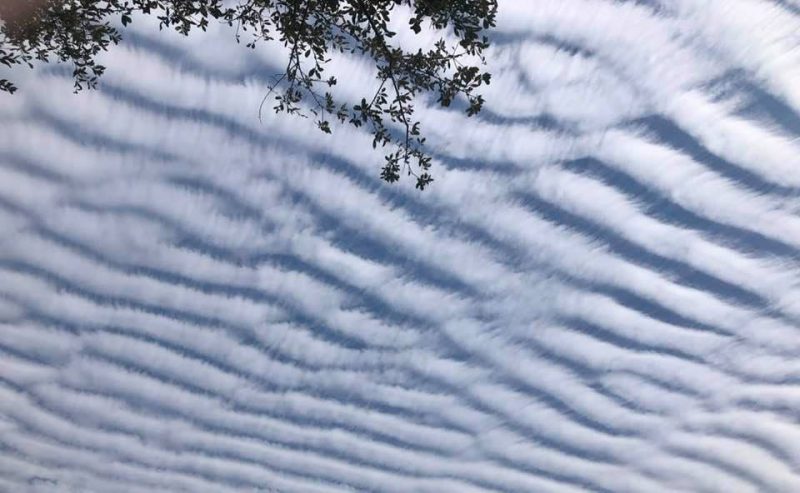 When long rows of cumulus clouds are oriented parallel to the direction of the wind, these are called cloud streets. We rarely see them in photos taken from the ground, as in the photo above. Instead they’ve been seen most often over the past few decades in satellite photos. You can recognize cloud streets as long rows of puffy cumulus or cumulus-type clouds. They are most often straight, but might form patterns when the wind driving the clouds hits an obstacle.

Cloud streets are formed by what are called convection rolls of rising warm air and sinking cool air. Rising warm air cools gradually as it ascends into the atmosphere. When moisture in the warm air mass cools and condenses, it forms clouds.

Meanwhile, sinking cool air on either side of the cloud formation zone creates a cloud-free area. When several of these alternating rising and sinking air masses align with the wind, cloud streets develop.

Convection rolls and the formation of cloud streets. Image via NOAA. 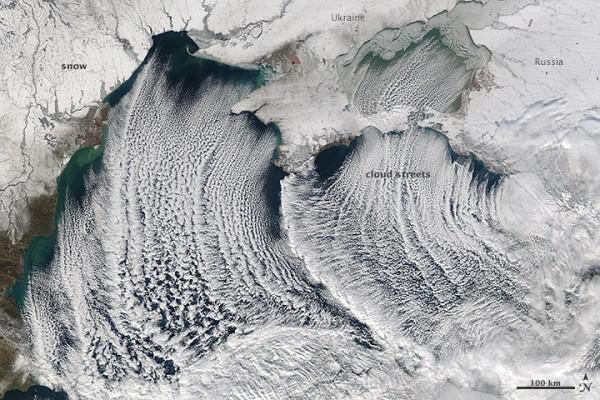 The MODIS instrument on NASA’s Aqua satellite captured this image of cloud streets over the Black Sea on January 8, 2015. Image via NASA Earth Observatory/ Jeff Schmaltz. Read more about this image.

NASA has taken some amazing photographs of cloud streets over the past few years with the MODIS (Moderate Resolution Imaging Spectroradiometer) instruments on board the Terra and Aqua satellites. The satellite images on this page are from these instruments.

Cloud streets typically form fairly straight lines over large flat areas such as the ocean. When geological features like islands disrupt the flow of the wind, this disruption can create spiral patterns in the cloud streets similar to the way in which large boulders create downstream eddies in rivers. The spiral patterns in clouds, called von Karman vortex streets, were named after Theodore von Kármán, a co-founder of NASA’s Jet Propulsion Laboratory. He was one of the first scientists to describe this type of atmospheric phenomenon.

Meteorological phenomena such as cloud streets and von Karman vortices are a manifestation of Earth’s atmosphere in motion. 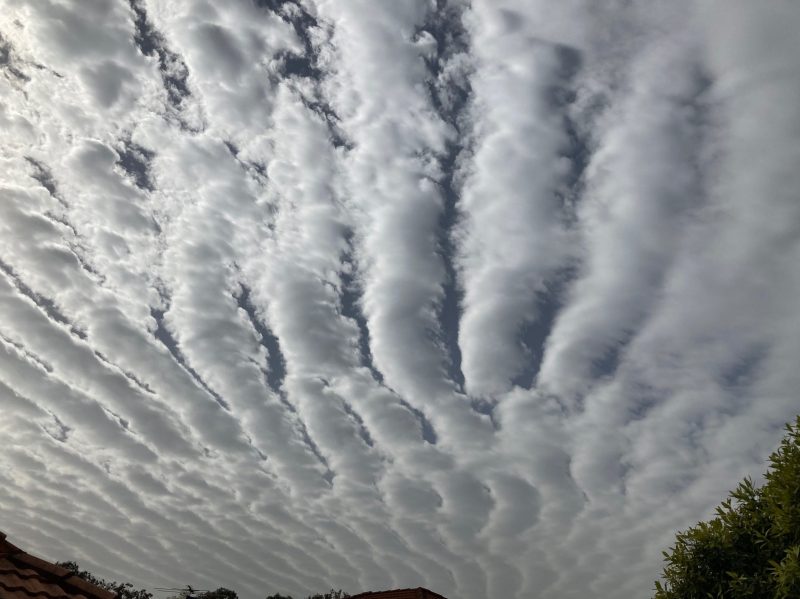 View at EarthSky Community Photos. | Michael Padbury in Wellington Point, Australia, captured this image with his iPhone on August 22, 2020. He wrote: “My daughter Hannah pointed out how unusual and beautiful these clouds were last Saturday morning … Not sure what you would call them.” Cloud arrays of this type are called cloud streets. They’re most often captured by satellites, because they tend to form over the ocean. But sometimes – as this photo shows – people see them from the ground, too. Awesome catch, Michael. Thank you, Hannah, too. 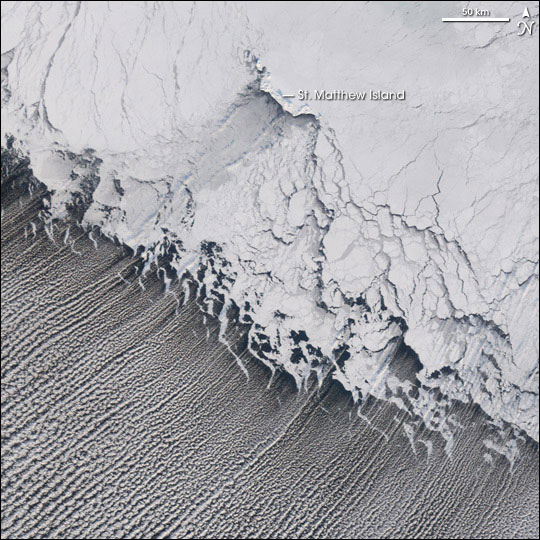 The MODIS instrument on NASA’s Terra satellite captured these cloud streets over the Bering Sea on January 20, 2006. Image via Jesse Allen/ NASA. Read more about this image. 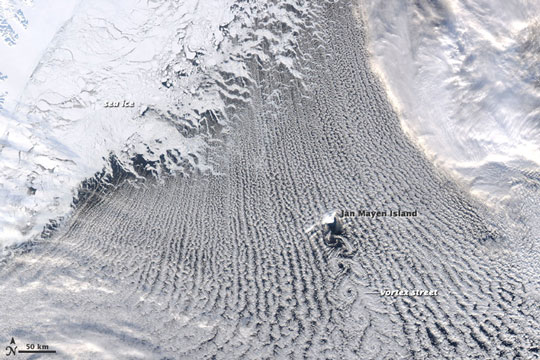 The MODIS instrument on NASA’s Aqua satellite acquired this image of a von Karman vortex that formed off the coast of Greenland on February 24, 2009. Image via NASA/ Jeff Schmaltz/ MODIS Rapid Response Team. Read more about this image. 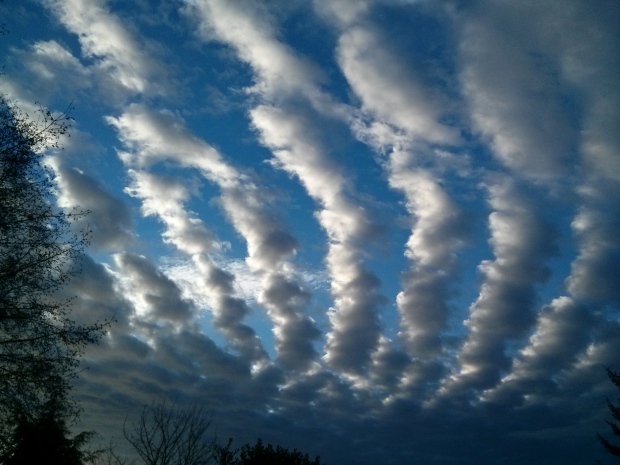 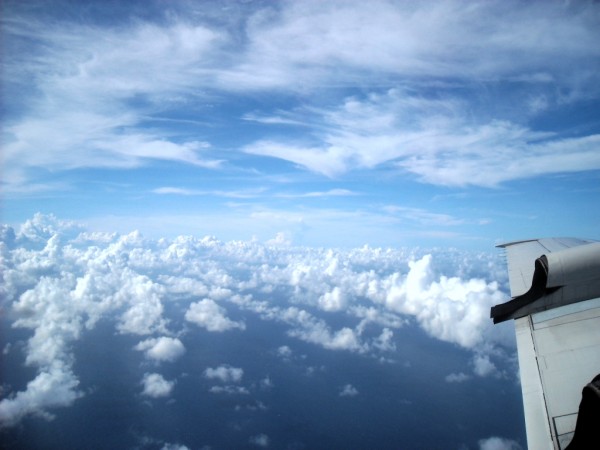 Bottom line: Cloud streets are an atmospheric phenomenon, consisting of long rows of cumulus clouds oriented parallel to the direction of the wind. Photos of cloud streets here.