The green plumes shown in these satellite images is the worst algae bloom Lake Erie has experienced in decades.

The green plumes shown in these images is the worst algae bloom North America’s Lake Erie has experienced in decades. The bloom is primarily microcystis aeruginosa, an algae that is toxic to mammals, according to the Great Lakes Environmental Research Laboratory. These images were acquired by the The Landsat-5 satellite in early October, 2011. The reasons for this year’s giant bloom are complex, say scientists, but might be related to a rainy spring and invasive mussels. 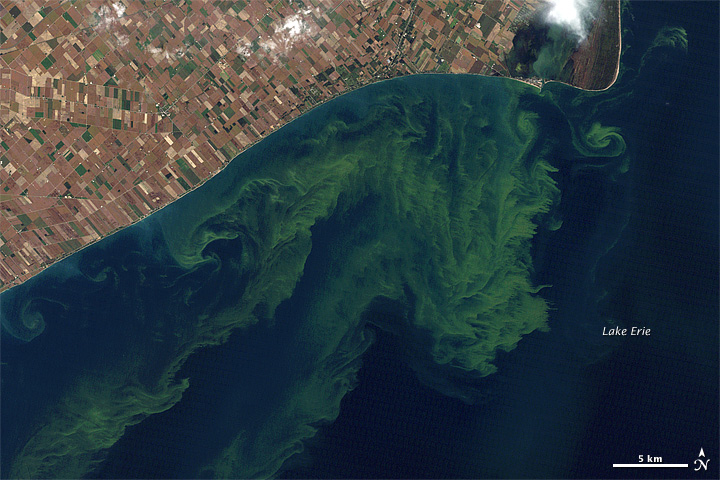 The Landsat-5 satellite acquired the top image on October 5, 2011. Vibrant green filaments extend out from the northern shore. Several days of calm winds and warm temperatures allowed the algae to gather on the surface. The bloom intensified after October 5, and by October 9—when the Moderate Resolution Imaging Spectroradiometer (MODIS) on the Aqua satellite acquired the lower image—the bloom covered much of the western basin.

Algae blooms were common in the lake’s shallow western basin in the 1950s and 60s. Phosphorus from farms, sewage, and industry fertilized the waters so that huge algae blooms developed year after year. The blooms subsided a bit starting in the 1970s, when regulations and improvements in agriculture and sewage treatment limited the amount of phosphorus that reached the lake.

This is considered the worst bloom in decades, and may have been influenced by the wet spring. Heavy snow fell in the winter and spring, followed by record-setting rainfall in parts of the Lake Erie watershed in April. The rain and melting snow ran off fields, yards, and paved surfaces, carrying an array of pollutants into streams and rivers—including phosphorus from fertilizers. More rain and runoff resulted in more phosphorus, and as in earlier decades, that nutrient nourished the algae in the lake.

But the rainy spring may not be the whole story, says Colleen Mouw, a researcher at the University of Wisconsin-Madison. Lake Erie has been invaded by zebra- and quagga mussels, carried into the lake in the ballast of ships. The mussels are bottom feeders, and they do a good job cleaning the water. They remove so many particles that Lake Erie is very clear in the spring and early summer. But zebra and quagga mussels don’t like microcystis. Mouw said:

They selectively feed on other phytoplankton species, removing competitors so microcystis can thrive.

As the mussels digest, they release phosphate and ammonia into the water, and these nutrients give microcystis an additional boost. When microcystis blooms develop, they create a green scum on the surface of the water that is visible from space.

Though not directly toxic to fish, the bloom isn’t good for marine life. After the algae dies, bacteria break it down. The decay process consumes oxygen, so the decay of a large bloom can leave “dead zones,” low oxygen areas where fish can’t survive. If ingested, the algae can cause flu-like symptoms in people and death in pets. The bloom is one of the issues being discussed at Great Lakes Week, a meeting of government representatives from the United States and Canada being held October 11-14 in Detroit, Michigan.

Bottom line: In early October, 2011, NASA’s Landsat satellite captured images of the worst algae bloom Lake Erie has experienced in decades. The bloom is primarily microcystis aeruginosa, an algae that is toxic to mammals. The reasons for this year’s giant bloom might be related to a rainy spring and invasive mussels.