Significant amounts of smoke from the wildfires in Siberia arrived in British Columbia in Canada this week, according to CBC News.

Russian firefighters have been battling wildfires for months. More than 30 wildfires were burning today (July 10, 2012) in far eastern Russia, according to NASA. Greenpeace says more land in Russia has already burned in 2012 than in 2010, a year that intense wildfires affected western Russia. Here’s an image from NASA’s Terra satellite, of wildfires burning yesterday. 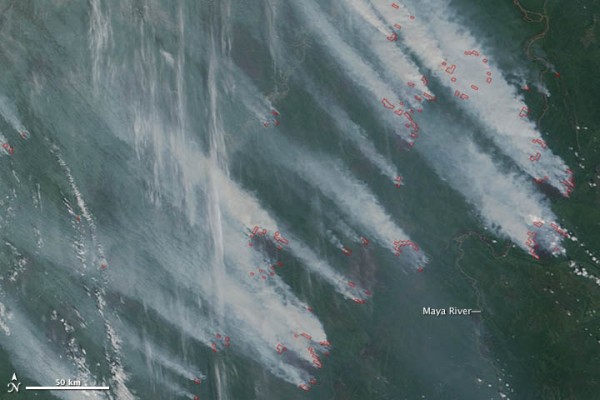 Smoke from large wildfires in Siberia is often lofted high enough into the atmosphere that winds push plumes of it across the Pacific Ocean to North America, NASA says. Significant amounts of smoke arrived in British Columbia in Canada this week, according to CBC News.

Day of mourning in Russia after floods kill at least 171

View from space: Wildfires in Colorado and Russia