Typhoon Vongfong will push into Okinawa later today (October 10, 2014) as a Category 2 or 3 storm with winds greater than 100 mph.

Last year, Super Typhoon Haiyan came in as 2013’s strongest storm. Haiyan was was arguably the strongest storm in several decades. Earlier this week, Typhoon Vongfong became the strongest storm to form across the globe for 2014. The typhoon became a super typhoon with sustained winds of 180 miles per hour (mph) or 290 kilometers per hour (kph). Vongfong will gradually weaken over the next several days. Unfortunately, it will travel near Okinawa and push over mainland Japan this weekend (October 10-13, 2014) as it pushes off to the northeast. Vongfong will bring with it strong winds, heavy rain and storm surge across the area.

Earlier this week, Vongfong rapidly intensified into a Category 5 storm with winds greater than 155 mph. It had a 50 mile diameter eye, which was very circular and well defined. Pressure levels likely decreased well below 915 millibars, making it the globe’s strongest storm of 2014.

If you compare the infrared satellite structure of this storm compared to Super Haiyan at its peak in strength from 2013, you will see that Haiyan was far greater in intensity. Of course, it does not matter which storm was stronger. Both of them at their peak strength were monsters. Fortunately, Vongfong will weaken as it pushes to the north and encounters cooler ocean waters and less favorable atmospheric conditions. 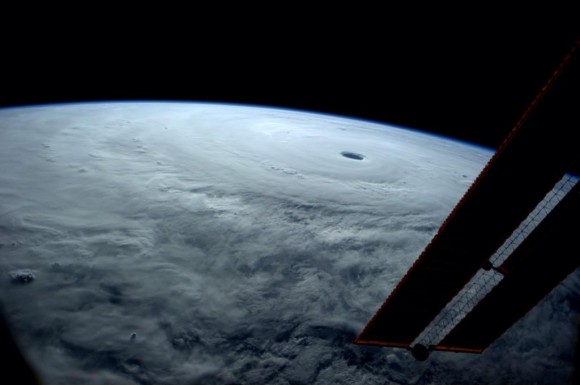 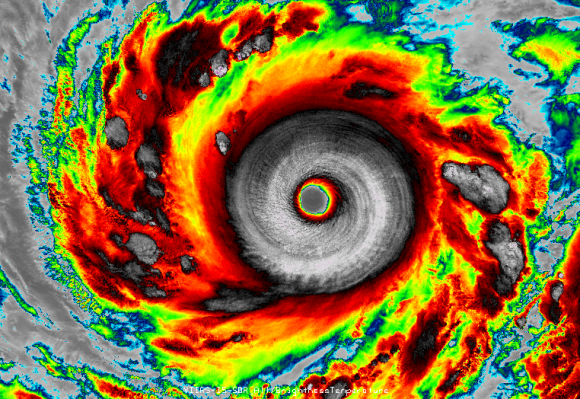 Over the past couple of days, Vongfong’s track to the north has shifted to the west, putting Okinawa in the path of the storm. Vongfong could still be a strong Category 2 or 3 storm as it pushes towards Okinawa later today. By the weekend, Vongfong will push over mainland Japan as a weaker storm, most likely a strong tropical storm or Category One storm. It will produce heavy rain, some flooding, and nasty rip currents along the ocean.

It will continue to push out into the open Pacific through next week and possibly become an extratropical low as it pushes into Alaska. Vongfong will be the second storm in the past week to affect Japan. The last storm, Typhoon Phanfone, skimmed the eastern coast of Japan last week. 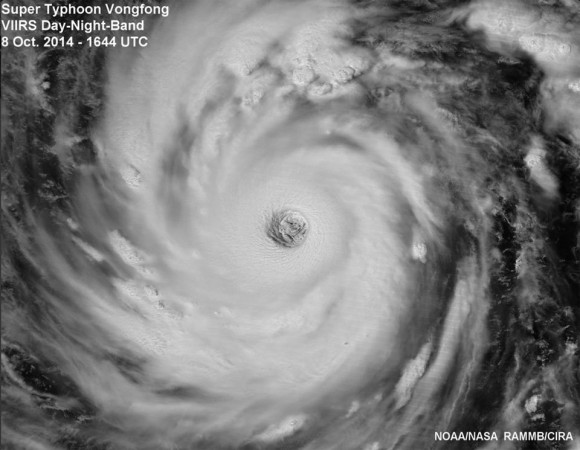 Visible VIIRS image of Super Typhoon Vongfong in moonlight as seen at 2:44 pm EDT on October 8, 2014. Image via NOAA

Bottom line: Vongfong became the globe’s strongest storm of 2014 with sustained winds of 180 mph. It has now weakened and is no longer a Super Typhoon, but it will impact Okinawa and mainland Japan this weekend as it pushes off to the north and northeast. It will produce heavy rain, some flooding, and strong waves. Fortunately, it will gradually weaken over the next couple of days. It could remain a Category One storm as it pushes into mainland Japan Sunday and Monday.