Typhoon Utor is the strongest tropical cyclone to form so far across the globe for 2013. The storm is pushing into southeast China today.

Typhoon Utor struck the Philippines as a Category 3 storm early Monday morning (August 12, 2013), leaving behind at least two dead. Today (August 13), the storm is pushing into China’s southern coastline and is expected to make landfall 150 miles southwest of Hong Kong around 08 UTC (4 a.m. EDT). Southeast China can expect heavy rain, flash flooding, potential mudslides, and gusty winds. China has been plagued with drought, flooding, and a major heat wave this past year, and Utor is expected to create more weather-related problems. At this writing (August 13 at 4 p.m. EDT or 20 UTC), Utor is a Category 2 storm with sustained wind speeds around 90 knots, or 105 miles per hour. As it pushes ashore, the storm is expected to produce at least 3 to 6 inches of rain across southeast China and into parts of Vietnam. Typhoon Utor is the strongest tropical cyclone to form so far across the globe for 2013.

Typhoon Utor is currently fighting some dry air as it continues to push to the northwest. There is an apparent eye with the typhoon, but the dry air is starting to make the eye wall collapse on the northern side of the system. The main threat with this typhoon will continue to be the heavy rains that could trigger flash flooding and mudslides. 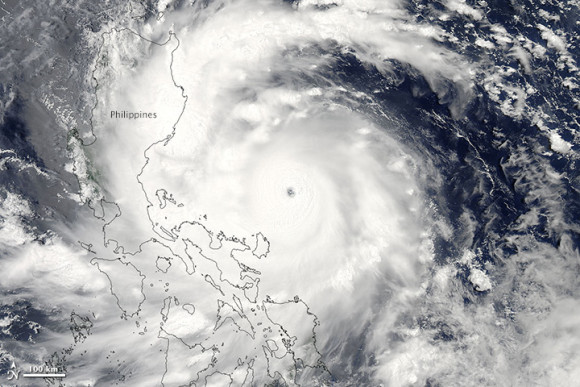 On August 11, Utor was a super typhoon producing sustained maximum wind speeds of 150 mph. The storm was at its peak intensity, and is currently ranked as the strongest typhoon to have formed across the globe so far for 2013. Utor struck the northern Philippine island of Luzon early Monday morning, producing heavy rain, significant storm surge and sustained winds around 140 mph. It is estimated by the Republic of the Philippines that Utor made landfall near Casiguran. So far, the agency is reporting at least two deaths. There have been as many as 55 people that have been reported missing after Utor struck the region. Over one hundred homes were totally damaged and nearly 1,000 more sustained some type of damage. 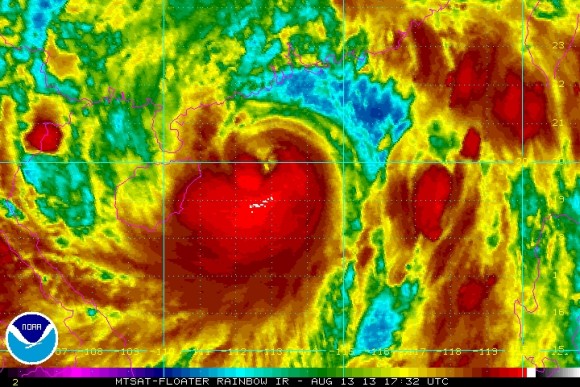 Bottom line: Typhoon Utor is pushing into southeast China today (August 13, 2013), with plenty of rain, gusty winds and expected flash flooding. This storm has already killed at least two people and damaged over 1,000 homes in the Philippines. Rainfall totals over six inches will be possible in a few spots as the storm is rather large and contains plenty of moisture. Typhoon Utor is considered to be the strongest tropical cyclone to have formed across the globe for 2013.