Typhoon Soulik is hitting parts of Taiwan today. It’ll continue to push northwest and affect parts of China’s provinces of Fujian and Zhejiang on Saturday. 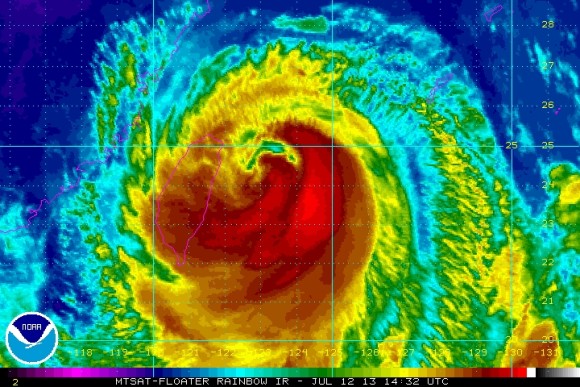 Typhoon Soulik, a strong tropical cyclone located in the Western Pacific Ocean, is pushing to the west-northwest into Taiwan. Soulik was a very intense typhoon earlier this week, when it had sustained winds greater than 140 miles per hour, or (~60 meters per second). Today ((July 12, 2013), Soulik is battering Taiwan with sustained winds near 90 mph (80 knots) with gusts as high as 130 mph. Heavy rain and flooding is possible across the region as Soulik pushes to the west. Soulik will impact parts of China’s provinces of Fujian and Zhejiang and affect the cities of Fuzhou and Pingtan on Saturday.

Radar loop of Soulik as it intensified into a Super Typhoon on July 10, 2013. Image via NOAA

Typhoon Soulik is currently hitting Taiwan. A 132 mph wind gust was reported in Ishigakijima earlier today (July 12). The storm is moving to the northwest at 12 knots (20 km/h), and has a pressure around 950 millibars (hPa). The storm is expected to push into China by Saturday and produced heavy rains and sustained winds around Category 1 hurricane strength near 75-80 mph (65 knots). Flooding and storm surge is the primary concern along the coast of China. Heavy rains have already hit parts of China, particularly in the southwestern province of Sichuan where at least 30 people have died and nearly 150 people missing due to heavy rain and flooding. Adding a typhoon into the mix will only cause major disruptions for eastern China as Soulik continues to push to the northwest. 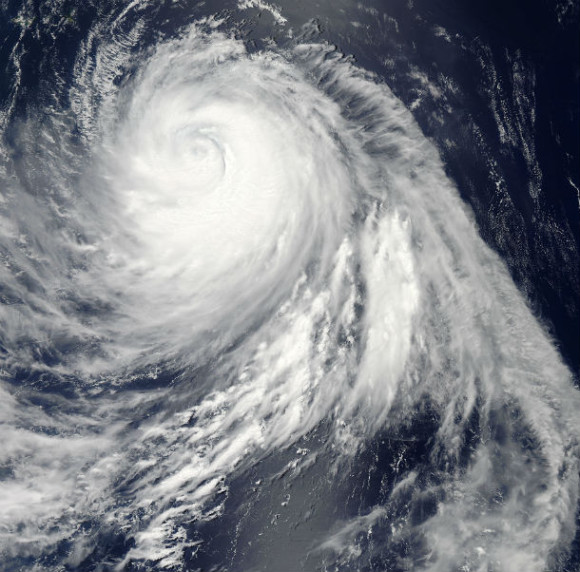 MODIS Aqua satellite flew over Typhoon Soulik in the western Pacific Ocean on July 11 at 04:20 UTC and saw that the system is undergoing eyewall replacement. Image via NASA Goddard/ MODIS Rapid Response Team.

Radar loop of Soulik as it intensified into a Super Typhoon on July 10, 2013. Image Credit: NOAA 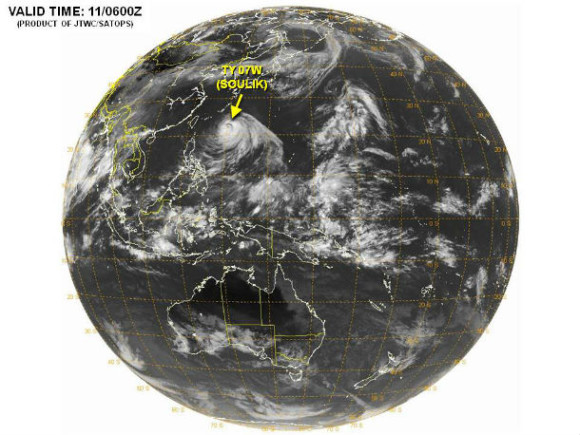 Bottom line: Typhoon Soulik is producing sustained winds of 90 mph and is already hitting parts of Taiwan today. The storm will continue to push to the northwest and affect parts of China’s provinces of Fujian and Zhejiang on Saturday. The biggest threats with this storm is heavy rain and flooding. Everyone in these areas should be ready as Soulik pushes ashore within the next 24 hours.