Arthur has become the first named Atlantic hurricane of the 2014 season. 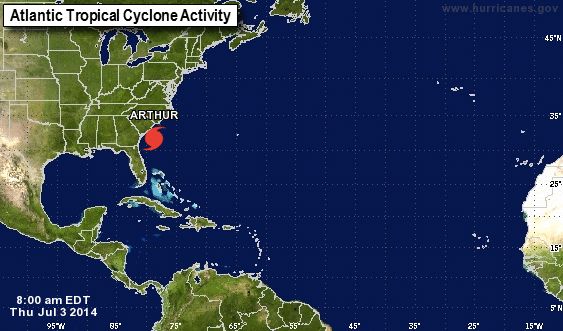 Arthur was upgraded to a hurricane early on July 3 and is forecast to move past the North Carolina Outer Banks tonight. Hurricane Watches and Warnings, along with Tropical Storm Watches and Warnings, remain in effect from New Jersey to South Carolina. In addition to coastal flooding, dangerous rip currents will impact much of the U.S. East Coast through this weekend due to Hurricane Arthur. Image via National Weather Service.

UPDATE JULY 3, 2014 1300 UTC (8 A.M.) Tropical Storm Arthur became the first hurricane of the 2014 Atlantic season earlier today. Along the U.S. East Coast, there have been evacuations, beach and tourist site closings. July 4 celebrations some along parts of the U.S. East Coast are likely not to happen.

It was moving at 9 miles per hour (15 kph) in a northerly direction toward the coast and is expected to turn toward the northeast with an increase in speed on Thursday.

Arthur is expected to create a large rip current threat across the U.S. East Coast this weekend. What to do if you get caught in a rip current 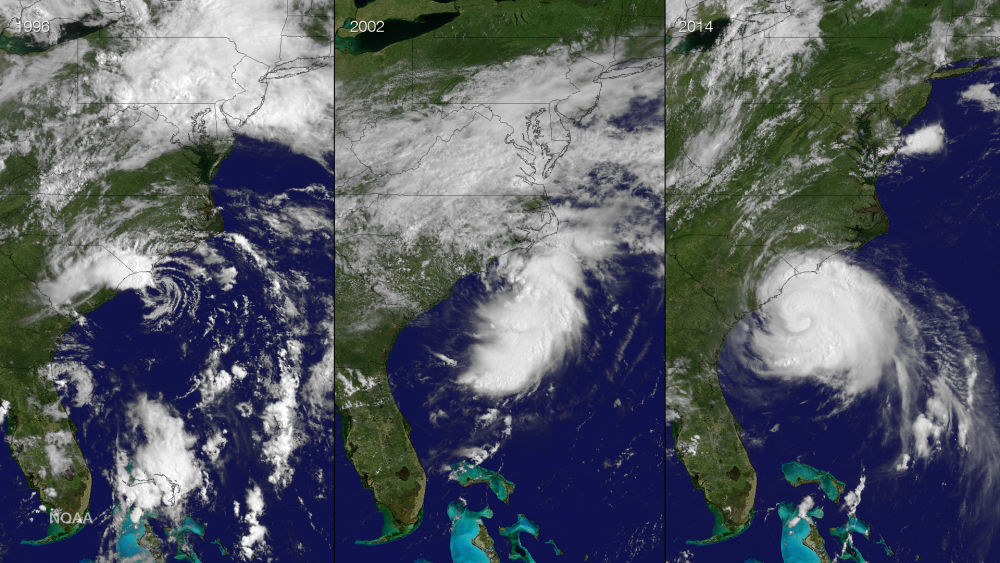 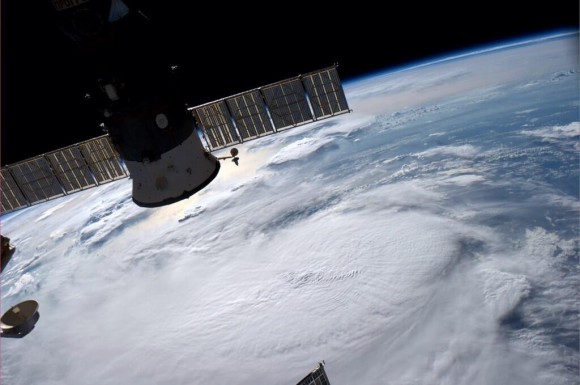 Tropical Storm Arthur as a depression from the International Space Station. Image via Reid Wiseman (@astro_reid)

ORIGINALLY POSTED JULY 2, 2014 AT 1300 UTC (8 A.M. CDT)It has been a full month since the 2014 Atlantic Hurricane Season started, and we now officially have the first named storm of the season. Tropical Storm Arthur is a strong tropical storm with 60-mile-per-hour sustained winds. Arthur originated as an area of low pressure that moved offshore of South Carolina and drifted to the south towards the east coast of Florida. Over the past three days, the low was able to gain tropical characteristics and was designated as a tropical depression. It is predicted to be a hurricane by tomorrow. Currently (July 2, 2014 at 12:30 UTC, or 7:30 a.m. CDT), Arthur is slowly spinning away off the east coast of Florida. It is likely to move along the U.S. East Coast this week and cause major rip currents. If you have beach plans around the Mid-Atlantic or Northeast on Thursday or Friday, you might want to reconsider as conditions will likely deteriorate with nasty waves, rain, and gusty winds. If anything else, rip currents are likely to be the biggest issue.

Tropical Storm Watches have been issued for the east coast of Florida from Sebastian Inlet to Flagler Beach. Additional tropical storm watches have been issued in South Carolina from South Santee River to just south of Bogue Inlet in North Carolina. Finally, a tropical storm watch is also out north of Oregon Inlet to the North Carolina/Virginia border. Meanwhile, a hurricane watch was issued this morning for Bogue Inlet to Oregon Inlet in North Carolina. These areas will likely receive the most wind and rain on Thursday as the storm pushes off to the north and east. 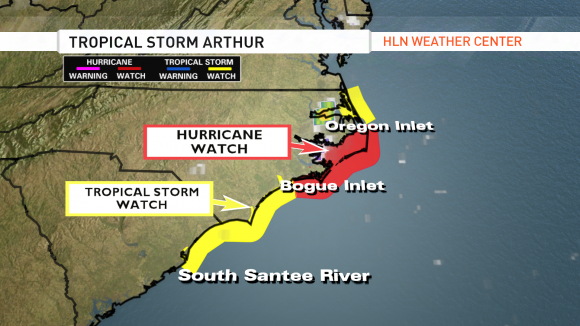 Watches across the South Carolina and North Carolina coastline. Image via CNN/HLN Weather 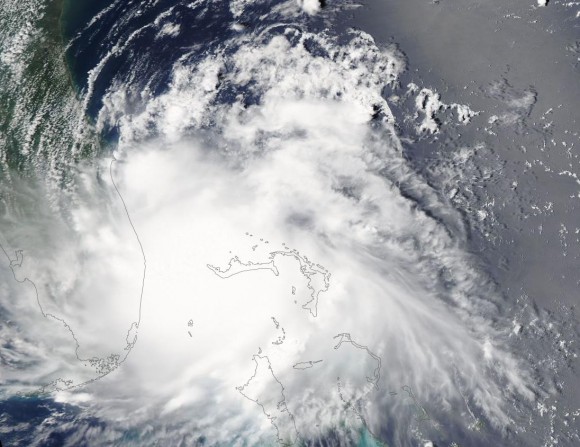 Arthur is currently in a favorable position to intensify over the next 48 hours. Wind shear is fairly light, and the atmosphere is moistening up around the system. With little shear and more moisture in the place, Arthur’s chances of intensifying looks to be greater. The National Hurricane Center is forecasting Arthur to be a strong Category 1 storm with 85-90 mph winds as it near Hatteras, North Carolina. The storm will not directly hit the Northeast, but it will combine with an approaching cold front that will help sweep it away from the United States. The interaction of the front and the tropical system will help produce rainfall totals of 1-3″ across the Mid-Atlantic and Northeast through Saturday. 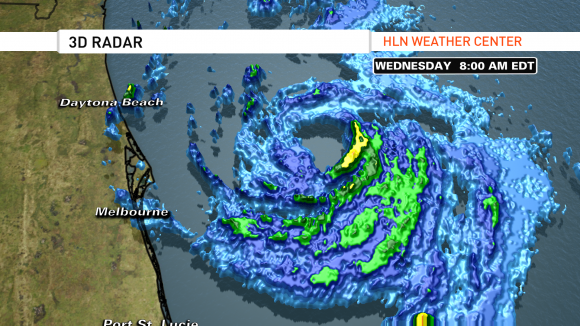 3D radar imagery around 8am EDT on July 2, 2014 showing that an eye is trying to form. Image via CNN/HLN Weather (Judson Jones)

The most likely areas to see the nastiest conditions from Arthur will be along the outer banks of North Carolina. Hatteras looks like the area that could get very close to the center of the system as it pushes off to the northeast. Storm surge of 3-5 feet is possible with gusts as high as 80-100 mph. Intensity forecasts are still tricky, so the storm could be weaker or slightly stronger than what the National Hurricane Center is predicting. Since it is following the East Coast, it will be traveling through the Gulf Stream. The Gulf Stream can help intensify the storm as it taps the very warm waters from the current. With that in mind, do not underestimate this storm. Everyone should avoid the waters through Saturday as the rip current threat will be very high.

Bottom line: Tropical Storm Arthur continues to become better organized and is predicted to become a hurricane by Thursday. For now, the forecast is for Arthur to “tease” the East Coast and will likely avoid making a direct landfall. The area most likely to see the greatest affects from this storm will be off the coast of North Carolina near Hatteras. The storm is expected to be out of the area by Sunday morning as it rapidly loses tropical characteristics and travels into the Northern Atlantic Ocean. If you have beach plans along the U.S. East Coast for Independence Day, you might want to reconsider. If anything, else, rip currents will be the biggest issue. If you find yourself stuck in a rip current, always remember to swim parallel to the shore.