Tiny crustaceans that graze on nuisance algae play an important role in protecting seagrass beds, according to a new study.

Tiny crustaceans that graze on nuisance algae play an important role in protecting seagrass beds, according to a new study published in the journal Ecology. 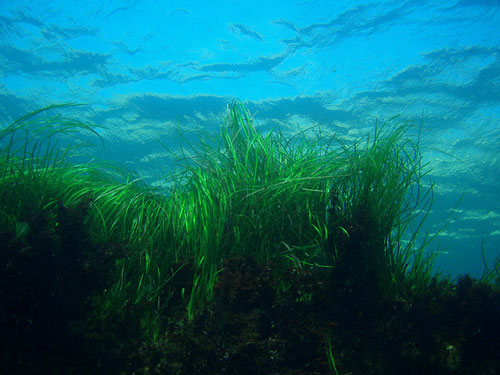 Seagrass beds are declining around the world due to damage from boat propellers and trawl nets and from the overgrowth of nuisance algae that is fueled by excessive nutrient runoff from sources such as fertilizers and sewage.

Scientists from the Virginia Institute of Marine Science and the U.S. Geological Survey conducted an experiment to investigate what role grazers play in maintaining the health of seagrass beds. Grazers include crustaceans such as amphipods, crabs and shrimp that feed on the nuisance algae. 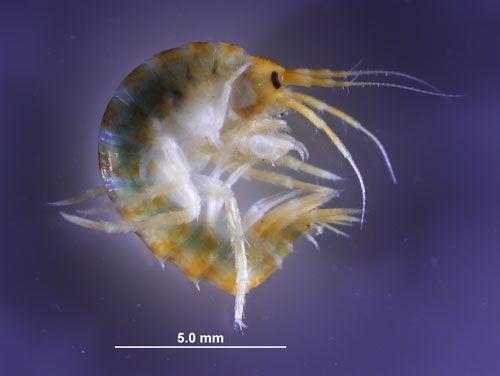 The scientists found that when tiny crustaceans were excluded from seagrass beds, nuisance algae growth was higher. The growth of nuisance algae on blades of seagrasses can harm the beds by blocking sunlight and preventing photosynthesis.

Matthew Whalen, lead author of the study and a PhD candidate at the University of California at Davis, commented on the findings in a news release. He said:

Inconspicuous creatures often play big roles in supporting productive ecosystems. Think of how vital honeybees are for pollinating tree crops or what our soils would look like if we did not have earthworms. In seagrass systems, tiny grazers promote healthy seagrasses by ensuring algae is quickly consumed rather than overgrowing the seagrass.

Matthew was a graduate student at the Virginia Institute of Marine Science when he conducted the research. 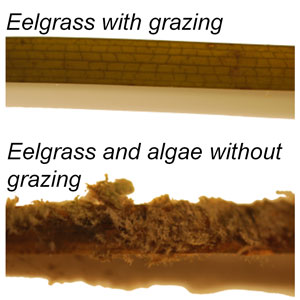 James Grace, a scientist from the U.S. Geological Survey and co-author of the study, also commented on the findings in the news release. He said:

Not only do these areas serve as nurseries for commercially important fish and shellfish, such as blue crabs, red drum, and some Pacific rockfish, but they also help clean our water and buffer our coastal communities by providing shoreline protection from storms. These tiny animals, by going about their daily business of grazing, are integral to keeping healthy seagrass beds healthy.

Another co-author of the study was J. Emmett Duffy from the Virginia Institute of Marine Science. The research was funded in part by the National Science Foundation and it was published in the February 2013 issue of the journal Ecology. The research was part of larger global effort by scientists from eight countries—Canada, Finland, Japan, the Netherlands, Norway, Portugal, Sweden and the USA—to understand how changes in biodiversity and climate are affecting the health of seagrass beds worldwide.

Bottom line: According to a new study published in the February 2013 issue of the journal Ecology, tiny crustaceans that graze on nuisance algae play an important role in protecting seagrass beds.