Sharks may be visiting an open area of the Pacific Ocean known as the White Shark Café. Scientists are trying to determine why.

Great white sharks congregate every spring in a deep area of the Pacific Ocean known as the white shark Café. Scientists are not sure what the sharks are doing while at the Café, but they believe that they are either foraging for food or mating. Now, a new analysis of behavioral data collected from tagged great white sharks suggests that some sharks may be visiting the Café to participate in a lek-like mating system. The research was published on October 29, 2012 in the journal PLoS One.

Leks are assembly areas where animals congregate to carry out complex courtship behaviors. Typically, males will gather together in an area to engage in endurance rivalry and females will visit the lek with the purpose of finding a mate. Leks are used for reproduction by many migratory species including birds, mammals, reptiles, insects and fish. Leks have not been observed in great white sharks before. In general, the mating system of white sharks remains somewhat of a mystery because these species are very difficult to observe in the vast expanse of the open ocean.

To better understand how great white sharks are using open ocean habitat, scientists attached pop-up archival transmitting (PAT) tags on numerous white sharks (Chacharodon carcharias) and tracked their behavior. The PAT tags record information on light, pressure and temperature. The tags are designed to eventually fall off the shark and float to the surface of the water where the stored data gets transmitted to satellite receivers. The data can then be used to reconstruct where the sharks had spent their time. 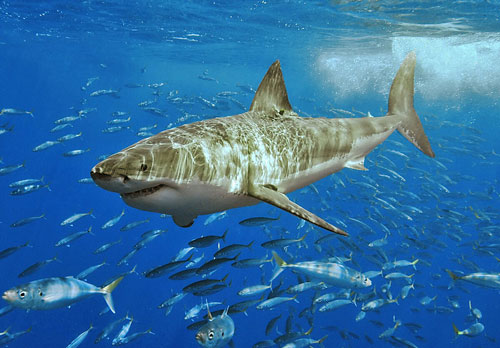 Through a statistical analysis of PAT tag data, scientists have discovered that great white sharks in the northeastern Pacific Ocean spend most of their time either hunting in shallow coastal waters, traveling across the ocean at shallow depths or diving in the deep waters of an area known as the white shark Café. The Café is located approximately halfway between the Baja peninsula in North America and the Hawaii islands.

While at the Café, great white sharks displayed two different types of behavioral patterns. During one type of behavior that the scientists called DVM, which stands for diel vertical migration, white sharks were observed diving to depths of 350 to 500 meters during the day and returning to shallower depths of roughly 250 meters during the night. The scientists believe that this type of behavior was associated with foraging. Many marine prey species rise to the surface of the ocean at night to feed on algae then, retreat to darker depths during the day to avoid being seen and eaten by predators. Sharks that engaged in DVM behavior were likely tracking those prey species.

The scientists also observed that white sharks engaged in a second type of behavior while at the Café. The scientists called this behavior ROD, which stands for rapid oscillatory diving. During ROD, white sharks were observed making repeated dives to depths of about 30 to 200 meters.

ROD behavior was the most common among male sharks during the months of  May, June and July. The scientists hypothesize that this type of behavior could be due to the formation of a lek-like mating system whereby the male sharks might be diving to either search for female pheromones in the water or to challenge each other in an endurance competition. In the future, the scientists hope to test their hypothesis by capturing images of sharks at depth with miniature cameras. 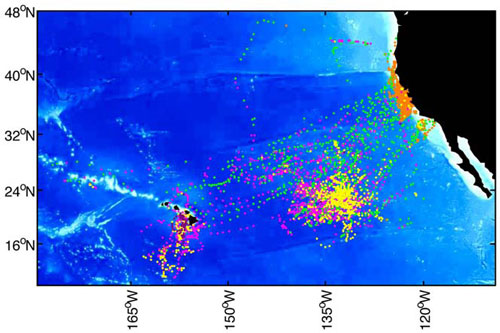 Location of white sharks in the northeastern Pacific Ocean. Image Credit: Salvador Jorgensen via PLoS One.

Salvador Jorgensen, lead author of the paper, is a research scientist at the Monterey Bay Aquarium. The Monterey Bay Aquarium Foundation and the Sloan, Moore and Packard Foundation provided funding for the research. The research was part of a larger scientific effort called the Tagging of Pacific Predators (TOPP) program, which is managed by the Census for Marine Life.

Bottom line: A new analysis of behavioral data collected from tagged great white sharks suggests that some sharks may be visiting an open area of the Pacific Ocean known as the White Shark Café to participate in a lek-like mating system. The research was published on October 29, 2012 in the journal PLoS One.

Juliet Eilperin on the hidden world of sharks