Posted by Deborah Byrd and Elizabeth Howell in Earth | Human World | May 8, 2014

Here’s why climbers use supplemental oxygen to climb Mount Everest. Also, the curtailment of the 2014 Everest climbing season following a deadly avalanche. 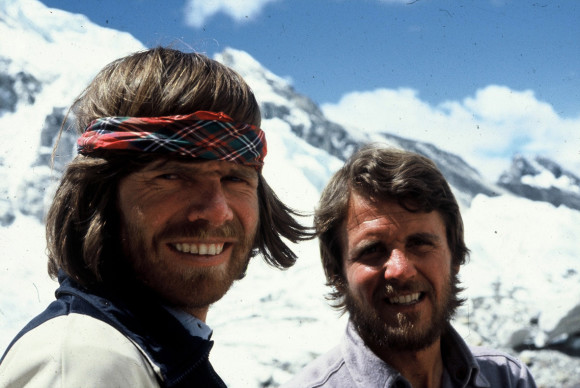 May 8, 1978. On this date, Reinhold Messner and Peter Habeler were the first to climb to the top of Mount Everest without supplemental oxygen.

Mount Everest is Earth’s highest mountain, with a peak at 8,848 meters (29,029 feet) above sea level. To climb Everest without supplementary oxygen means increased risk to the climber. Mount Everest near its summit can have weather extremes, deep cold and steep icy slopes. Quick, accurate decision-making may be needed. Without enough oxygen during the ascent, people cannot think clearly. At the summit itself, a person’s oxygen intake is less than one-third that at sea level.

Messner and Habeler’s first attempt at the summit without supplemental oxygen came on April 21, 1978. It went awry when, according to PBS, Habeler became violently ill from food poisoning at base camp from a can of sardines. Messner attempted the summit himself with two Sherpas, but was turned back by extreme weather.

Habeler and Messner tried again for the summit on May 6, 1978, but only after arguing over whether the exploit was worth it. They arrived safely on May 8, but they admitted the ascent without extra oxygen took almost everything out of them. Messner later described the experience this way:

Breathing becomes such a strenuous business that we scarcely have strength left to go on. Every ten or fifteen steps, we collapse into the snow to rest, then crawl on again. My mind seems almost to have ceased to function. I simply go on climbing automatically. The fact that we are on Everest, the highest mountain in the world, is forgotten – nor does it register that we are climbing without oxygen apparatus.

He described a “state of spiritual abstraction” at the summit, later writing:

I no longer belong to myself and to my eyesight.

I am nothing more than a single narrow gasping lung, floating over the mists and summits.

The two had built up experience before Everest by climbing several other tall mountains without oxygen: Matterhorn, Eigerwand and Gasherbrum. Though their exploits got concern from the medical community, they were determined to ascend the world’s tallest peak without oxygen. And they did. 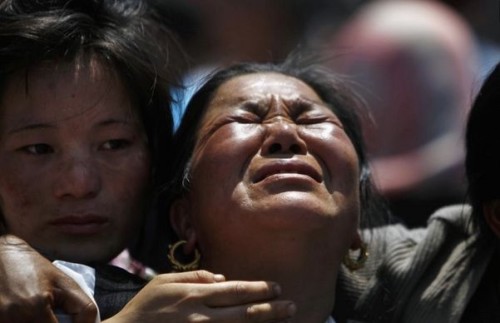 Photo by Niranjan Shrestha via newyorkdailynews.com

Mount Everest climbing season curtailed after deadly accident. In recent weeks of 2014, there has been an exodus of climbers from Mount Everest, after Sherpas refused to climb out of respect for 16 Nepalese guides who died in a deadly avalanche on April 18, 2014.

Throughout the history of climbing Everest, virtually everyone who reaches the summit does so with supplemental oxygen, and the practice of carrying extra oxygen has intensified in recent years as more people have adding climbing Mount Everest to their “bucket lists.” Virtually all westerners who ascend to the top of Everest use oxygen masks and tanks above 8,000 meters (26,000 feet). Some even use oxygenated tents. All of this gear is carried by Sherpas.

The video below shows the harrowing footage of the April 18 avalanche near Everest Base Camp, which killed 16 people. As of late April, three of bodies remain buried in ice and snow on the mountain.

Bottom line: May 8, 1978 marks the first ascent of Mount Everest without supplemental oxygen, a feat accomplished by Reinhold Messner and Peter Habeler.