Mountaineers began leaving Mt. Everest yesterday, as Sherpas refuse to climb again this year, out of respect for 16 who died in last week’s deadly avalanche.

Many mountaineers left behind their dream of climbing Mt. Everest yesterday (April 24), after Nepalese officials failed to break an impasse with anguished Sherpa guides who refuse to climb following last week’s deadly avalanche. April 18, 2014 is now the deadliest day in the history of Mount Everest. The April 18 avalanche knocked down at least 25 people who were climbing at an altitude of about 19,500 feet and killed 16 people, all of them employed as high-altitude climbing Sherpas. Now Sherpas do not wish to scale the mountain again this year out of respect for the 16 guides at least three of whom are still buried under the snow and ice. They also fear more avalanches. Read more about the failure to reach agreement at the L.A. Times.

Jon Krakauer at the NewYorker.com presents the best short account I’ve seen so far of ongoing emotional aftermath of the avalanche. Krakauer is author the best-selling book Into Thin Air about the 1996 Mount Everest disaster, in which eight of his own fellow climbers were killed.

He says climbing technologies have helped more people get to the top of Everest, but have increased risks for Sherpas. For example, he says:

Sherpas use neither of these aids, but they are required, for example, to carry the extra oxygen and to carry heavy packs multiples times through dangerous passes.

In the aftermath of the April 18 disaster, many Sherpas are understandably angry. Read Jon Krakauer’s article at NewYorker.com. 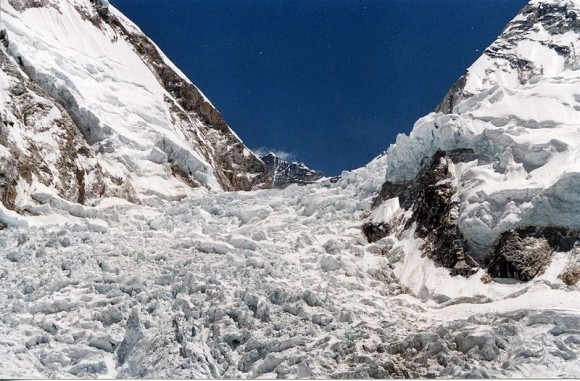 Khumbu Icefall in 2005 via Wikimedia Commons. The avalanche was caused by a serac – a block or column of glacial ice – that fell from an ice bulge on the west shoulder of Mount Everest (center left) above this icefall.

Bottom line: Mountaineers began leaving Mt. Everest yesterday (April 24, 2014) as Sherpas refuse to climb the mountain again this year, out of respect for the 16 who died in last week’s fearsome avalanche. April 18, 2014 is now the deadliest day in the history of Mt. Everest. This post talks about technologies that have enabled more people to climb Everest, while making things tougher for the Sherpas.