The race is on to sample an ancient Antarctic lake

British, Russian and American teams all are aiming to sample buried lakes in Antarctica. Now a British team has returned after successfully hauling its gear into place.

The British Antarctic Survey Press Office announced yesterday (January 15, 2012) that a team of four British engineers has returned home after a grueling yet successful journey to remote Antarctica, Earth’s southernmost continent, with the most hostile climate on our planet. The goal of the journey was to place equipment and supplies in place for drilling into Antarctica’s subglacial Lake Ellsworth in late 2012. This ancient lake is buried beneath two miles (three kilometers) of ice in Antarctica. Scientists say the lake has been isolated from the outside world for at least 125,000 years – maybe a million. British, Russian and American science teams are all trying to become the first to sample an ancient Antarctic lake. 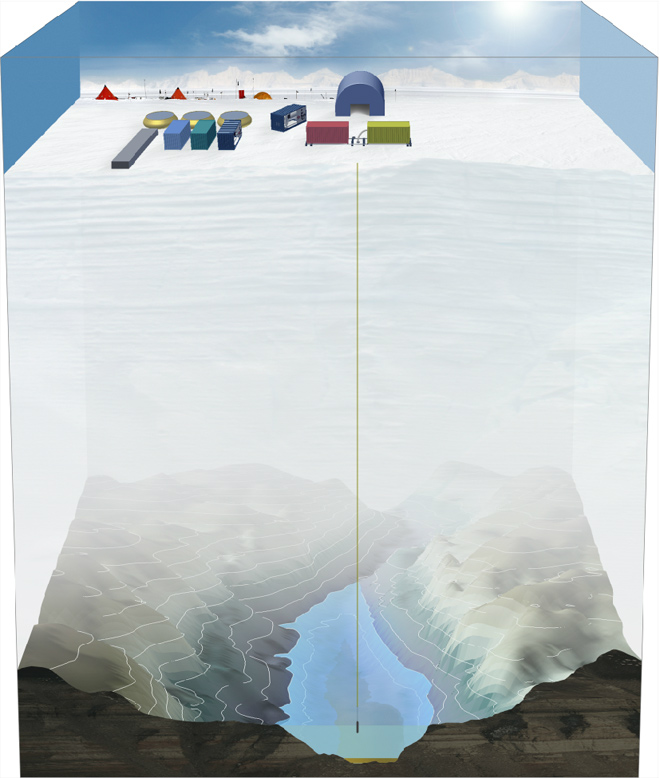 The British Subglacial Lake Ellsworth Advance Party – which, according to a press release, endured temperatures of minus 35°C – successfully used a powerful tractor-train to tow nearly 70 British tonnes (nearly 80 tons in U.S. measure) of equipment across Antarctica’s ice over deep snow and steep mountain passes.

The British plan is to use high-pressure hot water to melt through miles of ice to reach Lake Ellsworth. Through the bore hole drilled in the lake, the team will lower a titanium probe to measure and sample the water. They will also use a corer to extract sediment from the lake.

To date, no one has sampled any of some 400 subglacial lakes on the Antarctic continent. The British team hopes to be the first to retrieve a sample. Meanwhile, a Russian-led team is targeting the biggest subglacial lake in Antarctica – Lake Vostok – and a U.S. crew is preparing to investigate Lake Whillans.

British scientists say they have been planning for more than 15 years to access Lake Ellsworth. They say they believe the lake will yield new knowledge about the evolution of life on Earth and other planets. Lake-bed sediments could also provide vital clues about the Earth’s past climate. 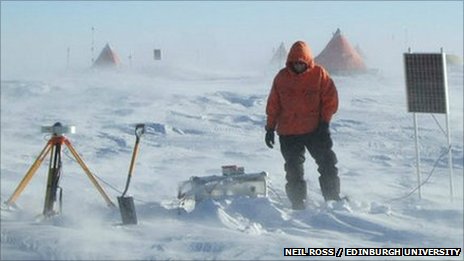 A researcher in Antarctica, a climate so hostile that it is sometimes said to be the place on Earth most like the surface of Mars.

The summer research season in Antarctica is now winding down. Temperatures there are so extreme that scientific research is mostly conducted in the months of November, December and January, which is the height of summer in the Southern Hemisphere. In December 2012 – when it’s summer once again in Antarctica – a British science and engineering team will make the 10,000-miles (16,000-km) journey from the UK to collect water and sediments from the buried Lake Ellsworth.

Bottom line: British, Russian and American science teams are all trying to become the first to sample an ancient Antarctic lake. These lakes are buried under miles of ice and have been isolated from the outside world for at least 125,000 years – maybe a million years. On January 15, 2012, the British Antarctic Survey Press Office announced that a team of four engineers had successfully placed 70 British tonnes of equipment in place on the Antarctica subglacial Lake Ellsworth. The planned assault on the lake is for December 2012.