Severe weather outbreak is likely this evening (May 31, 2013) across the Central Plains. Strong tornadoes, large hail, and flooding likely. Be safe!

May 31, 2013 4 p.m. CDT (21 UTC): Dangerous storms are expected to develop starting this afternoon and lasting through 11 p.m. CDT tonight for Oklahoma, southeast Kansas, and southwest Missouri. Earlier this morning, the Storm Prediction Center issued a moderate risk for severe weather across these areas with a high probability of seeing strong and violent tornadoes, large hail, and strong winds over 70 miles per hour as the main threat. Hail could be as large as softballs, and the tornadoes that do develop could become long track and violent tornadoes capable of producing winds over 150 miles per hour. All of the ingredients are in place to create dangerous weather conditions that could threaten an area population of over three million.

Here are the risk areas highlighted by the Storm Prediction Center:

As of 3 p.m. CDT, temperatures are already in the upper 80s across Central Oklahoma. Instability is already in place, which acts as fuel for thunderstorms to grow and become intense. Values are currently between 4,500 and 6,000 J/Kg, which is extremely high. Next, wind shear is expected to increase throughout the afternoon and evening, and that will help allow storms to rotate and produce strong winds and tornadoes. The values continue to climb, and today looks like the worst threat since last year when the Storm Prediction Center issued a high risk for severe storms in the Central Plains back on April 14, 2012. Today is certainly the biggest severe threat, by far, we have seen over the past two weeks, and we have had our share of severe weather, including the EF-5 tornado that tore through Moore, Oklahoma last week. 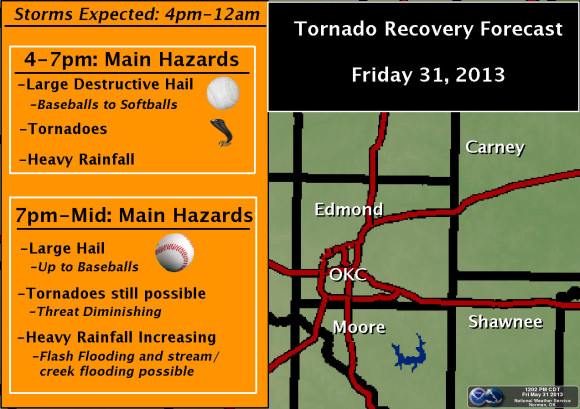 National Weather Service at Norman, Oklahoma created this graphic warning the city of Moore of the severe weather likely to push into the area later today.

Norman, Oklahoma NWS has been extremely active this afternoon tweeting out very valuable information about the upcoming storms likely to affect Central Oklahoma. They have provided plenty of warning well in advance of these storms, and are putting up life saving information for Central Oklahoma. Feel free to follow them on twitter at @NWSNorman. Their last tweet prior to posting this, at 3:40 p.m. CDT, was: 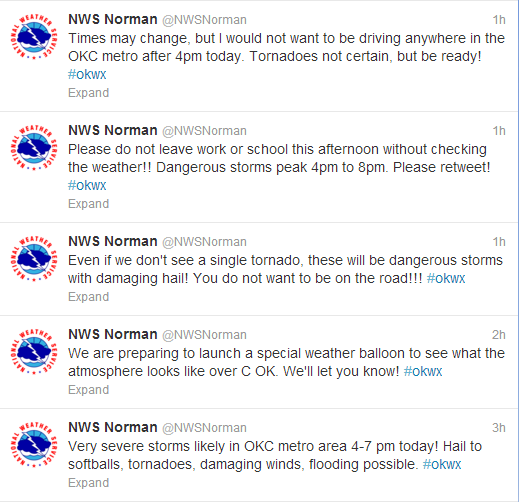 The Norman, Oklahoma NWS office has been extremely active on twitter alerting everyone of the upcoming storms. Follow them at @NWSNorman.

Climatology says that the most significant tornadoes to occur for May 31 is directly in Central Oklahoma, the same area that the Storm Prediction Center is highlighting the biggest threat for strong tornadoes and large, damaging hail. We are in the heart of tornado season for this part of the United States. 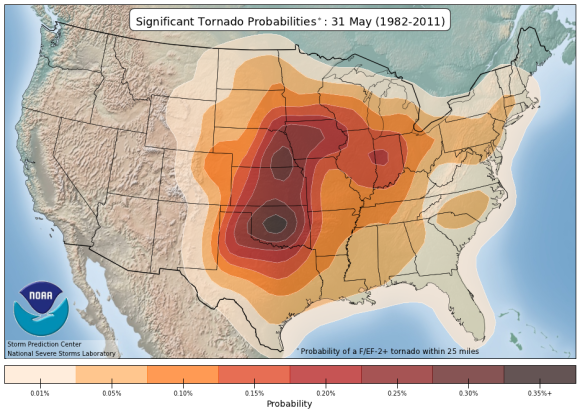 It is quite normal to see strong and significant tornadoes across Central Oklahoma on May 31 based on climatology. Image Credit: Storm Prediction Center

A tornado watch has already been issued for parts of southeast Kansas and southwest Missouri that is expected to expire at 10 p.m. CDT. There is a high chance for tornadoes in this watch area and some of those could be strong. The watch includes the cities of Joplin, Springfield, and Columbia, Missouri. I expect another tornado watch to be issued for Central Oklahoma no later than 4 p.m. CDT. A PDS tornado watch will be issued across Central Oklahoma by 4 p.m. CDT. I urge everyone to avoid driving this evening as supercells and strong tornadoes are likely once the atmosphere is no longer capped and storms can initiate and develop quickly.

PDS watches are rare, and only mean dangerous conditions are likely in the highlighted area. Be safe! Image Credit: SPC

It has been a week full of active severe weather across the Central Plains with several tornado, wind, and hail reports. In fact, you can check out the past four days of preliminary severe weather reports by the Storm Prediction Center below: 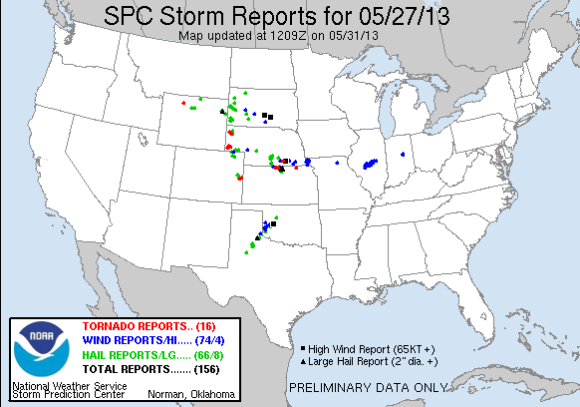 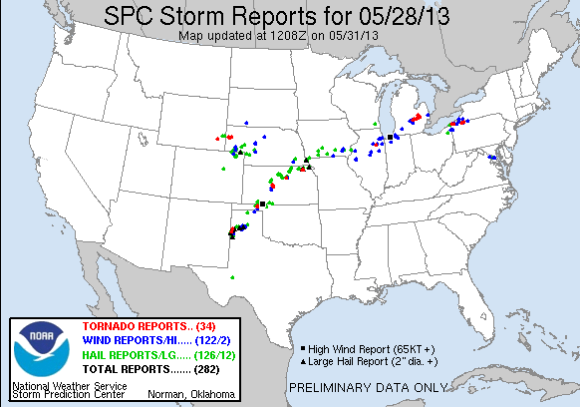 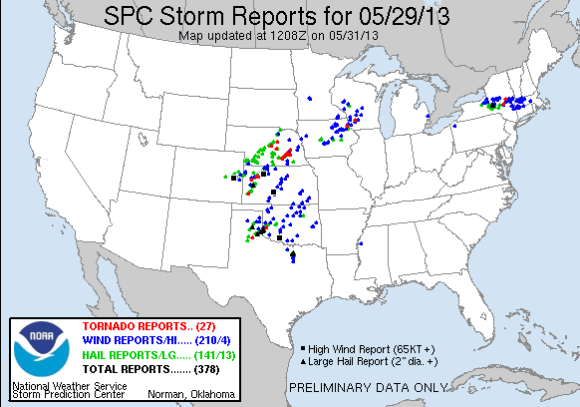 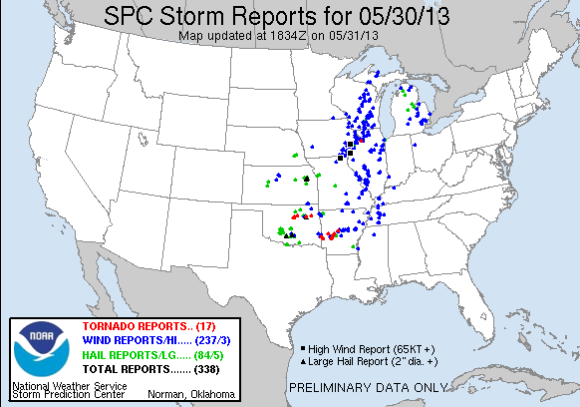 Bottom line: On May 31, 2013 at 4 p.m. CDT, severe weather is breaking out across Oklahoma, Kansas, Missouri, and into the U.S. Midwest. Storms will easily be able to produce baseball to softball size hail, strong winds over 70 mph, heavy rain, and strong to violent tornadoes. It is important that everyone in the risk areas pay close attention to the skies as the storms begin to fire up this evening and continue into the early morning hours of Saturday. Stay safe and have a plan now!

Everything you need to know: Tornado safety