Stormy first weekend of October in the U.S.

Stormy weather is likely Saturday, October 5 in the north-central United States, where a strong cold front will trigger winter weather and severe weather.

A strong area of low pressure is developing across the north-central United States, and will be responsible for blizzard conditions in parts of eastern Wyoming, northwest Nebraska, and across South Dakota. Meanwhile, on the spring side of this storm, severe weather is likely across Minnesota, Iowa, northeast Nebraska, and as far south as central Oklahoma. At least 1.5 million Americans are under a moderate risk for severe weather this weekend. Meanwhile, Tropical Storm Karen will likely impact the U.S. Southeast later this weekend. I’ll go into more details on that storm in another post. For now, all eyes are on the cold front stationed across the central U.S., and it looks like it will be a busy weekend for U.S. weather. It’s a relief that NOAA didn’t shut down completely with other parts of the U.S. government. 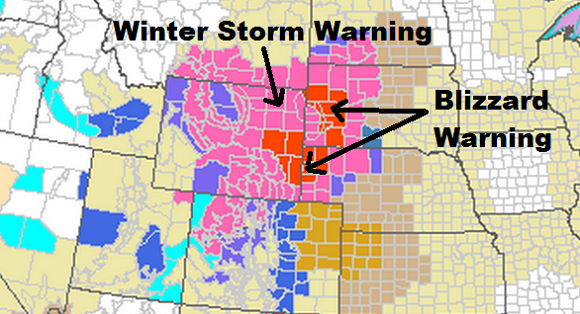 Winter in October? Winter storm and blizzard warnings have been issued for parts of Wyoming, South Dakota, and Nebraska. Image Credit: NOAA

The storm system in the central United States has a spring and a winter side. For Friday, October 4, 2013, severe weather appears likely from central Oklahoma and as far north as South Dakota. The Storm Prediction Center has issued a moderate risk for severe weather for Iowa, northeast Nebraska, and southern Minnesota. Strong winds over 60 mph, large hail, and a few strong to violent tornadoes (EF-3 or higher) are possible. Plenty of moisture, wind shear, and heat will be more than enough to spawn supercells capable of producing a few strong tornadoes late this afternoon (October 4) and into the evening hours as an area of low pressure continues to deepen. Meanwhile, strong winds will be the main threat for parts of Oklahoma and Kansas as the front slowly pushes to the east. Everyone living in the shaded areas below should monitor the weather throughout the day. Fortunately, the National Weather Service will issue warnings and advisories when warranted later this evening.

Slight risk is in yellow while the moderate risk is highlighted in red. Image Credit: Storm Prediction Center

The image below indicates the threat for strong winds on October 4, 2013.

The other side of this system is bringing winter weather throughout South Dakota and Wyoming. Some areas could easily receive one to two feet of snow with sustained winds of 30 to 40 mph with gusts over 50 mph. While this storm develops, travel may be difficult or completely shut down as blizzard conditions develop across eastern Wyoming and western Nebraska and southwestern South Dakota.

Bottom line: Stormy weather is likely Friday, October 4 and Saturday, October 5 as a strong cold front continues to push to the east. It will trigger winter weather and severe weather across north-central United States. Of course, we also have to factor Tropical Storm Karen, which will impact the southeastern United States later this weekend. I will have a full write up about that storm in another post. If you live in the risk areas today, you should monitor the weather and watch for warnings that might be issued by your local National Weather Service Office. Stay safe!