Australian researchers say their new technique will help them find sites where populations of organisms can potentially survive, as rainfall continues to decline. 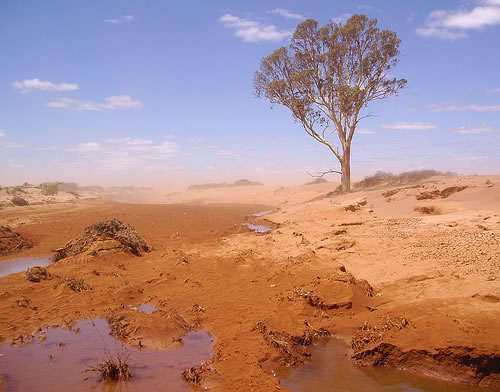 Australia drought photo from 2008, via GreenPacks

The climate in southwestern Australia has been drying for more than 40 years. Residents there are bracing for a continuing drier and warmer trend, according to scientists at the Curtin University Institute for Biodiversity and Climate in Australia. Scientists at that institute have been working on a method to identify potential refugia – that is, areas in which a population of organisms can survive through a period of unfavorable conditions – as rainfall continues to decline in southwestern Australia. They say their newest results – which involved the use of Light Detection And Ranging (LiDAR) instruments – are encouraging. The journal PLOS One published the work in early January 2014.

Grant Wardell-Johnson and Gunnar Keppel, along with former Curtin scientist Tom Schut (now at Wageningen University in the Netherlands) were able to translate a traditional plot observation to an entire landscape. The key, the team said, was finding a strong relationship between three things: vegetation types in southwestern Australa, soil depth and rainfall.

They say their finding means they can now compare current climate and future climates under a continuing trend of reduced rainfall in the region.

In turn, Wardell-Johnson said, this comparison will let them apply expected future changes in rainfall to landscape-scale vegetation and, thereby, find potential sites where populations of organisms could survive.

They say these findings are “essential for conservation efforts.” Wardell-Johnson added:

Global warming is a particular issue in Mediterranean-climate regions. It is especially so in the flat landscapes of south-western Australia – home to a global biodiversity hotspot.

Understanding where refugia will be is of particular importance in light of human-caused global warming, to offer the best chances for our precious flora and fauna in times of transformative change.

Bottom line: Australian scientists are making headway in learning how to predict future safe havens for biodiversity, as climate changes. In particular, they are looking at a technique that will let them apply expected future expected changes in rainfall to landscape-scale vegetation and, thereby, find potential sites where populations of organisms can survive.

Read more about this study via Curtin University